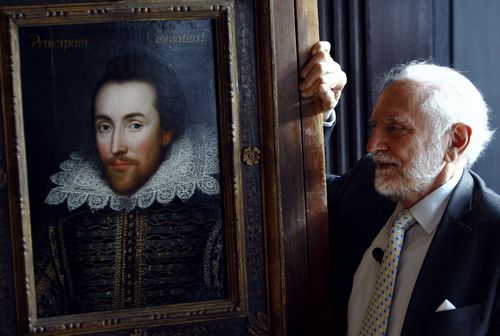 The Bard, or not the Bard? That is the question posed by Monday's unveiling of a centuries-old portrait of a dark-eyed, handsome man in Elizabethan finery.
Experts say it is the only portrait of William Shakespeare painted during his lifetime - in effect, the sole source of our knowledge of what the great man looked like.
But they can't be certain. In the shifting sands of Shakespeare scholarship, where even the authorship of the plays is sometimes disputed, nothing is written in stone.
"We're 90 percent sure that it's Shakespeare," said Paul Edmondson, director of learning at the Shakespeare Learning Trust, which plans to exhibit the portrait in Stratford-on-Avon. "You'll never be entirely certain. There will always be voices of dissent."
Incredibly, the portrait has been in private hands for several centuries but the owners - the Cobbe family - had no idea the man in the painting was responsible for so many enduring masterpieces.
All that changed three years ago, Edmondson said, when one of the Cobbes (he won't say which one) walked into the National Portrait Gallery in London's Trafalgar Square to see a traveling exhibit called "Searching for Shakespeare."
One of the first things he saw was a famous portrait of the Bard that usually hangs in the renowned Folger Shakespeare Library in Washington.
"His jaw dropped," said Edmondson. "He realized he had one at home. And the one he had at home turned out to be the original."
Edmondson said the portrait is far superior to the copies made after Shakespeare's death, including the famous 1623 engraving that graces the cover of the First Folio collection of Shakespeare's plays.
"This is Shakespeare alive, with fresh blood pumping through his veins, painted in his lifetime," Edmondson said with obvious pride. "The copies look dead by comparison."
He said scholars are convinced it is Shakespeare because so many copies of the painting were made, including the one at the Folger, and because the painting was handed down through the generations along with a portrait of the Earl of Southampton, Shakespeare's main patron.
The Cobbe collection curator, Mark Broch, spent three years researching the painting, and several sophisticated tests, including X-ray examinations, tree-ring dating on the wooden frame, and infrared imaging, were made to determine its age.
Impossible to verify
At the Folger Library, art and special collections curator Erin Blake agreed that their Shakespeare portrait is based on the one unveiled Monday, which officials have dubbed "the Cobbe portrait."
But she said it is impossible to verify beyond all doubt that the person in both portraits is Shakespeare, although circumstantial evidence suggests it is.
"It's very difficult," she said. "Not just for portraits of Shakespeare, but for finding documentation to identify portraits of anyone from that age beyond the royal family. The documentation doesn't survive. But people really want to find a portrait of Shakespeare."
She said there are doubts about whether the person in another famous depiction of Shakespeare, known as the Chandos portrait, is really the playwright.
That portrait is housed at the National Portrait Gallery in London.
The person in the Chandos portrait strongly resembles the Shakespeare portrayed in the First Folio engraving. But Edmondson said this does not discredit his assertion that the Cobbe portrait forms the basis of the engraving.
"We don't say the Chandos portrait is not Shakespeare, but it bears no resemblance to ours," he said.
"It's totally separate. It's also posthumous, not a live portrait."
Some scholars claim, however, that the Chandos portrait was, in fact, painted during the Bard's lifetime.
In a separate discovery that is solving other Shakespeare-related mysteries, Museum of London archaeologists said they had uncovered the foundations of the long-buried theater where Shakespeare wrote and performed as an actor.
Museum officials said the rudimentary playhouse, simply called The Theatre, was built in 1576 by actor and theater promoter James Burbage.
The site, where Shakespeare performed from 1594 to 1597, now houses an abandoned warehouse.