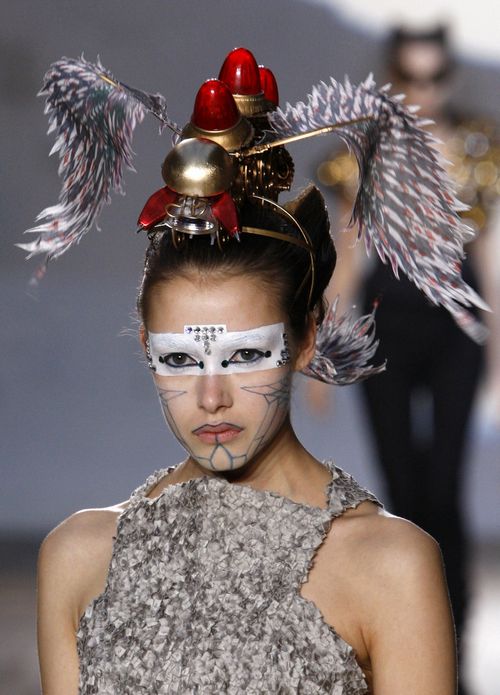 Peacocks strutted their stuff on Paris' catwalks Monday as wildly inventive Indian designer, Manish Arora, unleashed a fantastic menagerie that included a Swarovski crystal-encrusted version of the proud bird.
Picture "The Jungle Book" remade by "The Fly" director David Cronenberg and you can begin to envisage the bizarre menagerie of beasts in hothouse hues that Arora unleashed onto his catwalk.
"The idea was to take everybody on a journey to my jungle, where I belong," Arora said, though the collection looked like less like a product of human ingenuity than something beamed down by aliens or hatched in a petri dish.
Peacocks glinting with Swarovski crystals emblazoned a tunic, a moose-head made from what appeared to be superimposed wooden planks emerged from the belly of a dress, while a nearly life-sized bird of prey - covered in crystals - perched on the shoulder of another dress. The knobby fabric of a cocktail number mimicked a lizard's spiny skin. Mammoth orchids in pinks, purples and reds burst forth from a short dress.
The collection garnered among the most enthusiastic response of any Paris show. The audience cheered and whoops of delight echoed over the booming sound-track, most of which was culled from "Slumdog Millionaire."