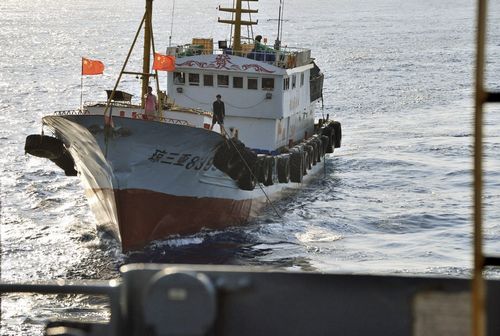 China said yesterday that a U.S. Navy ship involved in a confrontation with its fleet off the southern island of Hainan had violated international and Chinese laws.
Washington had urged China to observe international maritime rules after the Pentagon said five Chinese ships, including a naval vessel, harassed the USNS Impeccable in international waters on Sunday.
"The U.S. claims are gravely in contravention of the facts and confuse black and white and they are totally unacceptable to China," Chinese Foreign Ministry spokesman Ma Zhaoxu told a regular news briefing.
But the confrontation was unlikely to do lasting damage to ties between two countries as they combat the global economic slump, a Chinese analyst in Beijing said.
Denny Roy, a U.S.-based expert on Asia-Pacific security, said the confrontation did not appear accidental, and was rather China's way of sending a message to Washington that it wanted respect for its growing military reach in the region.
"I don't think this happened spontaneously," said Roy, of the East-West Center in Honolulu, Hawaii, "No doubt it had the endorsement of central leaders in Beijing."
The latest row suggests Beijing will take a tougher stance as its naval ambitions grow, said analyst Shi Yinhong.
"The United States is present everywhere on the world's seas, but these kinds of incidents may grow as China's naval activities expand," Shi, an expert on regional security at Renmin University in Beijing, said.
The Chinese vessels "shadowed and aggressively manoeuvred in dangerously close proximity" to the USNS Impeccable, an unarmed ocean surveillance vessel, with one ship coming within 7.6m, a U.S. Defense Department statement said.
Tropical Hainan, less than 100km south of the mainland, hosts a Chinese naval base that houses ballistic missile submarines, according to independent analysts.
An unnamed spokesman for the Chinese embassy in Washington earlier denied the Chinese ships had violated maritime rules and said U.S. ships had been conducting illegal surveying, the website of Hong Kong-based Phoenix Television reported.
It said the incident happened 120km south of the island.
Ma said there were laws about scientific research in Chinese waters.
The U.S. ship "violated the relevant international laws and Chinese laws and regulations," he said, urging the United States to halt such action. U.S. defense officials said the incident followed days of increasingly aggressive Chinese conduct in the area, including fly-bys by Chinese maritime surveillance planes.
It comes just weeks after the two sides resumed military talks, postponed in November after a U.S. announcement of arms sales to Taiwan, a self-ruled island China claims as its own.
And it echoes a stand-off in 2001 between U.S. and Chinese military forces after a U.S. spy plane made an emergency landing on Hainan after a collision with a Chinese fighter jet. China released 24 crew after a U.S. expression of regret.
China's national parliament, now in annual session, is set to approve a military budget increase of 14.9 percent more than spending in 2008, bringing announced People's Liberation Army funds to 480.7 billion yuan (US$70 billion). Many foreign experts believe its real budget is much higher.
Some of that extra money may go to developing China's first aircraft carrier - the trophy ship of an ambitious sea power - senior naval officers have recently suggested.
"Go and ask the Americans, ask their embassy," Vice Admiral Jin Mao, former Navy vice commander in chief, told Reuters on the sidelines of parliament when asked about the incident. "Ask their officials what their ship was doing in Chinese waters."
The Impeccable is one of five ocean surveillance ships that serve with the U.S. 7th Fleet, based in Yokosuka, Japan. The ships use low-frequency sound to search for undersea threats including submarines, a U.S. military official said.
A U.S. Defense Department spokesman said the Chinese vessels had surrounded the Impeccable, waving Chinese flags and telling the U.S. ship to leave. The Pentagon also described accounts of half a dozen other incidents dating back to March 4.
Analyst Shi said the seas off Hainan were important to China's projection of its influence with a modern naval fleet.
"The change is in China's attitude. This reflects the hardening line in Chinese foreign policy and the importance we attach to the strategic value of the South China Sea."