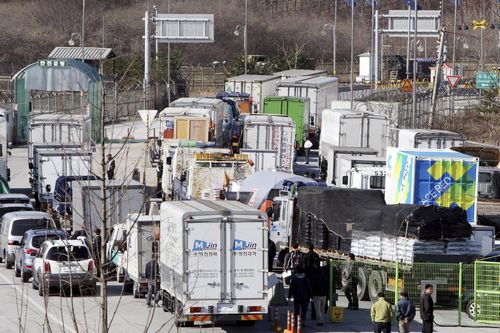 North Korea yesterday reopened its border to South Koreans working at a joint industrial estate, one day after shutting the frontier and accusing Seoul and Washington of planning a war.
"Cross-border trips by people and vehicles to and from the Kaesong industrial complex ... have returned to normal," said Seoul's unification ministry spokesman Kim Ho-Nyoun.
On Monday the North announced it was switching off military phone and fax lines, which are used to approve border crossings, in anger at a major U.S.-South Korean exercise from March 9-20 which it sees as a rehearsal for invasion.
The decision stranded 80 South Koreans who intended to return that day from Kaesong, a Seoul-funded joint industrial estate built just north of the border as a symbol of cooperation.
The North's latest decision is likely to ease cross-border tensions somewhat, a day after it put its 1.2 million-member military on combat alert in response to the military drill.
But the ruling party newspaper Rodong Sinmun denounced the exercise again yesterday.
"The frantic nuclear war exercises of the U.S. warmongers compel the DPRK (North Korea) to bolster up its war deterrent," it said, using a phrase which often refers to its nuclear weapons program.
Pyongyang has also warned that any attempt to block what it calls an upcoming satellite launch would spark a war.
The North says the exercise involving tens of thouands of troops is aimed at launching a "second Korean War" while Seoul and its ally Washington insist it is a routine annual defensive drill.
U.S. State Department spokesman Robert Wood said the drill was not a threat to the North.
"What is a threat to the region is this bellicose rhetoric coming out of the North," Wood said on Monday in Washington, urging Pyongyang to return to stalled six-nation nuclear disarmament talks.
The agreement to reopen the border came after South Korean factory owners sent a written appeal.
"We asked the North not to hold the Kaesong complex hostage," Yoo Chang-Geun, vice chairman of the Corporation of Kaesong Industrial Council, said.
"We requested that business activities in Kaesong should not be swayed by any political situations. In the morning today (Tuesday), we received a message from the North that the immigration work will resume from 10:00 a.m."
About 39,000 North Koreans work in 98 South Korean firms at Kaesong, producing items such as watches, clothes, shoes and kitchenware.
Ministry spokesman Kim said the North sent two written messages but military communication lines remain cut off. The North said it was severing them for the duration of the exercise.
Baek Seung-Joo, of the Korea Institute for defense Analyses, said the North apparently feared negative publicity had they stopped South Koreans from travelling home.
"They decided to quickly fend off such a possible negative national image. Therefore they decided to quickly reopen the border," he said.
"Otherwise, they know well, it would be lethal to the survival of the regime," he said, adding that international aid could have dried up.