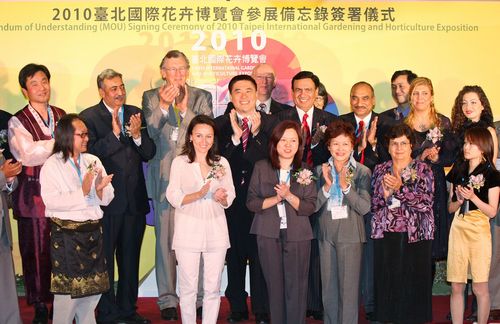 Taipei Mayor Hau Lung-bin signed a Memorandum of Understanding yesterday at the Grand Hotel with representatives of 23 organizations from 16 nations around the world that take the city one step closer to realizing the 2010 Taipei International Garden & Horticulture Exposition next year.
The MOU sets the stage for the 2010 Exposition, a giant undertaking which will feature 14 halls under four different themes and is expected to draw 300,000 visitors during the course of its run from Nov. 26, 2010, to April 25, 2011. The exposition will generate an estimated 60,000 jobs and NT$21 billion in business over its five-month span. The exposition will take place in four different locations including Yuanshan Park below the Grand Hotel, Taipei Artistic Park near the Taipei Fine Arts Museum, Xinsheng Park and Dajia Riverside Park.
The signing of the agreement takes place on the first day of the World Congress of the International Association of Horticulture Producers (AIPH), which is being held this week at the Grand Hotel. AIPH brings together representatives from nations around the world to discuss topics related to the production and marketing of flowers and plants and various agricultural products.
Mayor Hau expressed his great delight at meeting the AIPH members and other guests, emphasizing that Taipei is acting on behalf of growers and producers from all over Taiwan in hosting the World Congress and presenting the 2009 Taipei International Flower Exposition, which is taking place at the same time. He noted that construction is already underway on the venues for the 2010 Exposition and that organizers expect to add even more organizations and countries to the list of participants, including mainland China. The Mayor's remarks were echoed by Dr. Doeke Faber, Director of AIPH, who noted that the MOU will promote friend-ship among the participants and serve as a starting point for future developments and exchanges.