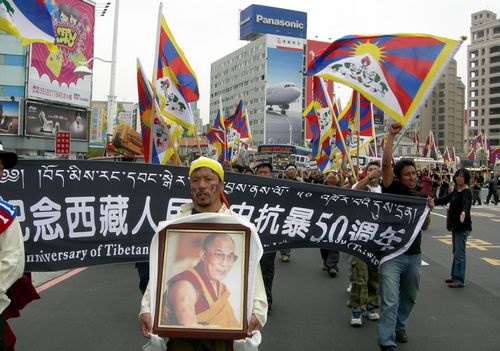 The Dalai Lama would like to visit Taiwan again, but there are no immediate plans to do so, his representative in Taipei told reporters on the 50th anniversary yesterday of the failed Tibetan uprising against Chinese Communist rule.
The religious leader told a visiting delegation of the Association of Taiwan Journalists Monday that he welcomed their invitation to visit the country again, but Dawa Tsering, his representative in Taiwan, said the Dalai Lama had only been expressing his wish.
The Dalai Lama visited Taiwan twice, in 1997 and 2001, meeting the respective presidents of the time, Lee Teng-hui and Chen Shui-bian.
Current President Ma Ying-jeou is reportedly reluctant to see the Dalai Lama visiting soon because it might intervene with the rapid pace of rapprochement with China he has been implementing since taking office last May.
Wherever the Dalai Lama goes, he will follow the wishes of his hosts, Dawa Tsering told reporters yesterday. There were no concrete plans for the time being, and the Dalai Lama had not filed a request to visit with the Taiwanese authorities, the representative said.
The opposition Democratic Progressive Party has shown no reluctance in applauding the Dalai Lama, holding Tibet Days in different parts of the country yesterday.
DPP chairwoman Tsai Ing-wen attended the event in Kaohsiung, where Mayor Chen Chu and Dawa Tsering raised the Tibetan flag together. Several Tibetan human rights campaigners had come over from India for the ceremony.
Chen also unveiled new signs for the local Tibet Street, adding the more Tibetan-sounding name "Tubo" to the traditional Chinese word for Tibet, "Xizang."
Dawa Tsering read statements from the Dalai Lama, while documentaries showing the suffering of the Tibetan people under Chinese oppression were also shown.
Neighboring Kaohsiung County also proclaimed March 10 as Tibet Day.
In the capital Taipei, supporters of the Tibetan cause started a candlelight vigil on Liberty Square yesterday evening. Pictures of 50 martyrs and political prisoners formed the figure 50, organizers said.
The commemorative activities also come close to the first anniversary of Tibetan protests against Chinese rule last March 14, in the run-up to the Beijing Olympics. An estimated 200 people died in the clashes, and more than 6,000 protesters were arrested.
President Ma Ying-jeou, then still in the final days of his election campaign, did not rule out a Taiwanese boycott of the Olympics at the time, but since taking office, he has been leaning one-sidedly in China's favor, Kaohsiung County Magistrate Yang Chiu-hsing said.
The Cabinet-level Mongolian and Tibetan Affairs Commission said yesterday it was devoting three days this week beginning today to solve the residency problems of about 100 Tibetans.
The refugees protested last year against their uncertain status, leading the government to promise them residency permits. The National Immigration Agency was setting up a special team to receive the applications in Luchu, Taoyuan County.