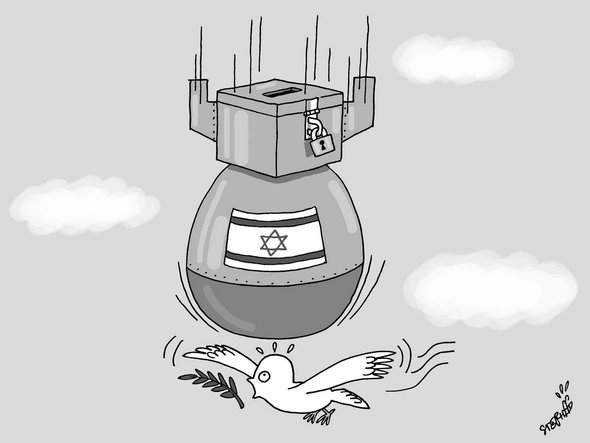 In three weeks of incessant bombardment, Israel killed or injured more than 6,000 Palestinians in Gaza, most of them civilians, and a third of them children.
It pushed the territory it has militarily controlled for four decades (and for the welfare of whose population international law holds it legally accountable) even deeper into deliberately engineered, even fine-tuned, misery.
It wrecked much of what was left of Gaza's civilian infrastructure after months of siege and years of isolation from the outside world; it smashed thousands of family homes, schools, offices and mosques; it obliterated the personal property of tens of thousands of refugees - many of whom have now lost two or three homes in succession to Israeli bombs.
Israel's primary justification for the bombardment of Gaza was that it was intended to stop Palestinian rockets fired into Israeli territory.
But Israel failed to accomplish a single one of its declared objectives. It failed to stop the firing of rockets from Gaza. It failed to stop smuggling across the Egypt-Gaza border. And it failed, even in the short run, to bring security to Israel's own population.
If anything, the bombardment of Gaza left Hamas stronger than ever, for having stood up to three weeks of bombardment and preventing the Israeli army from translating its overwhelming firepower superiority into actual accomplishments on the battlefield - of which there were none, other than crude destruction.
Point of attack
It left the aging leadership of Fatah - still pleading for a return to the so-called road map to peace, which was supposed to have led to a Palestinian state four years ago - looking more pathetic and desperately servile than ever.
What then was the point of the Israeli assault on Gaza?
The sheer scale of the violence Israel unleashed on that territory's hapless population may, in itself, provide some answer to that question, precisely because, for all its ferocity, it failed to accomplish any of its declared objectives.
Consider, then, that for three weeks Israel showered high explosives, white phosphorous and other advanced munitions from land, sea and air on the packed residential neighborhoods of one of the most densely populated areas on Earth, in sweeping disregard for the principles of international humanitarian law.
Knowing full well that the residents of those neighborhoods lack any real form of shelter, it denied them even the last desperate right normally afforded to civilians in a war zone - the ability to flee to safety. The 1.5 million residents of Gaza were thus locked into what Israel turned into a free-fire zone, and bombarded around the clock.
Providing answers
Consider, further, that the people who went through this bombardment were already hungry, thirsty and cold from months of deprivation caused by Israel's siege of Gaza.
Consider, also, that half of the people who suffered through all this were children.
And consider, finally, who all these people are and what they are doing in Gaza in the first place. That may provide an answer to the question.
The majority of Gaza's population consists of refugees or their descendants who were driven from the formerly multireligious, multicultural land known as Palestine, which was turned into an exclusively Jewish state in 1948.
As Muslims and Christian Palestinians, they would have outnumbered the Jewish residents - most of them then immigrants from Europe - of the new state that wanted to claim an exclusive Jewish identity. Had they remained, the state wouldn't have been Jewish after all. So they had to go. Were they to be allowed back to their homes now, Israel would, again, lose its claim to an exclusively Jewish character. They are, in short, regarded by Israel as an excess population.
Making sense
Seen in that way, all the steps that Israel has taken toward this population over the years - isolation, imprisonment, blockade, impoverishment, deprivation, denial, starvation, death and destruction - suddenly make a kind of twisted sense.
Clearly, the aim of the bombardment of Gaza wasn't to extirpate this population. But it was intended to pound them, and all other Palestinians, into submission, to make them give up their call for self-determination and justice. It was intended to extirpate them in a symbolic sense - a kind of politicide, to use the term coined by the Israeli sociologist Baruch Kimmerling.
And on this score, too, Israel failed.
The Palestinian people have never been more united, and never been more determined in their threefold demand: That Israel end its occupation of Palestinian land; that it end its repression of its Palestinian minority; and that it end its denial of the moral and legal right of return for those Palestinians who were removed from their homes in 1948.
Only when all three conditions are fulfilled will there be a just and lasting peace.