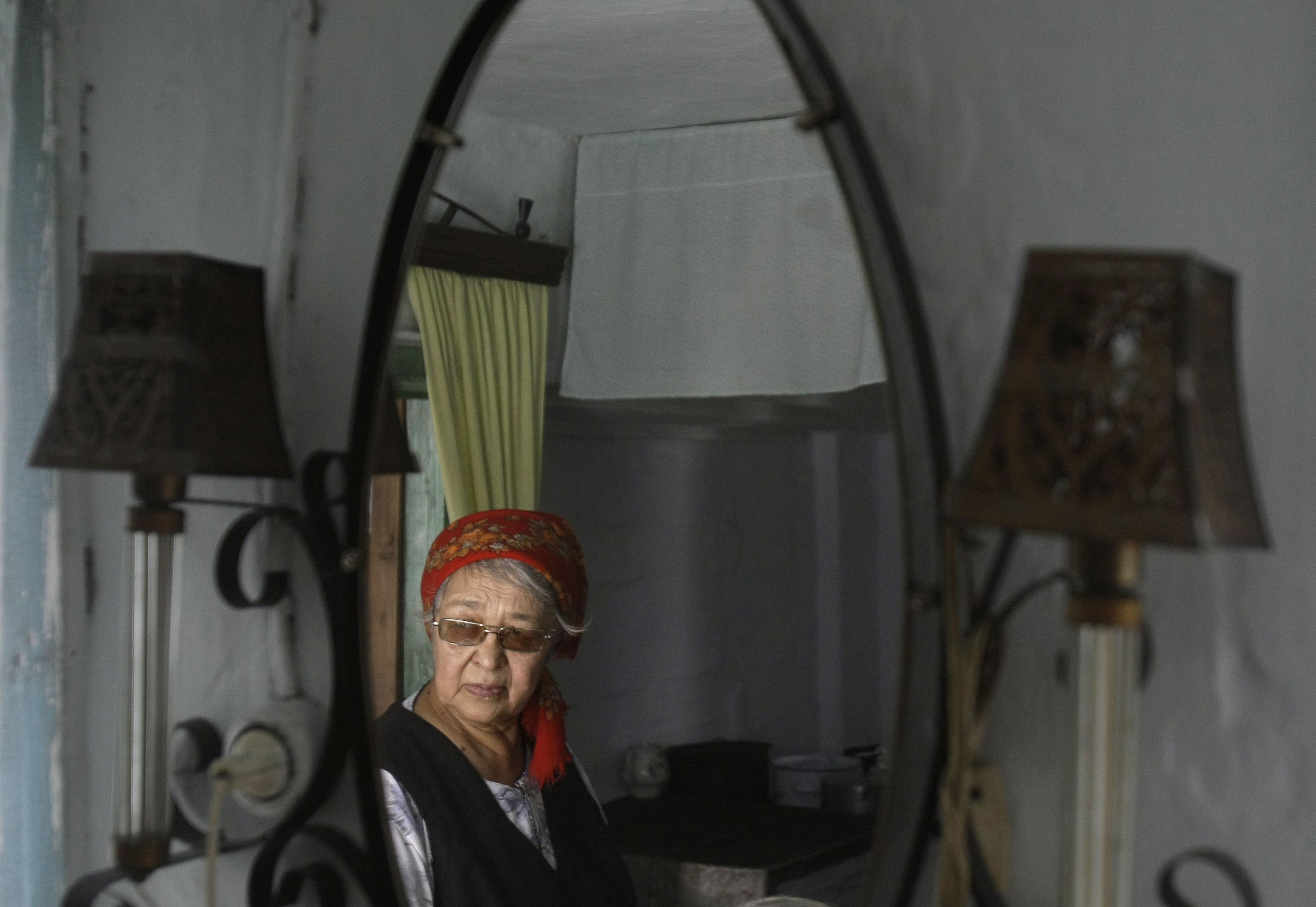 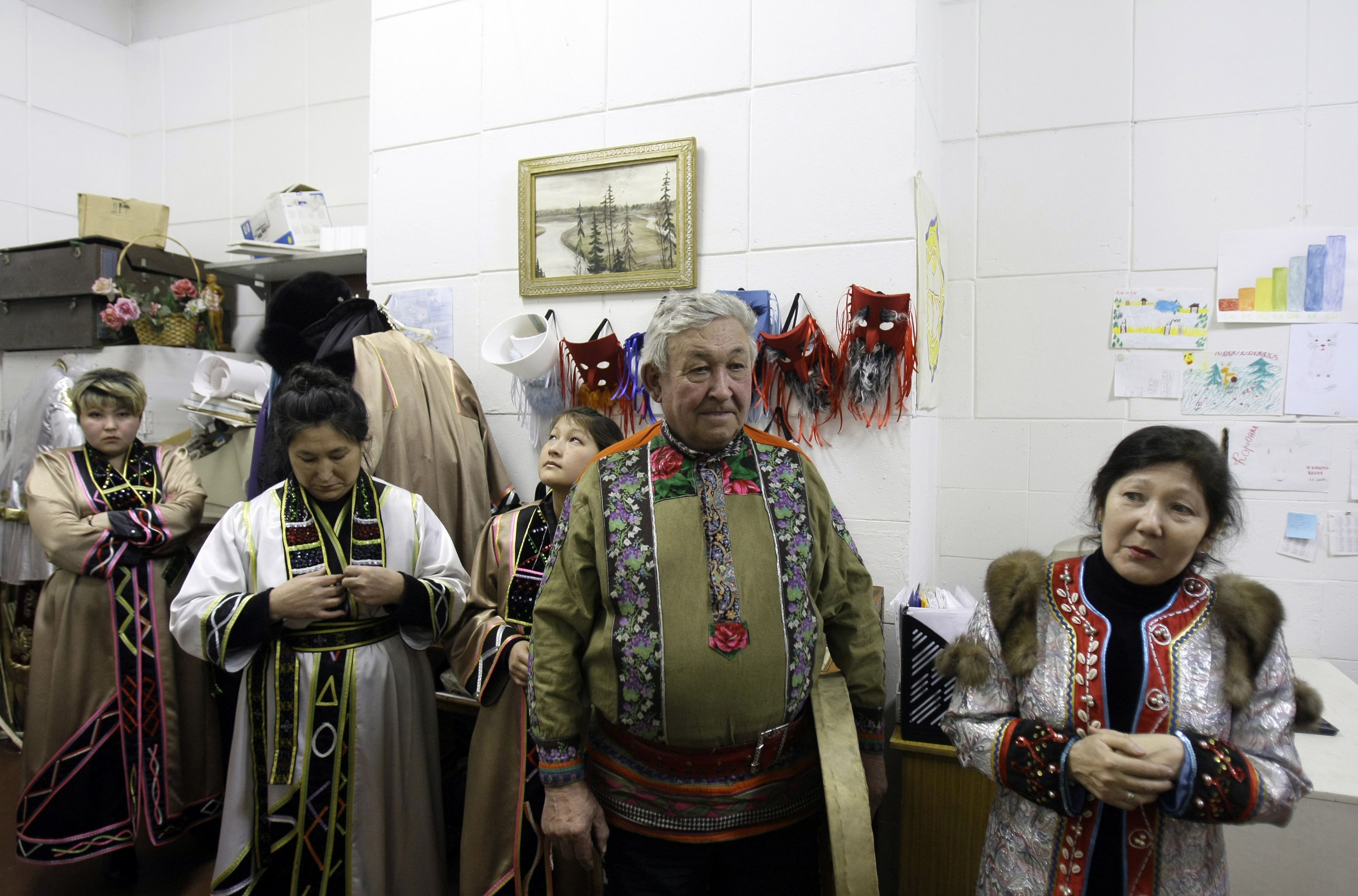 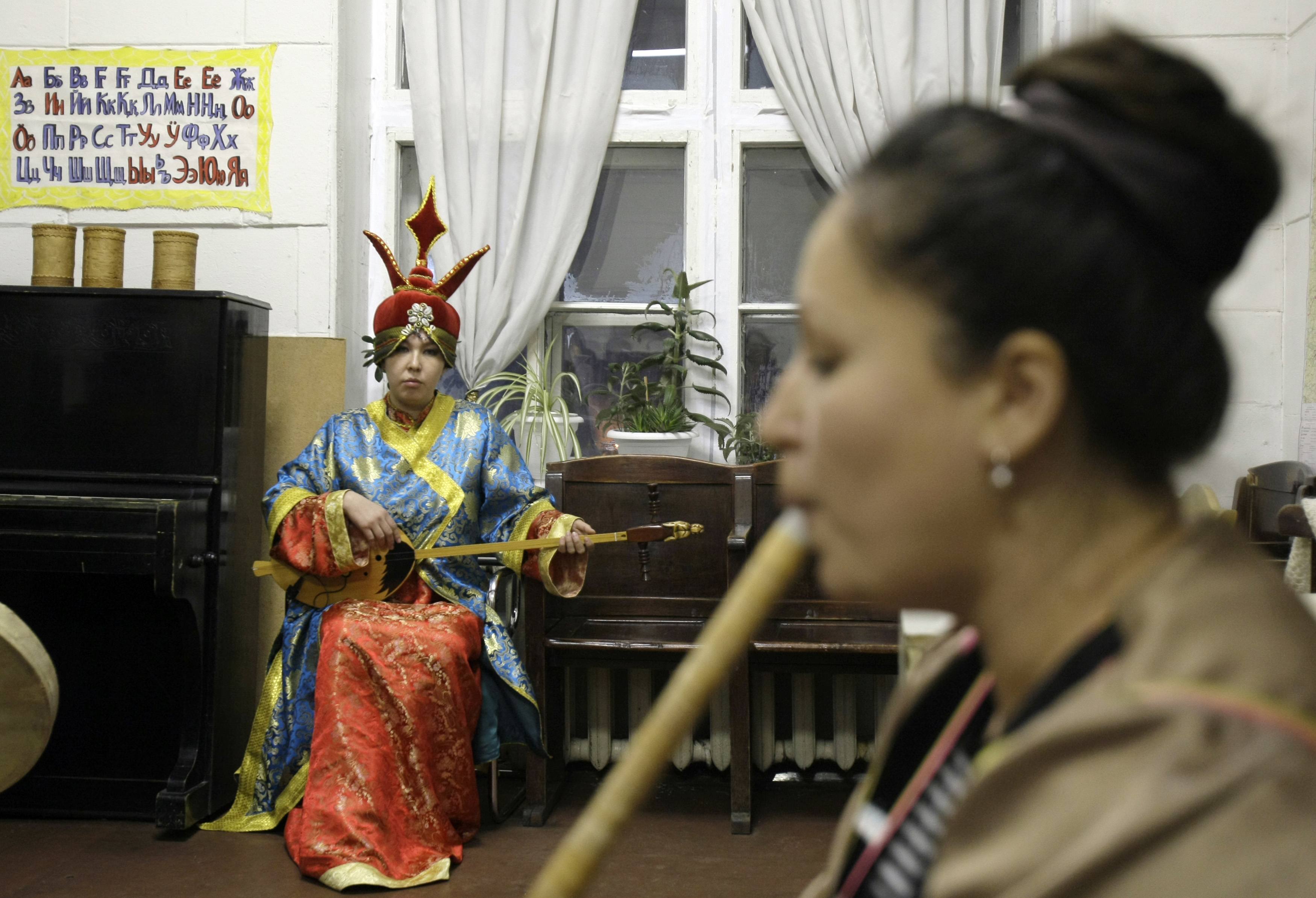 When Olga Tannagasheva starts to sing, her gentle voice transforms into a bass-line growl designed to invoke other-worldly spirits.
Tannagasheva, one of Russia's 14,000 remaining Shors, also wants to communicate with modern Russians, as her ancient culture strives to reassert itself after decades of Soviet repression and enduring economic hardship.
Performing under the pseudonym Chyltys, meaning 'star' in the Shor language, in blue, red and gold silks and a three-pointed hat, Tannagasheva's style of throat-singing is popular with epic performers that draw on shamanist traditions. In Shor culture, such epic songs could last for several days.
"Whenever I travel, people ask me: 'Who are the Shors?'" she said. "They think we come from China!"
The Shor people are descended from various Turkic tribes that migrated to the mountains of southwest Siberia from Central Asia. They had no unified identity until the mid-19th century, when the tribes, skilled horsemen and hunters, amalgamated.
Nicknamed the Blacksmith Tatars for their talent in fashioning tools from local iron deposits, they were granted their own mountain region, Gornaya Shoria, in 1926. Thirteen years later, Soviet leader Josef Stalin scrubbed it from the map.
"It was the policy of our government, of Stalin. Nobody ever explained this decision or apologized to us," said Nadezhda Pechenina, director of the Shor information center.
The natural resources that once defined the Shors were also responsible for their downfall. Stalin flooded the region with other nationalities to exploit rich iron ore and coal seams for the steel mills that still dominate the city of Novokuznetsk.
"There was an entire period of Russification," said Gennady Kostochakov, a lecturer at the Shor language faculty in Novokuznetsk's teaching academy.
"The incoming urban population was all Russian-speaking, even though they were of different nationalities."
But the Shor language, outlawed by Stalin, is making a comeback. Kostochakov, wearing a pinstriped blazer over a Puma sweater, has 15 first-year students in his class. About 140 people have graduated from his faculty in the last 20 years.
"When I graduate, I want to become a Shor language teacher," said first-year student Nadezhda Sharagasheva. "Why should I, as a real Shor, not know my own native language?"
Hardship
The Shors, also renowned for fishing, settled in valleys along the Tom River and its tributaries, the Mras-Su and Kondoma. Men and women inhabited separate quarters inside the cramped huts they fashioned from birch branches.
About 11,500 Shors, over 80 percent of the group, live today in this part of Kemerovo region, 3,000 km (1,875 miles) from Moscow. Most of them live in the mountain town of Tashtagol.
Industrial towns, like coal-mining center Mezhdurechensk, have swallowed up many of the original villages, but 90 small settlements remain where over half the residents are Shors.
Chuvashka is one. Leonid Aponkin, 70, lives there with his wife, Rufina. They draw water from a well in their garden and fill the stove in the corner of their living room with coal brought in bags from an opencast mine nearby.
"This was once purely a Shor village. My grandmother didn't even speak any Russian," Aponkin, a retired engineer dressed in a blazer, said inside his snowbound wooden cottage. "They started teaching only in Russian and banned use of the Shor language. But there was no real discrimination."
The Aponkins each receive a monthly pension of 4,000 roubles (US$136), which Rufina says is sufficient to live on. Her husband studied in the Siberian city of Tomsk and worked in Kyzyl, capital of the Russian republic of Tuva.
The family album of sepia-tinted photographs includes portraits on Red Square and Sochi's Black Sea coast, revealing how the Aponkins assimilated into Soviet society before retiring to their home village.
But it is also telling that they left their homeland to find work. The depletion of alluvial gold in the rivers and the collapse of state industrial holdings have contributed to unemployment rates of 95 percent in remote Shor villages.
"Our living standards are the lowest in the region. Scholars consider our demographic situation to be critical," said Pechenina, also a former deputy in the Kemerovo administration.
"Chuvashka is an exception in that it has electricity."
Shamanists turned Christian
Urban Shors have launched a monthly newsletter to inform villagers, many of whom live without television or the internet, of events in the wider world. It's in Russian, because printing costs were too high for an edition in the Shor language.
The Shors, without a republic of their own, have less autonomy than other Siberian ethnic groups. Neighboring Altai and Khakassia each have their own republics.
Novokuznetsk, the region's largest city with a population of over 500,000, is dominated by heavy industry. It hosts two giant steel mills, as well as an aluminum smelter and coal mines.
Not far from the city's original, 1930s-era steel plant, a Shor cultural group meets regularly on the top story of a theater to celebrate their culture and prepare for their next New Year celebration on March 21-22.
The Shors were originally shamanists, although their belief in the spirit world has co-existed with Christianity for centuries after the first Europeans arrived in the region. Now, many are Russian Orthodox Christians first and foremost.
The epic songs are an enduring fragment of the culture, often accompanied by a two-stringed wooden instrument known as the kai-komus.
Carole Pegg, a musician and lecturer at Cambridge University, says epic performance traditionally offers a way for the narrator to reach beyond the living world.
"It's not speaking and it's not singing. It's a particular sound that is designed to communicate with other levels of the universe - spirits and the epic heroes," said Pegg, an expert on Inner Asian music who has lived in neighboring Altai region.
"It's a sound that is produced for a reason. It opens up pathways to other levels of reality and that enables the epic performer to then travel to those other levels."