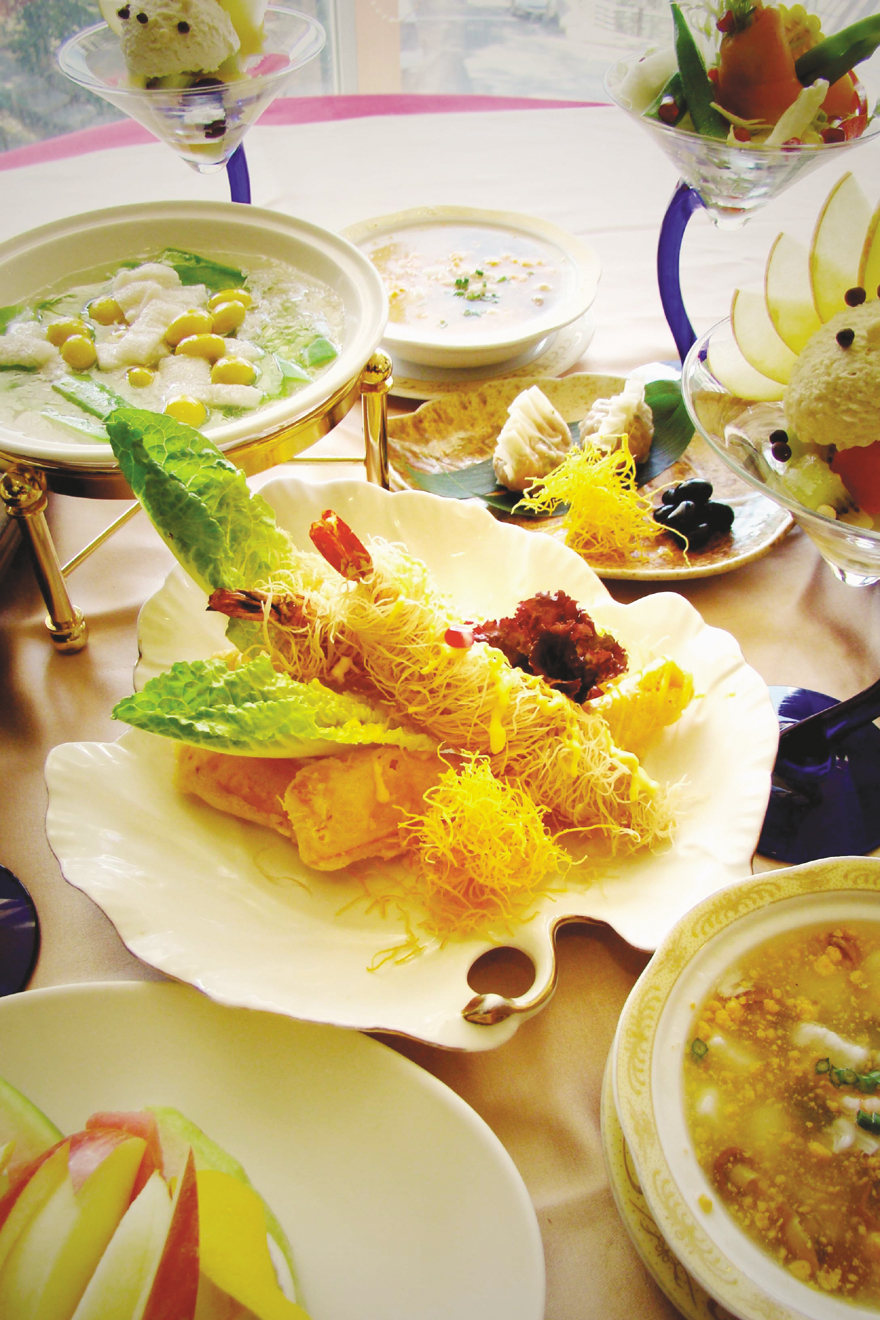 Year-end "wei ya" parties this winter are keeping the atmosphere at the Spa Spring Resort in Beitou very upbeat and warm. Fine dining, karaoke singing and a good soaking in the sulphur hot spring either before or after the feasting are coming together to make a perfect package, filling the corporate need for a reward and physical pampering to offer to employees after a year of hard work.
The Japanese colonizers brought the "onsen" culture to Taiwan. The opening of the first hot spring place in Beitou back in 1896 marked the birth of the hot spring culture on the island. Beitou quickly became a popular hot spring site for the leisurely indulgence and relaxation of the Japanese.
Beitou, however, fell into disrepute as entertainment area over the years. Women ready not just to keep drinking men company but also to dispense sexual favors dragged down with them Beitou's reputation. Eventually business fell into doldrums.
In 1998, however, the Nan Guo Hotel in Beitou reopened as the fully renovated Spring City Resort, seeking to launch a new chapter in responding to the modern and healthy clamor for physical therapy and rejuvenation in a hot spring resort. The management of Spa Spring Resort quickly adopted the hotel's success formula, acquiring another old hotel in Beitou not long after to initiate all-out renovation, too.
Only long existing hotels are known to have water pipe systems connected directly to the hot springs of Beitou. New hotels in Beitou do not have similar access.
"Experts in facilities for water therapy and treatment were hired to redesign the place," recalled John Chiu, the deputy general manager of Spa Spring Resort. "The entire project required an investment of NT$500 million."
Since its inauguration in 2000, the Spa Spring Resort has been attracting entire families as well as groups of friends to have a spash in the four outdoor pools filled with water of varying water temperatures. The water is about 70 to 80 centimeters deep. Bathers can sit comfortably in the water while watching the sun set at the end of the day or looking at the stars shine in the firmament at night. The wearing of bathing suits and trunks is required here.
"The high acidity of the rather rare sulphur hot spring water kills bacteria," pointed out Chiu. "It also removes dead skin cells."
Chiu, however, warned individuals with sensitive skin to watch out for redness, swelling and even itchiness of the skin after exposure to the sulphur hot spring water. Gradual conditioning of the epidermis to the water's acidity by repeatedly going into and then getting out of the pool is suggested. Those with open wounds and cuts are discouraged from plunging into the pool.
Stark naked bathing used to be possible in a public pool. But the men and women were segregated. Such soaking preference of loving couples and romantic twosomes is now confined to the private rooms. The resort even provides a special milk lotion to enable couples to have a milk bath before winding up a relaxing hot spring session.
"Only last December, the 54 rooms measuring from 8 pings to 20 pings in size at the Spa Spring Resort underwent another round of interior design," said Chiu. "Forty-four of the rooms have been fitted with special white fiberglass bath tubs. Colorful lighting changes and bubbling water are features contributing nowadays to a special bathing ambience and experience. Only 10 of the rooms have kept the original tubs of dark Kuan Yin rocks traditionally associated with hot spring bath houses."
Two hours of bathing in a private room at the Spa Spring Resort cost NT$1,380 on weekdays. The price applies even on weekends but guests get to use the private facilities for only an hour and a half. The room rates for those who wish to stay and not just have a splash vary from NT$3,380 to NT$4,980 to NT$6,980 per weekday. The weekend prices require an additional NT$1,000. The use of the public pools costs NT$360 on weekdays and NT$460 on weekends.
An appetizing six-course menu, possibly including lobster and fish, can make the mouth water. A table for 10 starts at NT$8,000. Individual set menu costs NT$899 or NT$1,288. A soaking in the public pool to wash away the work pressure is a giveaway perk.
Function rooms on the fifth floor are flexible in size. Musicians can be arranged beforehand to accompany the would-be singing stars during the private parties.
The Spa Spring Resort is located at 283 Guangming Road in Beitou. There is a shuttle bus service from the New Beitou MRT Station every hour. For reservations, call tel. (02)2897-9060.
The Burgary Hotel (tel. 02-2382-1314) under the same management is located at 168 Zhonghua Road, Sec. 1, near the Ximen MRT Station in downtown Taipei. The hotel with beautiful rooms is also offering a special "wei ya" package.