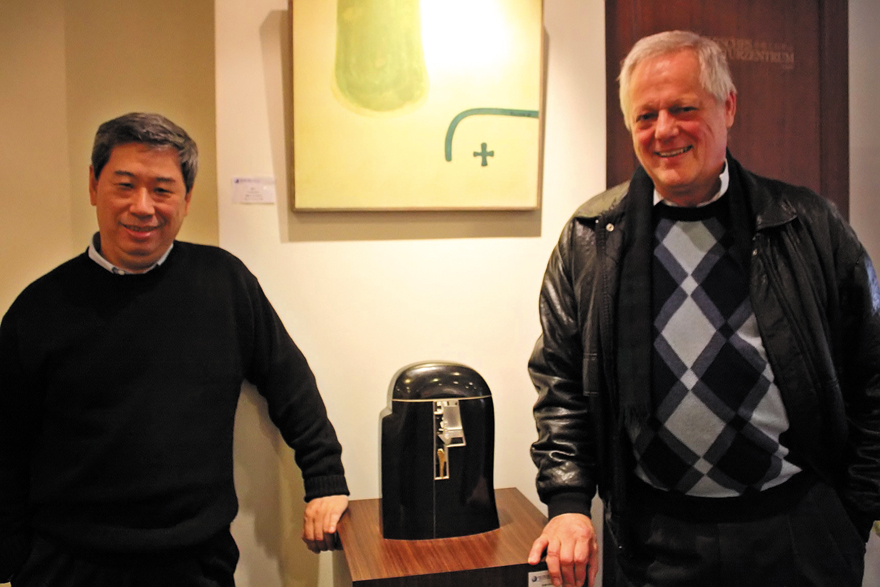 Breaking the stereotypes of metal artwork, artist Ruan Weng-mong's current solo exhibition at the German Culture Center in Taipei presents the power and beauty of metal artwork in different dimensions.
Ruan (left) received his training as a goldsmith in Germany and has stayed in Germany for nearly 30 years to master the craft of making metal artworks. His creation gives a strong hint of Austronesian elements, and is often charged with philosophical meanings.
Using different techniques and materials to create metal artwork, Ruan was the first local artist to apply color anodizing on metal artwork, which greatly influenced later developments in Taiwan's craft industry.
Ruan has been exhibited in Taipei several times.
In the solo exhibition titled "The Magic of Metal" at the German Culture Center, Ruan presents works made from a large array of metals, including gold, silver, cooper, marble, aluminum, etc., as well as jewelries, paintings, and sculptures that are unique in style. More than 50 objects are featured in the exhibition.
Jurgen Gerbig (right), Director of the German Cultural Center in Taipei, said Ruan's works are being exhibited at the center because Ruan is a very unusual and excellent example of German-Taiwanese culture exchange.
"Ruan is very much influenced by certain German aspects, one of them is accuracy, precision, and perfection. Ruan is a perfectionist in certain ways. Ruan has retained this Taiwanese-Pacific source from which he comes, and he's thinking in his art," Gerbig said.
"Ruan is a very good and striking example of German-Taiwan culture exchange in that he combines and embodies the two worlds," the director added.
Gerbig said it took more than two years to prepare for the exhibition. Ruan had to create many new art works for this exhibition.
The artist said he always wants to present the most beautiful aspects of metal, therefore he creates sculptures and paintings by using different metal materials.
"I never think about whether I would be making a fortune by making metal artwork. All I want is to look inwards to search a form of 唼elf-expression.' Of course it costs less money to create stone or wooden artwork, but only metal artwork can be permanently appreciated and preserved," Ruan said.
Ruan's exhibition will run at the center until Jan. 23, 2009. Call (02) 2365-7294 for more detailed information.