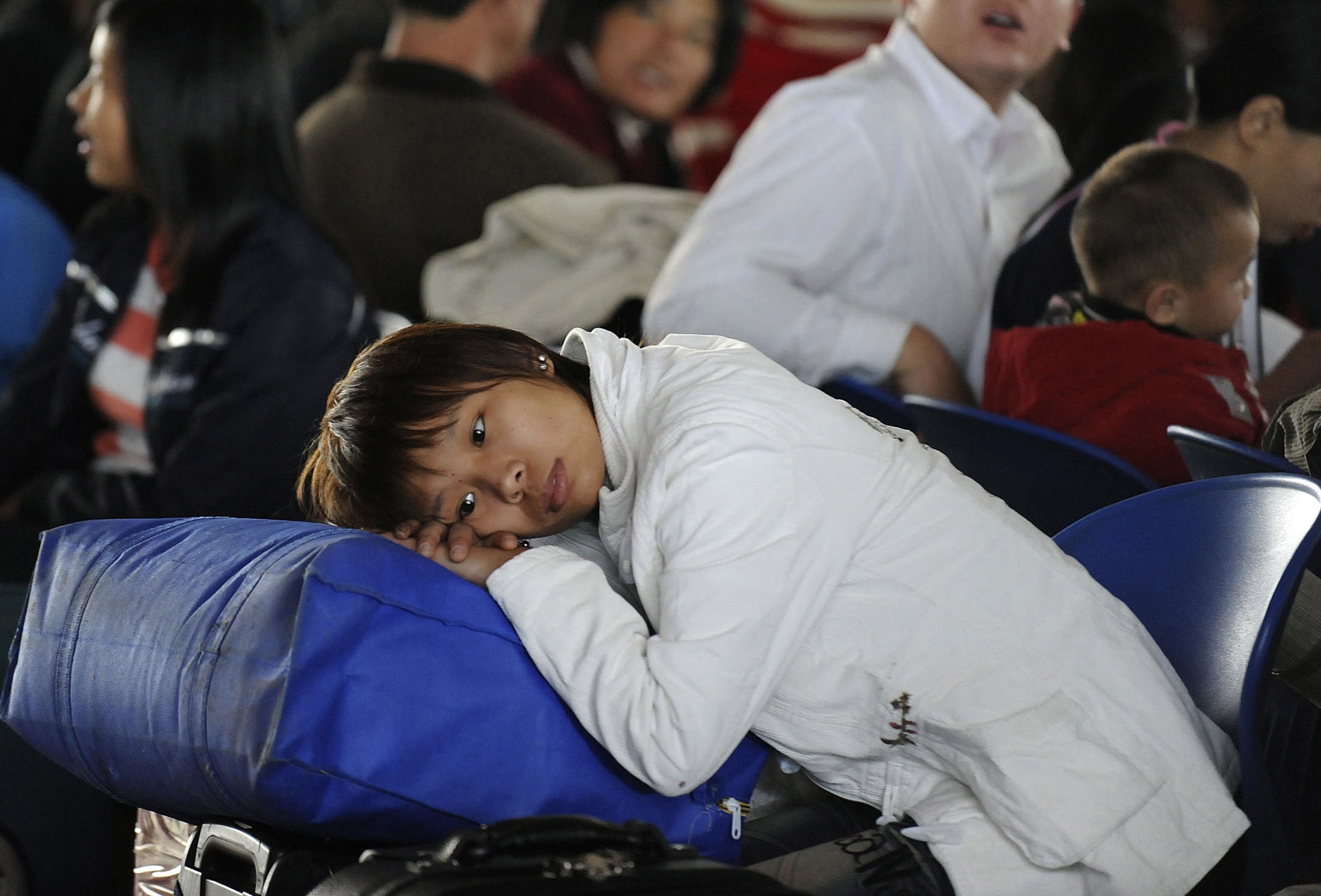 The biggest migration in human history has gone into reverse.
China's ocean of blue-collar workers is streaming back to the country's farming hinterland, bringing thwarted aspirations and rising discontent in tow as their city jobs, their paths out of poverty, fall victim to the global economic crisis.
Train K192 is a daily conduit of the reversing flow.
Every afternoon it pulls into Chengdu, capital of populous Sichuan province, after a 31-hour trip from Guangzhou, center of China's once-thriving export heartland.
Hundreds of weary passengers, some of whom stand through the entire journey because seats are sold out, straggle into the gray light of the Chengdu winter and an uncertain future.
"Lots of factories have closed. Mine shut about three months ago. There was nothing to do, so I came home," said Wu Hao, 21, sporting a stylish striped sweater and a sleek metal suitcase.
After a year spent making circuit boards in Guangzhou, he was heading back to his family's patch of farmland, a full month before the Chinese new year when he would usually visit home.
Officials estimate that more than 10 million migrant laborers have already returned to the countryside as thousands of companies have been dragged under by weak global demand for everything from clothes to cars. The government, always concerned about social instability, is now on high alert, fearful of the consequences of a huge mass of jobless, disappointed, rootless young men.
Beijing has urged firms to avoid cutting jobs despite falling profits, and many bosses have obliged by retaining workers but giving them unpaid leave.
"Sales were really bad and the boss just kept giving us holidays. We had 15 days off last month," said Tan Jun, who also clambered off train K192 in Chengdu. "Next year I won't go back."
With an impish smile, Tan looked more like a student than the factory hand he had been for a drug company in Dongguan, an industrial city next to Guangzhou.
偪enace to stability'
Over the past three decades, about 130 million people have left China's countryside for the smokestacks, assembly lines and construction sites of cities.
That migration, described as the world's biggest ever by the United Nations, has underpinned the country's heady growth and also given its poorest citizens a share of the spoils, as urban residents' incomes are much higher than farmers'.
Known as China's "floating population," laborers rarely settle permanently where they work - effectively prohibited from doing so by residency rules - and return in droves to their hometowns for the Chinese lunar new year.
State media have put the best possible gloss on the in-bound tide of migrants under way: they are simply returning home early, one month ahead of the Year of the Ox which begins on Jan. 26.
But China is heading into uncharted territory and the picture could deteriorate quickly. Many economists forecast growth next year of less than 7.5 percent, the country's lowest since 1990 and a level that would swell the ranks of the jobless.
"The redistribution of wealth through theft and robbery could dramatically increase and menaces to social stability will grow," Zhou Tianyong, a leading Communist Party scholar, wrote this month in a newspaper issued by a state think-tank.
Workers and officials alike hope the migration reversal is only temporary, but the numbers are too vast to ignore. The social security ministry says 10 percent of all migrants have already gone back to the countryside.
China, in the short term at least, is pinning its hopes on a smooth absorption of the returnees.
"We expect that there will be a big change early next year, probably in March or April," said Wang Min, a director at the Yuhui Labor Market in Chengdu. "A lot of people will stay here in Sichuan to look for work and not go to other provinces."
If so, they could be redrawing China's economic map.
Coastal provinces have long been the wealthiest in China and the main destination for migrants. But they have borne the brunt of falling exports, while the country's poorer hinterland is more closely tied to domestic fortunes that could rise on the back of a hefty government stimulus spending.
"We are seeing quite a few good, talented people come our way from Guangdong, people with business experience and skills," said Wei Chengyi, manager at Chengdu Doulton Trading Co., which sells ceramic filters. "It's a big help for us."
Unveiling its rural policy priorities for next year, the government said on Sunday that it will encourage unemployed people who return home to start their own businesses. Officials in Chongqing and Henan, two big sources of migrants, have already pledged to lend seed money.
Reconstruction after the devastating earthquake centered on Sichuan this year has also created a huge need for labor that will sop up some of the floating population.
"I'm not worried. There are still places you can find a job. And when you've got a lot of friends, it's quite easy," said Long Zhaojun, who had spent four years in coastal factories.
Just off the train in Chengdu, Long said he would stay in the bustling city of 10 million for a while to hunt for jobs and have some fun. He was in no rush to return to his farming village.