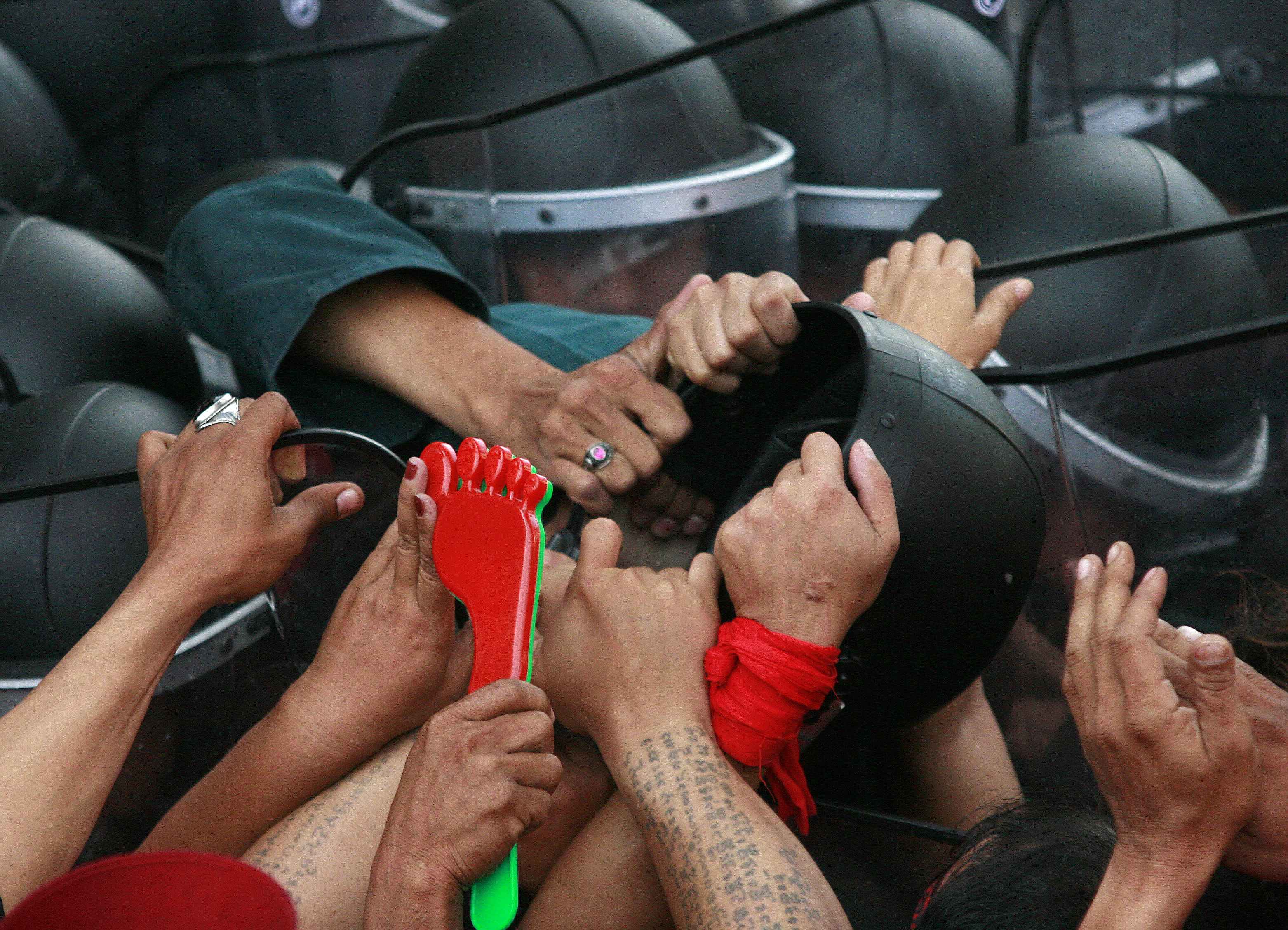 Thailand's new prime minister Abhisit Vejjajiva gave his inaugural policy speech yesterday, but only after protesters blockaded parliament for a second day and forced him to switch the venue.
The British-born leader, who was elected in a parliamentary vote about two weeks ago, instead addressed lawmakers at the foreign ministry as supporters of ousted former premier Thaksin Shinawatra showed no sign of budging.
Hundreds of riot police armed with shields made repeated efforts to create a path for MPs to enter parliament but more than 2,000 red-shirted demonstrators calling for new elections refused to back down.
"My government will restore normalcy to the country and make Thailand victorious," the 44-year-old Abhisit said in his speech, which was shown live on national television.
Abhisit said he wanted to heal Thailand's economic, social and political wounds after months of protests against the previous pro-Thaksin government, including the crippling occupation of Bangkok's airports earlier this month.
"The urgent measures in the first year are restoring confidence and stimulating the economy," he added.
The opposition boycotted the speech, while about 1,000 flag-waving demonstrators moved from parliament to block the gates of the foreign ministry to stop lawmakers from leaving, before organizers called them off.
"We are going back to parliament to plot out decisive action. This government lacks legitimacy and is unconstitutional," core organizer Suporn Atthawong told the crowd at the ministry.
Loyalists of Thaksin, who was ousted in a 2006 coup, say Abhisit's government is not legitimate as he came to power after the Thaksin-linked former ruling party was dissolved by a court this month in a vote fraud case.
The election of the Oxford-educated Abhisit ended six months of increasingly disruptive protests by anti-Thaksin group the People's Alliance for Democracy (PAD), which peaked with the airport blockade.
The yellow-clad PAD said the ruling People Power Party (PPP) was simply a puppet for twice-elected Thaksin, who lives abroad to avoid being jailed on a corruption conviction.
The week-long closure of the airports in November and early December caused massive economic damage and hurt the country's vital tourism industry.
Under the constitution, a new prime minister must give a speech outlining policy before his government can start work, and Abhisit said he would try to win back tourists put off by the airport chaos, which drew worldwide attention.
"The government will restore the confidence of foreign tourists and speed measures to stimulate tourism and investment," he said, as well as promising stimulus measures for exports, agriculture and industry.
Abhisit's own foreign minister played a leading role in the airport blockade, further angering Thaksin supporters and causing concern in diplomatic circles.
Thailand remains deeply divided between supporters of Thaksin and elements of the old power cliques in the military, palace and bureaucracy who felt threatened by his immense popularity with the rural poor.
Supporters of Thaksin said the dissolution of the PPP on Dec. 2 was a "disguised coup" and want parliament dissolved. Elections are not due until 2011.