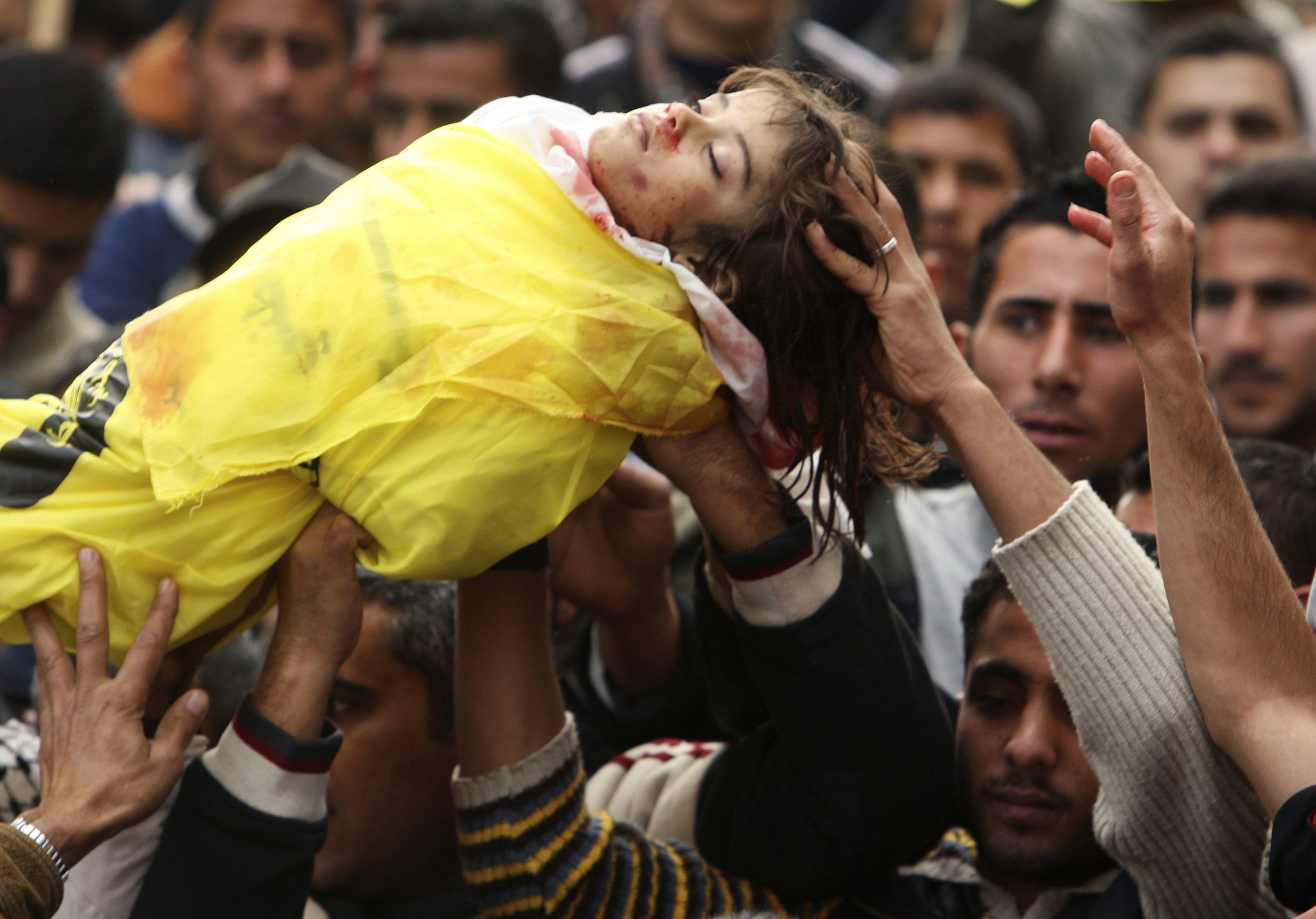 Israel shunned world appeals for a truce yesterday, massed forces on the Gaza border and warned that its deadly assault on Hamas could last for weeks as jets pummelled Islamist targets for a fourth day.
Despite the devastating aerial pounding that has killed at least 363 Palestinians, Hamas militants continued to fight back, firing deadly rockets deep inside Israel.
Children again fell victim to the Jewish state's "all-out war" on the Islamist Hamas movement, with two sisters dying when a missile slammed into their donkey cart in the northern Gaza town of Beit Hanun.
In Gaza City, residents picked through rubble and broken glass after a night which saw Israel hammering the overcrowded territory with some 40 strikes targeting Hamas buildings, training camps and rocket launching sites.
"We are scared... that we can die at any moment," said 11-year-old Mohammed Ayyad who lives near a government compound blasted in the overnight raids.
Despite pleas by U.N. chief Ban Ki-moon for a stop to the "unacceptable" violence that has sparked outrage in the Muslim world and protests in many countries, Israel waved aside calls for a truce.
"There is no reason that we would accept a ceasefire at this stage," Infrastructure Minister Benjamin Ben-Eliezer said.
"If there is a cease fire, that will allow Hamas to regain strength, recover from the shock and prepare an even stronger attack against Israel."
With tanks and troops massed on the Gaza border, the Israeli military said "ground forces are ready" to join what politicians have warned would be a prolonged offensive.
Prime Minister Ehud Olmert said the bombardment so far was "the first of several stages approved by the security cabinet."
Deputy defense Minister Matan Vilnai warned the offensive - one of Israel's deadliest against Gaza - could turn into "weeks of combat."
Defense Minister Ehud Barak has said the "all-out war" against Hamas "will be intensified as necessary" to "deal a severe blow to Hamas so that it stops firing against Israeli citizens and soldiers."
The four days of intensive bombardment, which have killed several senior Hamas officials and reduced much of its infrastructure in Gaza to rubble, have failed to stop rocket fire from the territory.
Three Israelis - two civilians and one soldier - were killed on Monday by rockets fired from Gaza, with one slamming into the southern port city of Ashdod more than 30km from the border.
Hamas has warned it could launch suicide attacks inside Israel for the first time since January 2005.
Since the massive aerial attack was unleashed on Saturday in a bid to halt persistent rocket fire from Gaza, at least 363 Palestinians, including 39 children, have been killed and 1,720 wounded, Gaza medics say.
Palestinian militants have also fired more than 250 rockets, killing four people inside Israel and wounding around two dozen more.
Rebuffing Arab appeals, Israel's main ally Washington gave the offensive strong support but said it was also working behind the scenes to forge a truce.
"The United States understands that Israel needs to take actions to defend itself," White House spokesman Gordon Johndroe said.
Secretary of State Condoleezza Rice was speaking to key world leaders and diplomats to find a lasting way to end the violence, officials said.
At the United Nations, Ban said he was "deeply alarmed" by the "unacceptable" escalation of violence. "Both Israel and Hamas must halt their acts of violence and... a cease fire must be declared immediately," he said.
EU foreign ministers were set to meet in Paris later on Tuesday to discuss how they can work to help ease the crisis in Gaza.
In Brussels, the European Union's executive arm sounded the alarm about the "plight of civilians" in the battered territory, and called "for an immediate halt to military hostilities... (and) to the rocket attacks."
Concern is growing about the humanitarian situation in the aid-dependent enclave of 1.5 million which Israel has virtually sealed off since Hamas seized power in June last year.
The Israeli military opened the Kerem Shalom crossing to allow more than 100 trucks filled with humanitarian aid to enter Gaza yesterday, a military spokesman said. On Monday, dozens of trucks were allowed to pass through.