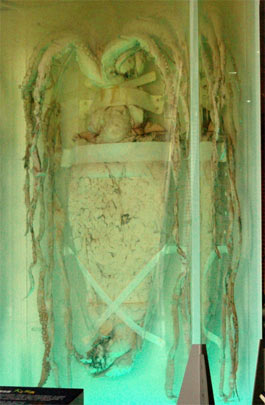 Tales of giant squid have been common among mariners since ancient times. Some of these legends were exaggerated but these monsters from the deep do exist. Yet, very little is known about the giant squid. We don’t know how they live, what they eat or how they find a mate. Even the taxonomy of the giant squid has not been entirely resolved.

This giant squid Architeuthis sanctipauli displayed at the Museum is a member of the mollusk phylum, and belong to a group called the Cephalopoda, meaning “head-footed”. It is 8.84 meters long and was caught off the coast of New Zealand by the New Zealand National Institute of Water & Atmospheric Research and donated to the Museum in 1999.

A team led by Museum invertebrate curator Shih-min Chao decided how best to preserve and display this rarely seen monstrous giant squid. They decided to present it in a “standing” pose so that the sharp ring-shaped teeth in its suckers and its outlet for shooting water out can be clearly seen. After a series of work of defrosting, cleaning, measuring and fixing, they succeeded making a resting place for the squid -- a specially made acrylic tank filled with solution of formalin as a preservative. Visitors can view the giant squid from three sides.

The giant squid Architeuthis sanctipauli live in the inky ocean off the coast of Australia, New Zealand or South Africa at depths of between 500 to 1000 meters, and can grow to a tremendous size: recent estimates put the maximum size at some 20 meters from caudal fin to the tip of the two long tentacles. Their well-developed eyes are the largest ones in the animal kingdom, and useful for spotting prey. Their eight arms and two extra long tentacles are equipped with hundreds of suckers to grab and drag prey. Their razor-sharp beak tears into prey such as other squid and fish. Squid remains found in sperm whales’ stomachs and nasty looking sucker scars on whale’s skin seem to prove they are born enemies. We can only imagine the underwater battles between these two amazing creatures.

Annually, the giant squid Architeuthis sanctipauli appears off the coast of New Zealand, Australia, or South Africa in between December and March to reproduce, and then disappears. They remain a great mystery for us to discover.

“Our giant squid specimen is not the largest one, that record belongs to an 18.8-meter specimen caught in Island Bay, New Zealand in 1880. However, it is the largest one in ‘standing’ pose. Take a picture with this ‘beautiful monster’ when you visit the Museum”, said Shih-min Chao.