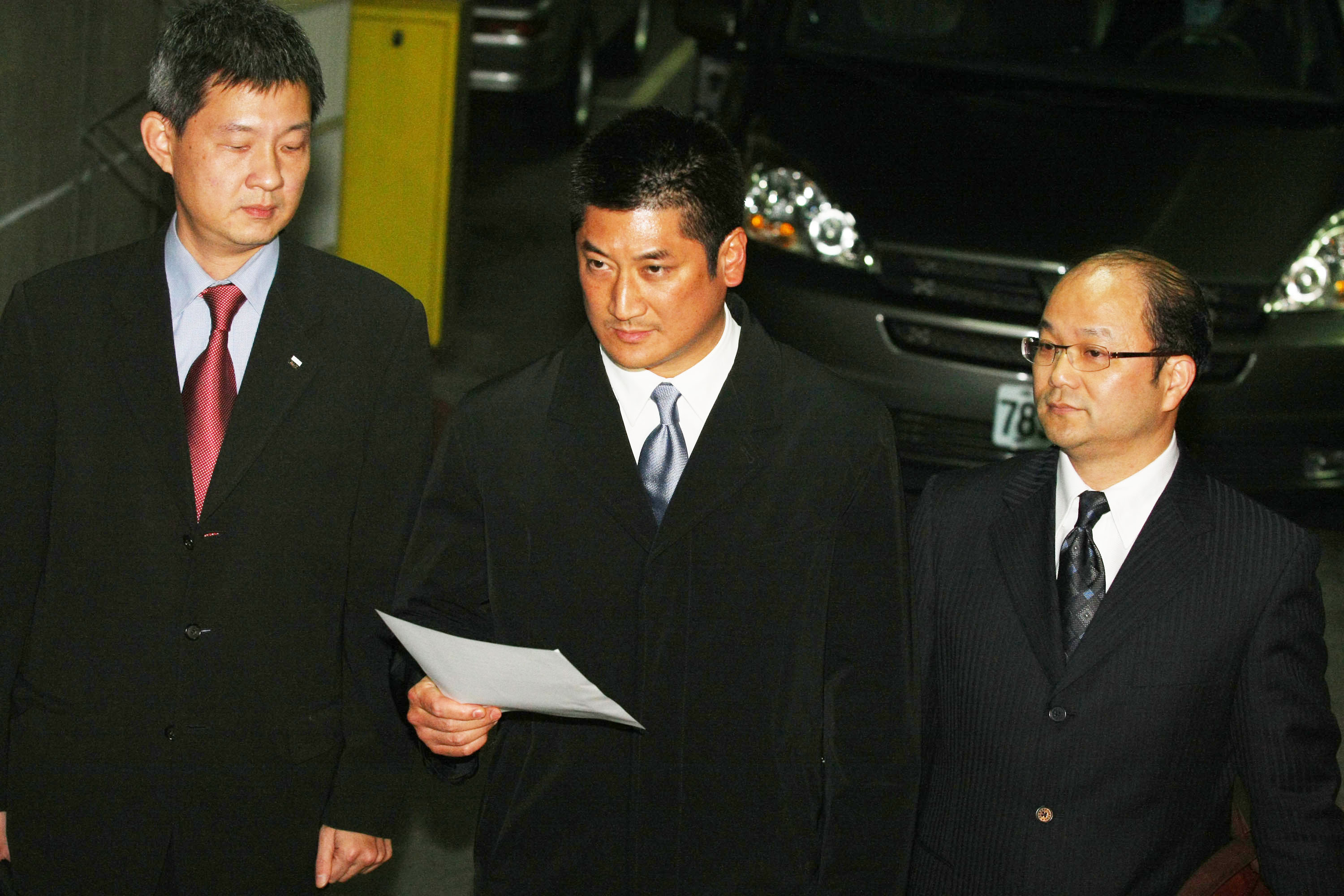 Former Chinatrust Financial Holding vice chairman Jeffrey Koo Jr. was released on bail of NT$100 million late Monday after 12 hours of questioning by prosecutors about his role in scandals related to detained former President Chen Shui-bian.
Koo arrived back in Taiwan Monday morning after two years he spent in Japan to avoid detention over other unrelated financial scandals he stands accused of.
The prominent banker was taken to the Supreme Prosecutors Office's Special Investigation Division in downtown Taipei immediately after his arrival and was questioned until late in the evening.
After the questioning, he read a short statement to the media expressing his apology to Chinatrust employees and shareholders for the Red Fire scandal. The banker fled to Japan during an investigation about the use of equity-linked structured notes by Chinatrust's Hong Kong branch to invest in partly state-run Mega Financial Holding. The notes were later transferred to Hong Kong-based Red Fire Development Ltd., widely believed to be a front for the Koo family.
Media reports speculated yesterday that Red Fire wired US$10 million (NT$330 million) to Japan, which might have ended up in accounts linked to the former first family.
"By returning to Taiwan, I hope that apart from directly facing the judicial investigation, I can also clear up past cases and reduce the influence of the case on Chinatrust Financial to the smallest possible level," Koo said in front of the division's office Monday night.
In contrast to other suspects in the former president's scandals, Koo was not barred from leaving the country. "Considering he voluntarily returned to Taiwan to face interrogation, there is no need to detain him," prosecutors' spokesman Chen Yun-nan told reporters after Koo's release.
The financier has to notify prosecutors of any overseas travel plans, and tell them the precise reasons and dates for eventual trips, reports said. Koo's wife is reportedly undergoing medical treatment in the United States, while their children lived with him in Japan.
Koo's bail was the fourth highest in Taiwan judicial history. The record went to media tycoon Gary Wang, who had to pay NT$350 million for his release.
Koo is a defendant in five scandals, but he was appearing as a witness in the case of a land deal in Lungtan, Taoyuan County.
The prominent businessman reportedly played the role of go-between in the transfer of NT$400 million from a relative, Taiwan Cement Corp. chairman Leslie Koo, to Tsai Ming-cheh, a friend of former First Lady Wu Shu-jen.
Media have reported that Wu might have accepted some of the money as a commission for facilitating the land deal. An investment company owned by the Koos needed to find a buyer for its land in order to solve its financial problems.
The former Chinatrust vice chairman reportedly also gave NT$100 million as a political donation to Chen's Democratic Progressive Party, but the money ended up in the former First Family's private bank accounts, media reported.
Koo's decision to return to Taiwan reportedly came after a trip to Japan by a member of the Special Investigation Division, even though the prosecutors denied they had made a deal with the banker.
His father, Chinatrust chairman Jeffrey Koo Sr., returned to Taiwan yesterday after cutting short his trip to Peru with the country's delegation to the APEC annual meeting.
Upon his arrival at Taiwan Taoyuan International Airport, Koo said he had not phoned his son yet. The elder Koo has always denied allegations that his family made payments to Chen's family in return for the permission to take stakes in state-run financial institutions.
Lawmakers from both sides of the political spectrum said prosecutors treated the younger Koo too leniently. The DPP contrasted the banker's speedy release with the decision to take the former president into custody on Nov. 12.
Chen has been on a hunger strike since his detention, spent three days in hospital for treatment, and was questioned once by prosecutors at the Taipei Detention Center in Tucheng, Taipei County.
In the latest stage of the investigation, prosecutors summoned Wu Ching-mao, the brother of the former First Lady, from prison to face questioning yesterday. His wife was also asked to appear, and left after six hours.