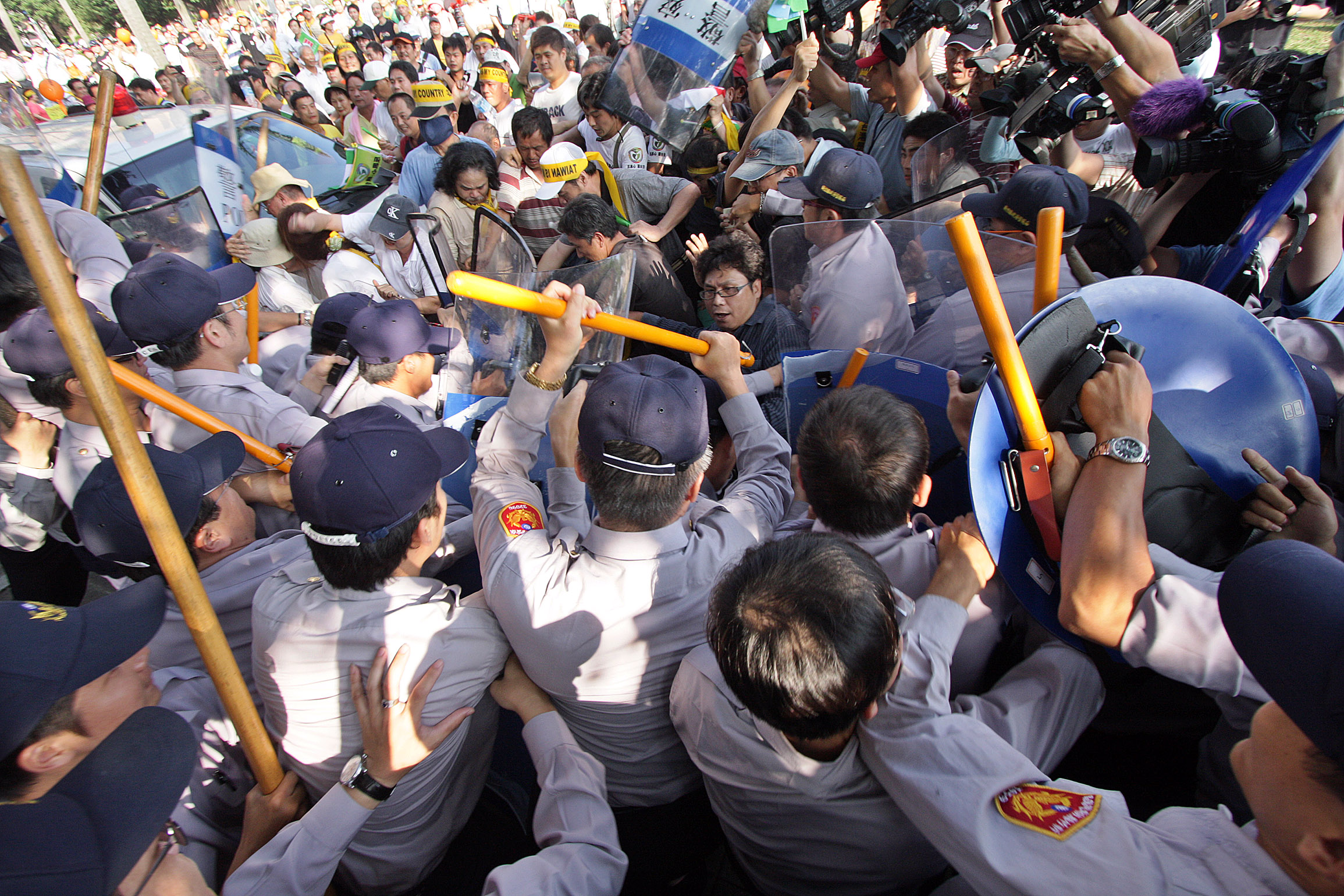 The series of "investigative detentions" of opposition Democratic Progressive Party leaders including DPP Chiayi County Mayor Chen Ming-wen and DPP Yunlin County Mayor Su Chih-fen to former president Chen Shui-bian and abuse of security and police last week's visit to Taiwan by People's Republic of China envoy Chen Yunlin displayed the contempt of the restored Chinese Nationalist Party (Kuomintang) for judicial, civic and other basic human rights.
In less than six months after President Ma Ying-jeou took office May 20, abuse of public authority and infringement on judicial and basic human and civic rights by prosecutors and investigators to judges and national and local police has reached a shocking degree.
As if to salvage Ma's plunging approval ratings and deflect public attention away from KMT incompetence, prosecutors have intensified the pace of high profile investigations into alleged corruption scandals that seem to only involve former or current DPP government officials.
Faced with an openly acknowledged shortage of concrete evidence, the Special Investigation Division prosecutors have resorted to the abuse of controversial techniques such as placing unindicted "suspects" under "investigative preventative detention" for up to four months for the transparent purpose of fishing for evidence, extracting confessions or pressuring suspects to turn state witness.
Moreover, in the case of the varied cases against the former president, Special Investigation Division prosecutors have clearly continued to leak "incriminating" material about relations with foreign countries to friendly news media without apparent regard for the impact on our diplomacy or national security.
Now under detention and banned from communicating with the outside world, Chen and his colleagues cannot defend their reputations or innocence against "trial by media."
The degree to which prosecutors have regressed was shown by a Yunlin district prosecutor who criticized Su Chih-fen for protesting her (illegal) detention by launching a hunger strike and declared that the DPP mayor should "present evidence to prove her innocence in court," a statement that directly contradicted the fundamental legal principle that places the burden of proof on prosecutors, not defendants.
Moreover, Taiwan citizens last week witnessed in personal experience or viewed live news broadcasts of the widespread aspect of the human rights rollback in terms of restrictions on the freedoms of assembly and free speech imposed arbitrarily during Chen Yunlin's visit.
Conflicts between law enforcement agencies and protesting citizens occur in all democratic countries, but the confrontations between police and pro-Taiwan demonstrators on the streets of Taipei last week were particularly serious because they were sparked by and directly entailed the use of state violence by the KMT to protect an envoy from a hostile and authoritarian country from protests by our own citizens.
The massive degree of security and police "protection" for the PRC envoy displayed during the first three days after his arrival November 3 far exceeded anything ever before seen in Taiwan and entailed severe restrictions on freedom of expression and movement of many ordinary citizens and a virtually complete blanket on any legal protests.
Moreover, police tore protest banners and even Republic of China flags out of the hands of ordinary citizens, improperly and rudely demanded citizens to identify themselves and illegally took citizens who refused to nearby police stations for detention, stormed into a record store near the Ambassador Hotel, where Chen was having dinner with KMT leaders, without a warrant to shut off Taiwanese music, manhandled DPP legislators, randomly beat protesters, bystanders and reporters and forcibly removed students sit-in at the Cabinet to protest such human rights violations.
Baptized in democratic values?
Ironically, most voters cast ballots for Ma because they believed his promises to boost economic growth and easing cross-strait tensions and because they believed that, after eight years in opposition, the KMT had already been baptized in democratic values and that its authoritarian legacy had been washed away.
However, the events surrounding the visit by the People's Republic of China envoy have exposed the unfortunate reality that Taiwan's "democracy" was far from consolidated and that our citizens again face a restored KMT party state has turned the clock on our democracy and human rights back over a decade after less than six months in office.
Fortunately, various organizations and movements have already begun to mobilize to protect our hard-won human rights from further encroachment.
The reconvened "Wild Strawberry Student Movement" at Taipei's Liberty Square has intensified its campaign, together with the Taiwan Association for Human Rights and other organizations, to press for a revisions of the constrictive Assembly and Parade Law.
Moreover, the opposition Democratic Progressive, which regretfully neglected the importance of transitional justice and judicial reform during most of its eight years in office, resolved to both support the drive to revamp the assembly law and to launch a new "judicial human rights reform" movement.
We urge all citizens to set aside partisan differences to support these efforts and prevent a rollback of our hard-won human rights and democratic freedoms. After all, the next victim may be you.