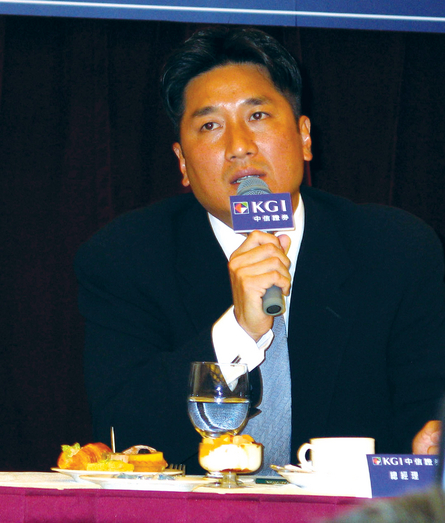 China Development Financial Holding president Angelo Koo returned to Taiwan yesterday amid expectations he will soon face questioning by prosecutors about former President Chen Shui-bian's (陳水扁) money-laundering scandal.
On Oct. 17, prosecutors raided the offices of financial holdings Yuanta, Chinatrust and China Development to investigate alleged unclear movements of funds between accounts held by the companies and accounts linked to the former First Family.
The weekend after the raids, prosecutors summoned key Yuanta officials Victor and Michael Ma for questioning. Last Friday it was the turn of Chinatrust chairman Jeffrey Koo, Sr., Angelo Koo's father, who cut short a business trip to China and the Philippines for the questioning.
The younger Koo was also on a separate business trip in the United States and asked for leave through his attorney. Angelo Koo arrived in Taiwan early yesterday morning after cutting short his overseas stay by one week, media reports said.
A prosecutors' spokesman said yesterday customs officials had notified them of the businessman's return, and he would receive a summons giving him a date for the questioning. Koo is likely to meet prosecutors before the end of the week, unconfirmed media reports said.
The investigation into alleged money laundering by the former president and his family began last Aug. 14, when Chen admitted his wife had wired US$21 million into foreign accounts registered under relatives' names.
He has maintained that the money consisted of leftovers from his election campaigns, and was meant to be used for charity and other work on behalf of Taiwan.
Since the raids on the financial holdings, media speculation has mounted that leading financial groups might have paid bribes to prominent officials in exchange for the government's approval to buy up other companies. Businessmen and officials named in the reports have denied the allegations.