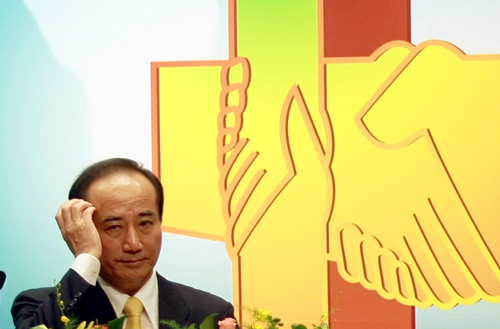 TAIPEI (Taiwan News) - Scenes of dissidents making their views plain to Taiwan's former or incumbent leaders are commonplaces in Taiwan society. But, the National Security Bureau (NSB) has now drafted a proposal on the "ordinance governing the special agents of the NSB" (特種勤務條例草案), and the draft bill has been sent to the legislature for review. If the bill is passed, then in future, participants in events held by the public to extend protest at national leaders, both incumbent and ex-leaders, such as the recent 1025 mass rally of "opposing toxic products, safeguarding Taiwan," may risk being hunt and clamped down by police for questioning, body search and seizure, and even a three-hour detention under the premise that participants in protests are clearly suspected of harming current or former national leaders.

The public slammed the NSB's draft plan, which is no different from the government's self-justification to avail itself of a loophole by tightening controls. Even worse, the bill may trample on human rights by suppressing dissents.

Some regard the draft plan is a step backward for Taiwan's democracy. If the bill is passed, then Taiwan will go back to the era during the Chiang Kai-shek's (蔣介石) Chinese Nationalist Party (KMT) regime, which retreated to Taiwan and established the so-called a "settler state". The idea of a settler state was not as important as the fact that Taiwan was to undergo thirty to forty years of "white terror" through the imposition of martial law and the mobilization of KMT forces to suppress rebellion.

An NSB official Chen Ping-lin (陳炳林) reassured the public that the NSB special agent would only use the new draft bill if passed under an extremely critical situation. In other words, the NSB will not use the new regulations to deter the public arbitrarily.