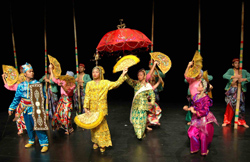 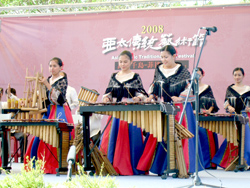 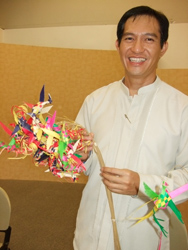 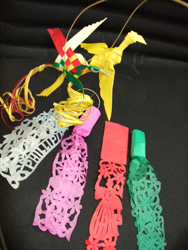 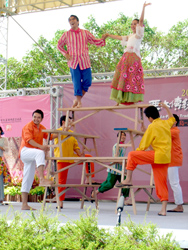 Bringing the Philippines' top traditional performing artists and craftsmen to Wujie Township in Yilan County to be the colorful main attractions during the 2008 Asia-Pacific Traditional Arts Festival has been quite a feat for the National Center for the Traditional Arts under the Council for Cultural Affairs. The cultural showcase has been mounted on a scale never seen before in Taiwan with the full support of the Manila Economic and Cultural Office.

Over a 10-day period until October 19, the talented entourage from the neighboring Southeast Asian country has been wowing visitors while doing their best to meaningfully open a window on Philippine art and culture.

The world-acclaimed Bayanihan National Folk Dance Company, whose history dates back to 1957, has been presenting a colorful song and dance repertoire, which shows the cultural influences of the colonizing powers in the history of the Philippines. Rather remarkable are suggestions of the Spanish legacy as seen, for example, in the dancers clicking castanets and stomping their feet. The beautiful costumes, too, take viewers back to the Spanish era, when women of the upper social class donned the long-sleeved and floor-length Maria Clara dress. The demure Maria Clara was the lead female character in Philippine national hero Jose Rizal's novel "Noli Me Tangere." Sometimes the elegantly-dressed performers move about mimicking the Philippine national bird, the maya.

As the country is known as the fiesta islands, celebrations never end. The ever-smiling members of the Bayanihan company do a light-hearted piece requiring a female dancer to leap with help from her male partner from one side to the opposite end of a "bangko" or bench, sometimes from one level to the next, all the time balancing on a pyramid of benches piled high for fun during a local fiesta.

The Philippine national dance called tinikling is also in the program. Two dancers bring together and hit two bamboo poles on the ground while another two performers step in and out of the clicking props in attempts to simulate the moves of the tikling birds in the rice fields.

Dances from the predominantly Muslim area of Mindanao are being introduced by the MSU-IIT Kalimulan Cultural Dance Troupe. The dancers from the Mindanao State University in the Maranao heartland wear the bright-colored and tubular-shaped malong, which they wrap around their bodies in different traditional ways when they do the dances of the Maranao minority and other Muslim ethnic groups in southern Philippines to the music played on the gong-chimes called the kulintang.

The Banda Kawayan composed of young musicians playing on bamboo instruments has made several successful visits to Taiwan. However, the rhythmic dancing musicians recruited from the Polytechnic University of the Philippines have not stopped capturing the hearts of the spectators with their upbeat repertoire.

The Pangsiw Artistic Group of the Madukayan Tribe has traveled from the remote Cordillera highland region of northern Luzon in the Philippines to treat crowds at the National Center for the Traditional Arts in Yilan with flat gangsa or gong ensemble and bamboo instrument ensemble performances. The typical male attire of this group is a g-string or a narrow loincloth supported by a waistband. The female look calls for the bright red fabric, a product of traditional handloom weaving bearing some similarities to what Taiwan's aboriginal tribes produce. This serves as a reminder that the aboriginal people from the Philippines like those from Taiwan belong to the same Austronesian group.

The Hudhud Traditional Music and Dance Troupe of the Ifugao Tribe is giving glimpses of the culture thriving on the rice terraces, already listed as World Heritage Site. The Hudhud, a traditional chant about the Ifugao heroes, their culture, lifestyle and values told in about 80 episodes, has been described as the Ifugao people's version of the Greeks' Iliad and the Indians' Mahabharata.

The demonstrations of traditional Philippine arts and crafts have been arousing the curiosity of visitors at the National Center for Traditional Arts. Alice C. Ocampo, who hails from San Miguel, Bulacan province, learned from her grandmother the cutting of colorful paper wrappers for the local pastillas, which are carabao milk-based sweets. The intricate designs of the red, white, green and yellow paper wrappers she attributed to her doting grandma.

Meanwhile Renato Deveza, the buri bird maker, described with pride his hometown of Lukban in Quezon province. The place is traditionally famous for buri hat-weaving. But Deveza is creative, coming up with the beautiful and decorative buri bird.

Lukban natives have an artistic flair and they try to upstage each other during the Pahiyas Festival in the month of May every year. On this occasion they transform the facades of their homes, decorating them with symbols of their sources of livelihoods such as farm produce. They also string together leaves made of rice paste and hang up the resulting chandeliers of sorts outside their windows and doors. Hordes of tourists flock to Lukban to see the town's incredible sight during the annual fiesta.

Rudel San Gaspar has been invited to give demonstrations in making ornamental wooden filigrees like necklaces, earrings, picture frames and furniture decorations. Julie Mantang for her part boasts expertise in the weaving of the tinalak fabric with intricate patterns of the T'boli tribe from Cotabato.

Traditional music instruments from the Philippines currently displayed at the National Center for Traditional Arts are an eye opener on how different music forms respond to particular religious beliefs and distributions in the archipelago of 7,100 islands. Christian musical form spreads mainly in the lowlands of Luzon and Visaya in the Philippine archipelago. Islamic music thrives in Mindanao, the Sulu archipelago and the south of Palawan. Austronesian music derived from primitive religions continues to be preserved in Luzon, Mindanao and in the mountains of the north of Palawan.

Plan a trip of discovery about the Philippines. Visit the National Center for the Traditional Arts in Wujie Township, Yilan County.