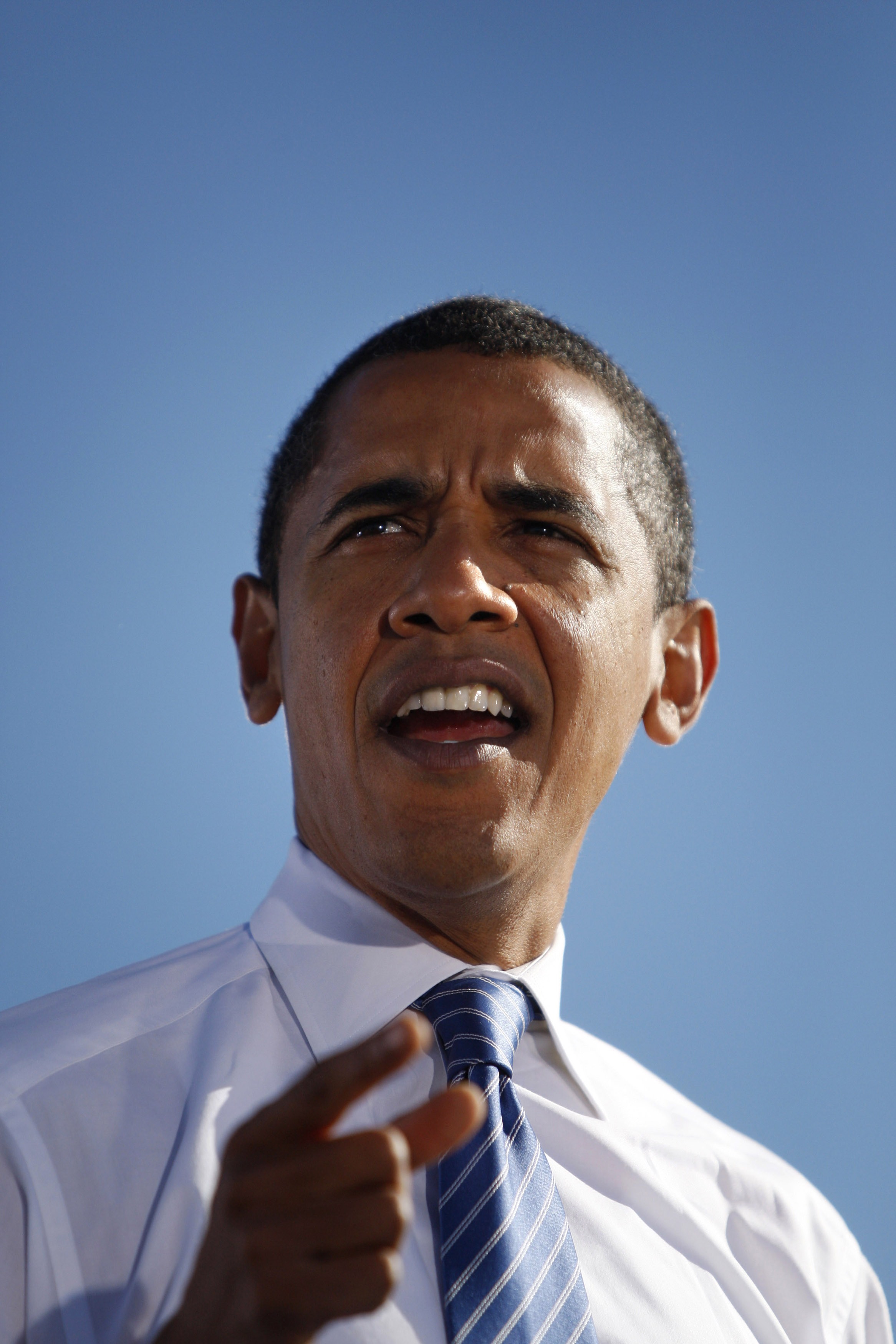 For Sen. Barack Obama, the way to cross the finish line first may be simply to stay on course and avoid game-changing mistakes. It doesn't hurt that the political landscape favors Democrats or that the Illinois senator has a huge cash advantage over rival Sen. John McCain.
Headed into the final week flush with cash, Obama has the lead in most national polls, is running ahead in states won by Democrat John Kerry in 2004 and is either leading or competitive in about a half-dozen states last won by President George W. Bush, including delegate-rich Florida and Ohio and onetime Republican stronghold Virginia.
The financial shocks of the past several weeks, an unpopular war and a president with sub-basement approval ratings should help Obama.
"I think he has to stay on message _ and not flub _ to keep on what seems to be a positive glide path," said Princeton political scientist Fred Greenstein, who has written several books on the presidency. "And no gloating. He should not sound like a latter-day Tom Dewey."
Republican Dewey was leading President Truman by about 5 percentage points in the final Gallup poll taken before the 1948 election, a margin similar to the one now enjoyed by Obama in some national polls. Dewey's self-confidence was misplaced. Truman won by about 10 points.
However, Gallup stopped polling about two weeks before the election and would have missed any last-minute changes in national sentiment.
Current polls, in fact, show that the race has tightened since the third and final debate.
But a close look at the electoral map and attention to where each candidate spends his remaining campaign days can be a telling indicator of the likely outcome.
Before traveling to Hawaii to visit his ailing grandmother, Obama stumped mostly in states that had gone for Bush in 2000 and 2004, including Florida, Virginia, Indiana and Missouri, where he was greeted by throngs. He planned more red-state campaigning in the final week.
McCain, meanwhile, is spending precious time trying to shore up his base in some of these same once-reliable Republican states. Obama's fundraising prowess is permitting him to continue to run ads nearly everywhere. His campaign has even bought a 30-minute political ad that will run on Wednesday night on major broadcast networks, making him the first presidential candidate to do so since billionaire Ross Perot in 1992.
Obama's endgame strategy is to keep the focus on the economy and hew to his longtime central campaign themes.
His themes are the need for change, linking McCain to failed Bush policies, and presenting himself as the candidate whose policies most favor middle-class Americans.
"Races tend to close at the end, and I think we're seeing this. But I don't think the underlying dynamic of the campaign has changed," said Doug Schoen, a Democratic strategist and pollster who worked for President Bill Clinton and New York Mayor Michael Bloomberg.
Still, Schoen said, "McCain certainly has a lot of fight left in him. And Obama would be making a mistake if he took his eye off the ball in states like Florida and Ohio and Colorado and Nevada that are tight."
He's not. In Colorado, which went Republican in both 2000 and 2004, Obama has a slight lead in some polls. The Democrats chose to have their nominating convention in Denver, and Obama has spent considerable time in the state.
"McCain is on the defense and he's trying to hold the states that Bush won and having trouble in about a half-dozen of these," said Thomas E. Cronin, a political science professor at Colorado College in Colorado Springs. "All Obama needs to do is to pick up four or so of these states. I think his chances are reasonably good in Colorado, although I think it's too close to call."
Cronin, who took some time out during the primary season to campaign for Obama, said the Illinois Democrat is much better-organized in Colorado than McCain, with more than three times as many campaign offices. In Virginia, which has been trending Democratic in recent statewide elections, Obama has also made a heavy push.
"No one who knows this state thinks he'll win it by 10 points, but certainly he has a lead of several points," said Larry Sabato, a political scientist at the University of Virginia in Charlottesville.
Obama's overflowing war chest will be a key factor in the final campaign push.
Since launching his campaign in early 2007 through September, Obama had taken in US$605 million. His fundraising will soon surpass the US$650 million total spent by President Bush and Democrat John Kerry combined in 2004.
The haul in contributions has enabled the Obama campaign to do "everything we wanted to do," says chief strategist David Axelrod.
Even McCain campaign manager Rick Davis calls Obama "the greatest fundraiser in presidential political history."
But Obama's decision to opt out of public financing _has come with a political price. It opened him to attacks from McCain, given that Obama initially suggested he would participate in the public-financing system. Furthermore, about half of his donations are under US$200 and do not have to be itemized and disclosed under Federal Election Commission rules. McCain's campaign lists all his donors, even those who give less than US$200, on his Web site.
For his part, Obama is not taking anything for granted. "We can't let up, and we won't let up," he said last week at a rally in Leesburg, Virginia.