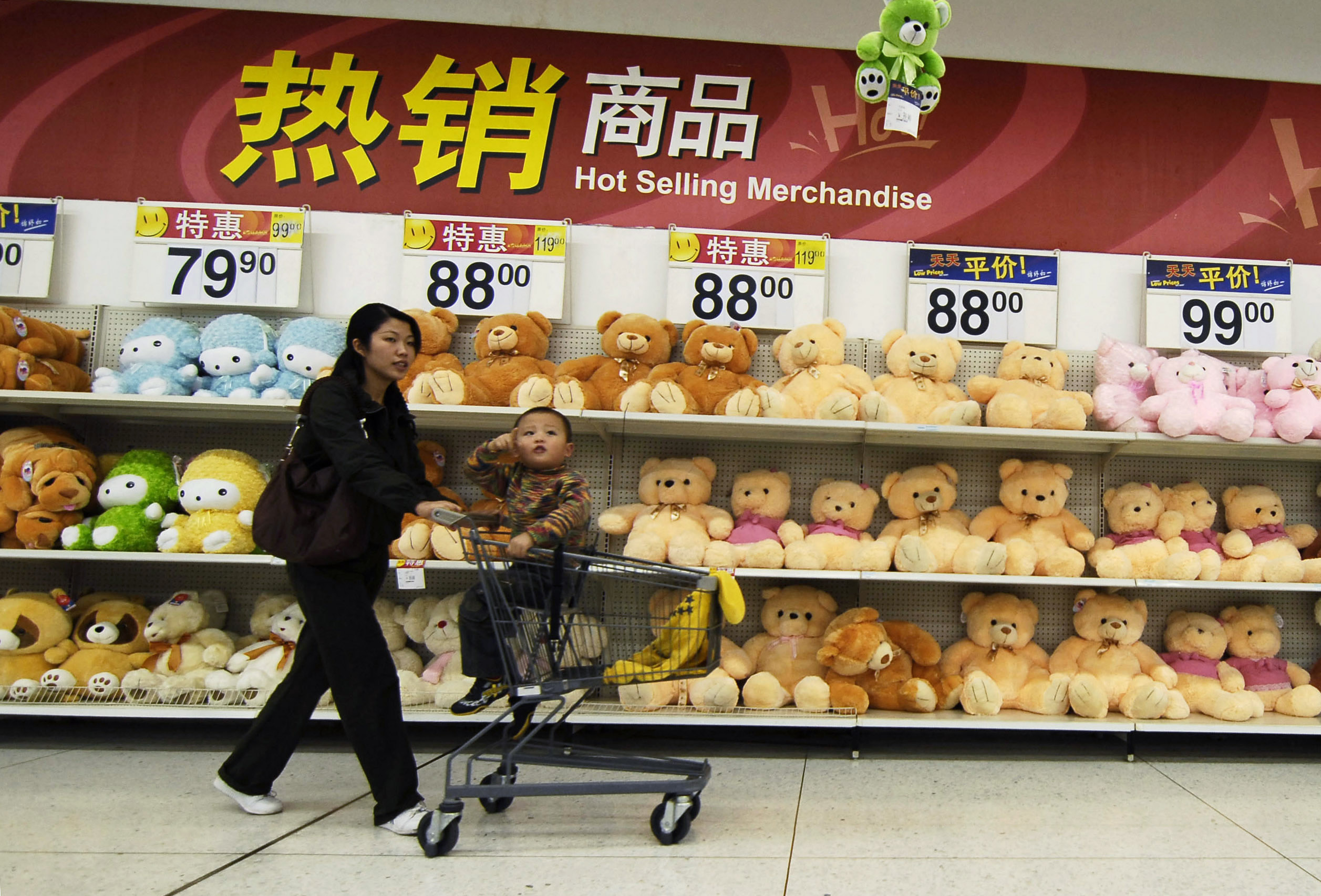 Sissi Liu's company specializes in novelty calculators and electronic games.
Yet even viewed from the brightest of her spacecraft or kitten-shaped designs, her numbers make for grim reading with Chinese exports facing a gloomy future.
"South America is our biggest market, but sales are down 30 percent there compared to this time last year," said Liu, whose firm Fullsun Electronics is based in the export hub of Ningbo, in northeastern Zhejiang province.
Sitting in her company's exhibition booth at the China Sourcing trade fair in Hong Kong, which ended Thursday, Liu says that it has been a bleak few days with little interest from potential buyers.
Clients are placing fewer orders and are asking for bigger discounts. "Christmas will be tough but I think 2009 is going to be very difficult," she said.
China's crucial export industry, which has fuelled much of the country's spectacular growth over the past two decades, is suffering from a global slowdown in demand.
Average year-on-year growth in the value of China's overseas orders has fallen from around 6.5 percent in 2007 to one percent in the second quarter of 2008, according to brokerage CLSA.
Toy and consumer electronic sectors are being hit hardest because they are not viewed as essential items.
"As many as half of all toy manufacturers in the Pearl River Delta could go out of business within the next two years," David Murphy, a China economist for CLSA, said in a research note.
The number of consumer goods firms based in the Pearl River Delta, a manufacturing center in the southern Guangdong province, has tumbled from 3,000 to 1,800 in the past nine months, CLSA said.
This has impacted on China's previously unstoppable economic growth, which slowed to 9.9 percent in the first three quarters of 2008, government figures showed.
By international standards, the growth is still strong, but this was the first single-digit posting since 2005 and testament to the pressure the export sector, particularly in the coastal manufacturing hubs, is under.
Surging raw material costs, wage inflation, tougher labour and health and safety laws, and an appreciating Chinese currency have all damaged the sector's competitiveness.
Booth after booth at the fair tells the same story.
Three years ago, Sweet Wu's fluffy pens and multi-coloured stationery enjoyed millions-strong sales.
Today, she said, Zhejiang-based Ningbo Sheng is shifting only thousands of units globally while labour and raw material costs are up 20 percent.
"Our factory employed 300 workers three years ago, now it's less than 100," she said.
Stereo maker Daklin Electronics, based in Hong Kong but with its manufacturing operations over the border, has cut factory staff by more than half in four years, and is selling 30 percent fewer units year-on-year.
"In previous downturns we'd sell to other countries if the United States wasn't doing well," said Yip Pui-ching, head of sales. "This time it is worse, everyone is in the same situation."
Safety concerns
Worries about safety of Chinese products and the growing trend of corporate social responsibility is also having an impact.
U.S. retail giant Wal-Mart this week told a gathering of its suppliers in Beijing that it would not do business with any supplier not meeting strict environmental and social standards.
"Stricter rules mean that all 300 of our factory workers must now sign a contract, while quality checks are more frequent for goods that we sell to Wal-Mart, driving up manufacturing costs," said Stone Shi, general manager of Shenzhen Minsuo Import and Export Company, in Guangdong.
The company recently launched a new line of propeller-driven flying alarm clocks.
Yet not all manufacturers are feeling threatened, with some even seeing the downturn as an opportunity.
Shenzhen-based Kingdom Products recently launched a line of organic babywear made from material derived from soybeans and bamboo.
Director Charlie Kui is hoping to take advantage of increased suspicion about the safety of the "Made in China" label, after a string of product and food safety scandals in the past two years.
"But for a Chinese company to make more environmentally friendly and healthy products is a good thing," he said.
Kui admits that trade is slow in tough market conditions.
"But I am not worried because I believe in my product," he said. "Even though we have problems, China is still the factory of the world."