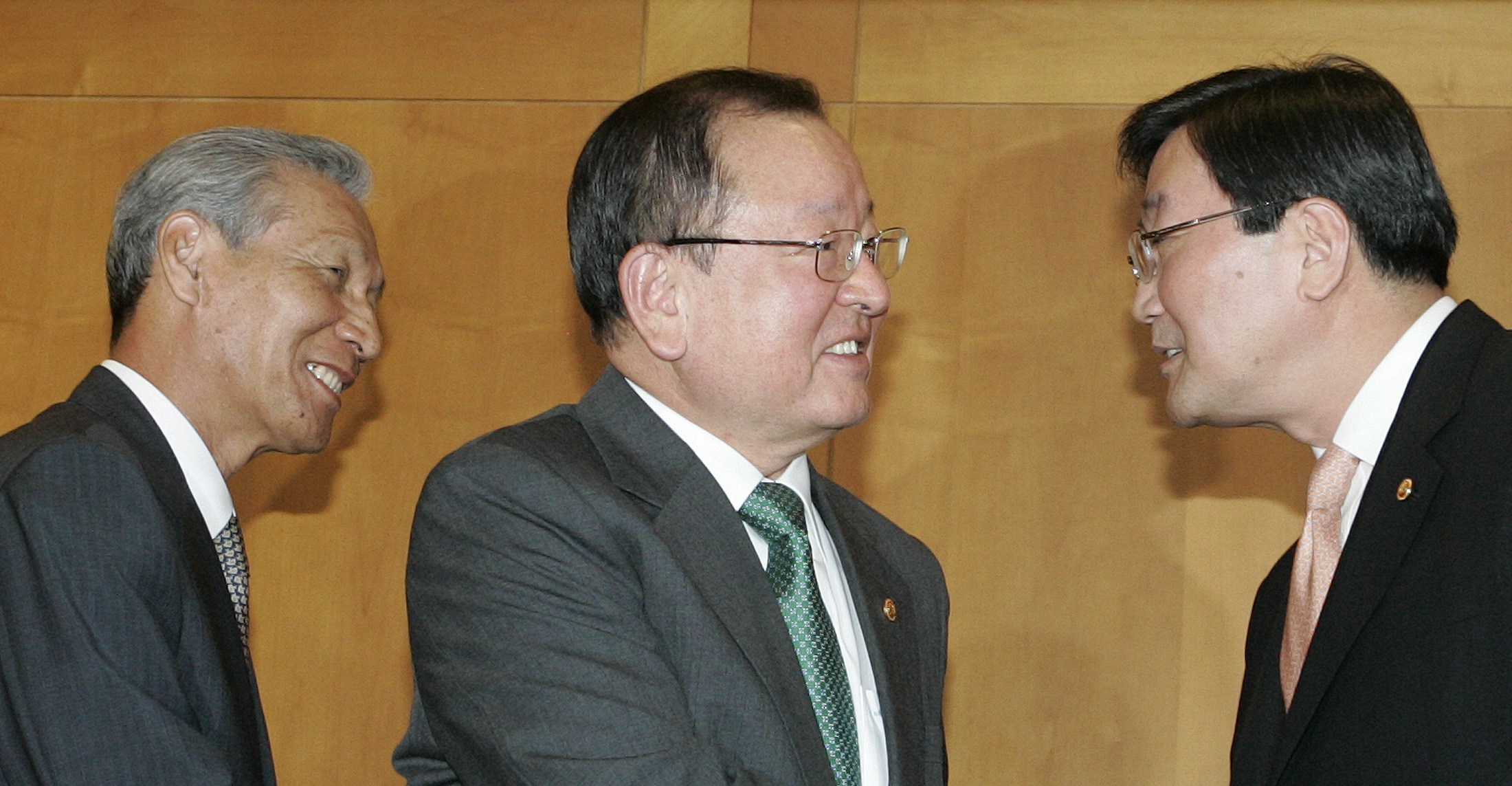 South Korea, its markets tumbling in the global financial storm, said yesterday it needed to take urgent action to prop up the economy with some analysts saying the central bank would cut interest rates today.
The call, after an emergency meeting of top economic officials with President Lee Myung-bak, follows last week's sharp plunge in shares prices and the won as fears grow that Asai's fourth largest economy is buckling under the strain of the global financial turmoil.
"(We) agreed on the need to stabilize market interest rates and to provide sufficient liquidity to avoid corporate bankruptcy," senior presidential economic policy aide Bahk Byoung-won told reporters.
The meeting included the fiance minister and the governor of the central bank.
Earlier, the central bank announced it would hold an unscheduled monetary policy meeting in the morning of Oct. 27 when a number of analysts said it would cut interest rates for the second time this month, possibly by as much as 50 basis points.
It has only once made an emergency rate cut since adopting its current rate-setting system in 1999 when it reduced rates by half a percentage point shortly after the Sept. 11, 2001 attacks in the United States.
The Bank of Korea joined a global rate cut earlier this month, reducing its main interest rate by 25 basis points to 5 percent and some analysts said today would see another cut.
No choice
"Given the panic to Friday in the financial markets, policymakers have no choice but to take measures to calm it," said Ryu Seung-sun, an economist with HMC Investment Securities.
"The Bank of Korea is expected to cut interest rates by 50 bps at the emergency meeting ... (It) is also likely to announce plan to buy banks' bonds."
But Park Sang-hyun, chief economist at HI Investment & Securities said a central bank move on bond purchases to ease liquidity problems was more likely than an interest rate cut.
Economic growth is at a four-year low and stocks on Friday ended their worst week on record on fears that a global recession will further pull down its export-dependent economy.
South Korean banks, scrambling to find anyone willing to lend them increasingly expensive dollars to pay off foreign currency loans, have looked particularly at risk from the impact of the global economic downturn and officials fear the squeeze threatens the wider economy.
"To lift the interest burden for small and medium enterprises and households, we will seek for necessary measures to cut market interest rates in cooperation with the Bank of Korea," Bahk said.
He said the country's foreign exchange liquidity problems - have almost been resolved, adding: "We can provide liquidity with foreign reserves."
South Korea's about US$240 billion in currency reserves are the world's sixth largest.
Next year's budget
He said it was inevitable the government would have to adjust next year's budget to help revive the economy. President Lee is scheduled to address parliament on the budget today.
But it will be difficult this time the economy to recover from the downturn as fast as it did after the 1997/98 Asian financial crisis.
In the crisis, the government relied heavily on international aid, led by the International Monetary Fund. But in a statement late last week, the finance ministry said it had no intention to apply to the IMF for short term-loans.