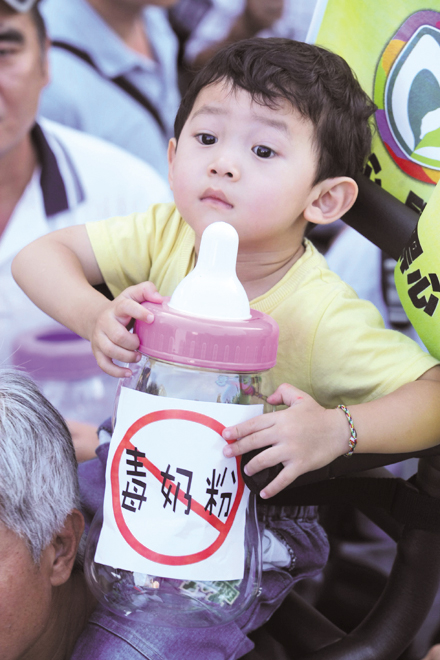 Democratic Progressive Party (DPP) Chairwoman Tsai Ing-wen (蔡英文) said that the biggest protest yesterday since Ma took office in May proved that the Taiwan consciousness is still in the hearts of Taiwanese people, and the DPP has the impetus to rehabilitate the party's reputation, which was tarnished by former president Chen Shui-bian's (陳水扁) allegedly money-laundering scandal as well as the DPP's defeat in the 2008 presidential election earlier this year.

Tsai said that the DPP has encountered many setbacks and challenges along the way, but it will not be beat down since every move the DPP makes is intended not only to make good for the political party, but also good for all Taiwanese people. Therefore, the DPP will hacks its way through difficulties and persistently pursue over the long-term goal of safeguarding Taiwan's sovereignty. Tsai thanked the DPP supporters for their willingness to stand with the party and make concerted efforts to break through brambles and thorns.

Tsai said that about 60,000 people from all walks of life took to the streets during the DPP's mass rally to safeguard Taiwan because they all share the same vision in terms of Taiwan consciousness, which has been blurred by the pro-China government. All protesters vented their anger at China's Association for Relations Across the Taiwan Strait (ARATS) Chairman Chen Yunlin (陳雲林). Chen Yunlin is scheduled to attend a second session of negotiations with Taiwan's counterpart Strait Exchange Foundation Chairman Chiang Pin-kun (江丙坤) in Taiwan on Nov. 3. Chen Yunlin's Taiwan visit "will unavoidably have negative impact on Taiwan's national sovereignty and people's welfare," and the DPP should "effectively meld a social consensus and draft an action program to uphold our national interest," said Tsai.

Democracy should not be a tool to legitimize the Chinese Nationalist Party's (KMT) one-party autocracy. Given today's government, which has failed to improve the nation's unemployment rate, revive national economy, and safeguard the health of the public and food safety, Taiwanese people cannot ignore the fact that social justice has been distorted under the Ma administration.

The mass demonstration against the Ma's soft and weak stance on China served as a major impetus keeping Taiwan consciousness intact in society. Tsai stressed that at this critical juncture of the fate of our nation, everyone should consolidate for the future of Taiwan. Tsai concluded that The DPP will forge its own road to ensure the well-being of all citizens and safeguard the nation's dignity.