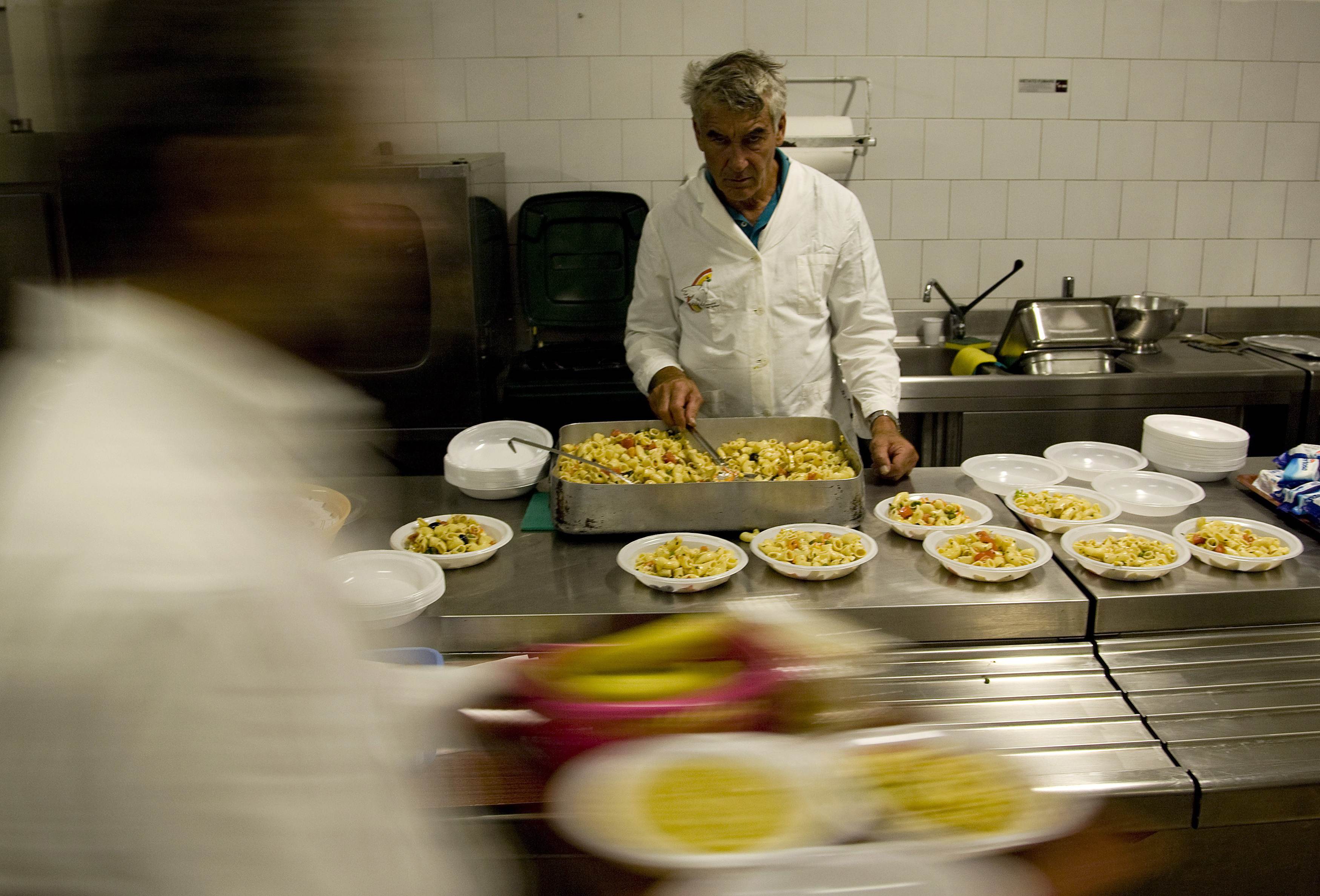 An empty plastic bag in hand, Italian shop assistant Stefano G. stands in line with hundreds of others waiting to collect handouts of basic foods he says he can no longer afford.
For the last seven months, the 43-year-old, who supports his pensioner parents and declined to give his full name because he did not want to be recognized, has been coming to the Pane Quotidiano (Daily Bread) charity in Milan to take home free bread, milk, fruit and vegetables and other produce.
Charities in Italy - where according to the World Bank Gross National Income was US$33,540 per head in 2007 - say a rising number of people are seeking their help.
Known as "the new poor," the first-timers line up to collect food or eat at soup kitchens, where charities say they still represent a minority compared with immigrants.
Italy was already on the brink of recession before double-digit price rises for staple foods and the latest spasms of the financial crisis. Stefano said he earns "a few hundred euros" a month.
"Things are getting worse and worse, it's a crisis. With prices rising, what can I do but this? I can't steal," he said.
Exactly how many people are joining the food queues is hard to say, but humanitarian groups say the trend is spreading as a slowdown and high prices push many on low incomes or without jobs into hardship.
"This is something that cannot be ignored and will probably rise further," said Marina Nava, of Milan charitable center Opera San Francesco, which offers free meals.
"These are people who have a home and up until a little while ago lived above the poverty threshold. But with things changing (they) quickly fall below," said Nava.
Officially 6.8 percent of Italians are unemployed: Roman Catholic charity Caritas says 13 percent of Italy's 58 million people are considered poor, living on less than 500-600 euros a month, or less than half the average salary.
In a report, it also highlighted the "nearly poor," those just above the poverty threshold by a marginal 10-50 euros a month.
"Among first-timers, a third are Italians," said Mario Marazziti of Rome's San Egidio church soup kitchen. "Slowly, the percentage of Italians (at San Egidio) is increasing."
The eurozone's third-largest economy has been one of its most sluggish performers for years, suffering more than most from high oil prices, a strong euro and the global slowdown.
Statistics show Italy is growing older and poorer while the economy underperforms its European peers.
Inflation is above the euro zone average, with shoppers still pinched by price hikes which producers say are unavoidable due to higher recent commodity and fuel prices. Pasta cost almost 25 percent more in September than a year ago and the price has not come back down, while bread was up 8.6 percent.
Last month, consumer groups staged a "bread strike," trying to persuade Italians not to buy bread for a day in protest.
The government has so far said it will stand as guarantor of last resort for bank deposits up to 103,000 euros, but has not taken specific steps to ease the strain on those on low incomes.
Prime Minister Silvio Berlusconi said on Monday Italy would "not take advantage" of market turmoil to dilute its long-term debt-reduction goals.
Francesco Marsico of Caritas said costly food and fuel put people at risk of sinking below the poverty line: "It doesn't take much for income not to be sufficient anymore. These families have trouble reaching the end of the month."
Banco Alimentare ("Food Bank"), which redistributes food to charities feeding the poor, says the number of Italians seeking help had been rising in the last two years but jumped lately.
"The river has been rising and rising, and this year it burst its banks," said Marco Lucchini, director-general of Banco Alimentare.
At Pane Quotidiano, which gives out the equivalent of 2,500 calories of food each to some 2,000 people a day, groups of all ages wait in line as volunteers distribute bread, packs of tiramisu, risotto, peaches and milk.
"In the last year, we've had an increase of over 30 percent in the number of visitors a day," said Ercole Polline, a counselor there. "About a year and a half ago, there were about 80 Italians who came every day, now there are about 350."
Maria Piacere, aged 62, is retired and lives on about 800 euros a month. She has been coming for food for a year.
"I have gas and electricity to pay, rent and fuel for the car," she said. "That leaves only a little for the rest."