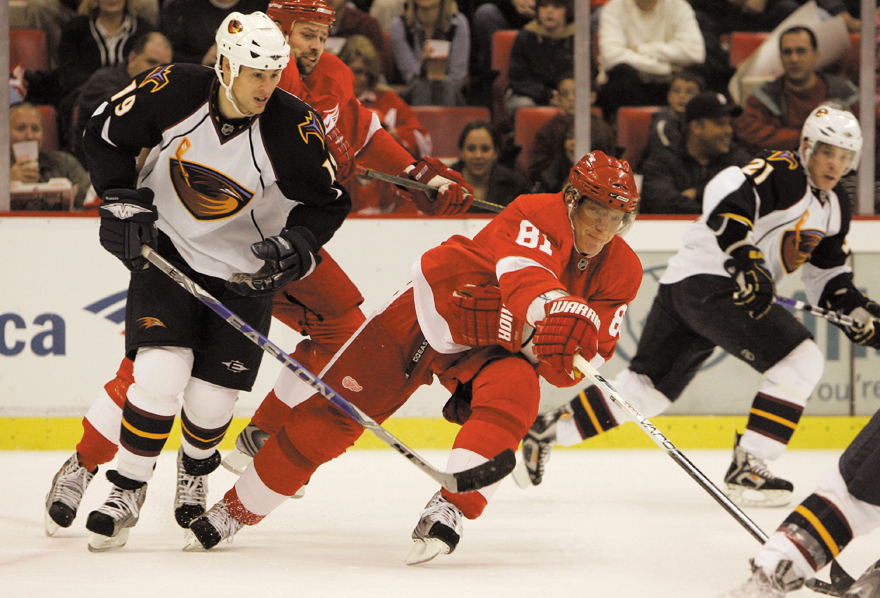 Marian Hossa and Henrik Zetterberg scored two goals each to help the Stanley Cup champion Detroit Red Wings beat the Atlanta Thrashers 5-3 on Friday.
Hossa, who was in a Thrashers uniform at the start of last season and the last player to score a hat-trick against the Red Wings at Joe Louis Arena, nearly had one against his former team but instead set up Dan Cleary with 36 seconds remaining rather than shoot for the empty net himself.
"Hossa was absolutely fantastic, he played with a little motivation today and obviously put on a show," Detroit coach Mike Babcock told reporters. "It's a big win for us, now we go on the road for a long time and we have to be prepared to get after it."
The Red Wings now begin a five-game road trip, having earned points from six of their opening seven games. The only regulation loss was to the Toronto Maple Leafs in their season opener.
Zetterberg opened the scoring with a power play goal just 2:12 into first period only to have Atlanta's Jim Slater cancel that out when he slammed home a loose puck.
Hossa restored Detroit's lead 67 seconds later on a dazzling individual effort, twisting his way around a Thrashers defender and lifting the puck over Kari Lehtonen to put his side 2-1 up.
Hossa and Zetterberg also scored goals in the second period to push Detroit ahead 4-1 before the Thrashers stormed back in the third with goals from Ron Hainsey and Brett Sterling.
With a minute left in regulation, Atlanta pulled Lehtonen in favor of the extra-attacker but could not complete the rally, Hossa dug the puck off the boards and slipped it to Cleary, who slotted the final goal.
"It's always great when the team you beat is a former-team, it's kind of bonus I had two goals which helps my confidence even more," said Hossa, who joined Detroit on a one-year US$7.4 million contract in the off season.
"It was an important win for us before the road trip and that is where we are going to measure ourselves."