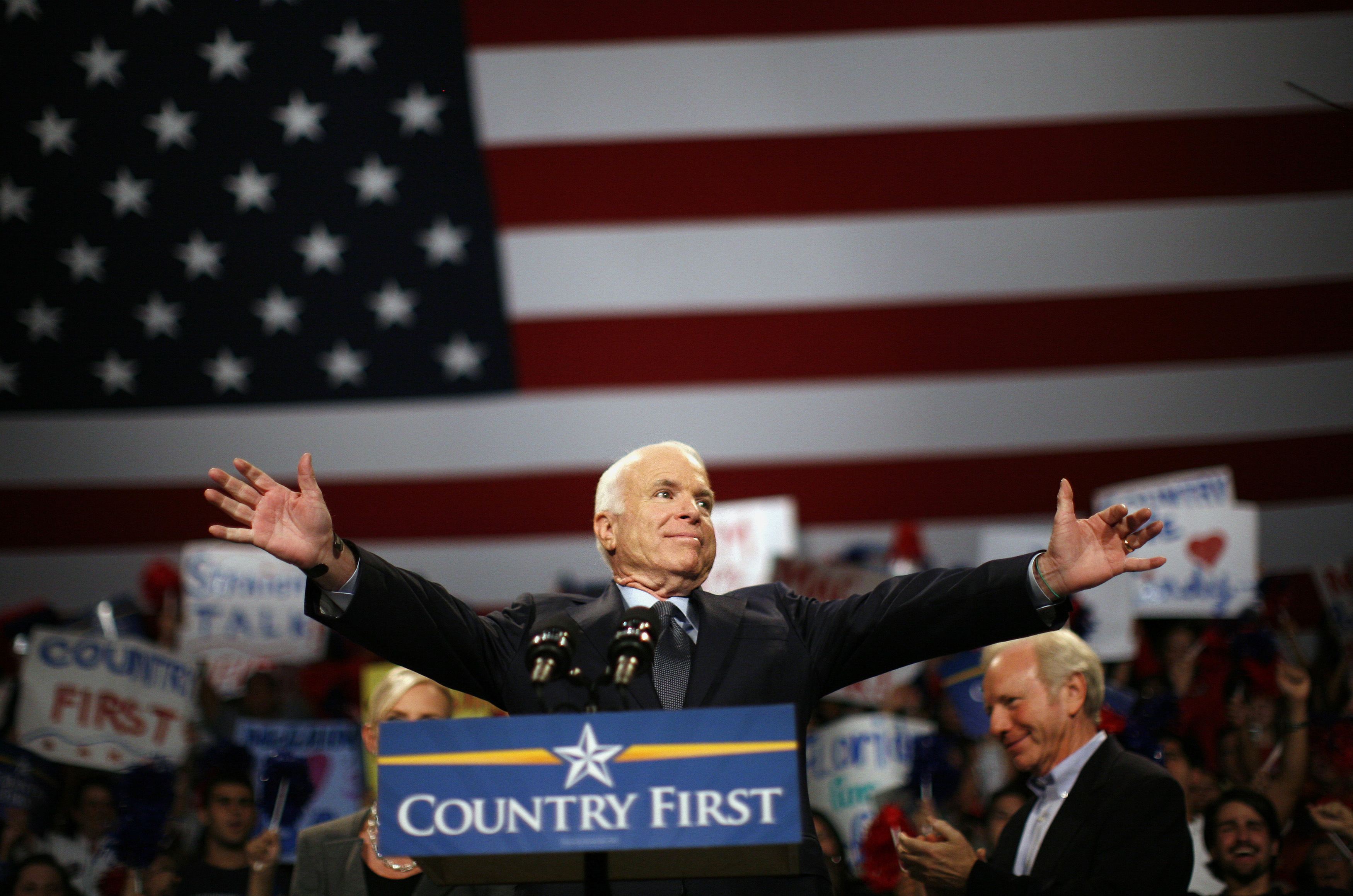 In an outbreak of class warfare, Republican John McCain Saturday likened Democrat Barack Obama to European socialists who advocate redistributing wealth as he tried to reverse his declining poll numbers.
With just over two weeks remaining to Election Day, the campaign heated up as Obama countered by accusing his rival of being "out of touch" with the struggles of middle-class Americans who need "a break."
The presidential candidates swapped sharply worded charges over tax cuts, each accusing the other of shortchanging middle-income Americans at a time of economic hardship for millions.
McCain has become increasingly aggressive in debates, personal appearances and _ in the past few days _ automated phone calls as the polls showed him falling behind nationally as well as in several key battleground states.
Obama attacks his rival heartily, and his rhetoric is backed by a late-campaign television advertising blitz that McCain has been unable to match.
Mounting problems
The candidates' itineraries underscored McCain's mounting problems holding on to states that traditionally have been safe for Republicans.
Obama spent the day in Missouri, a bellwether state that voted for President George W. Bush in 2004. Campaign aides, citing local police, estimated 100,000 people turned out to hear him at the Gateway Arch in St. Louis, on the banks of the Mississippi River.
Only once since 1904 has the Midwestern state failed to vote for the ultimate presidential election winner. The U.S. election is not a national ballot; it is won - or lost - on a state by state basis, with the most populous states holding the most electoral votes.
McCain leveled his most critical rhetoric of the day in a paid weekly radio address, and he campaigned later in North Carolina and Virginia, a pair of traditionally Republican states he is struggling to hold. Aides estimated his North Carolina crowd at 4,000 to 5,000, a number he matched later in the day during an outdoor appearance in Woodbridge, Virginia.
The senator took the stage there to the theme song of "Rocky," a movie about an underdog and comeback fighter - who loses his big fight in the final scene of the film.
The last Democratic candidate to win North Carolina was Southerner Jimmy Carter in 1976, when the Republicans were reeling from President Richard Nixon's resignation following the Watergate scandal. Virginia has not voted for a Democratic nominee since President Lyndon Johnson's landslide victory in 1964.
Both campaigns was expected to be closely watching what former Secretary of State Colin Powell has to say about his presidential choice. The retired four-star general was supposed to give an exclusive interview to NBC television's "Meet the Press" on yesterday.
An Obama endorsement by the widely respected Powell would represent a severe blow to McCain's chances for a comeback victory by undercutting the Republican's argument that Obama is a risky choice for commander-in-chief.
McCain fired the first volley Saturday, accusing his rival of wanting to "convert the IRS (Internal Revenue Service) into a giant welfare agency, redistributing massive amounts of wealth at the direction of politicians in Washington."
"At least in Europe, the socialist leaders who so admire my opponent are upfront about their objectives," the Arizona senator said in his radio address. "They use real numbers and honest language. And we should demand equal candor from Sen. Obama. Raising taxes on some in order to give checks to others is not a tax cut; it's just another government giveaway."
Obama responded a few hours later in his appearance before one of the largest crowds of his campaign in St. Louis, saying his Republican rival "wants to cut taxes for the same people who have already been making out like bandits, in some cases literally."
"John McCain is so out of touch with the struggles you are facing that he must be the first politician in history to call a tax cut for working people 'welfare,'" Obama said.
Obama said McCain "wants to give the average Fortune 500 CEO a US$700,000 tax cut but absolutely nothing at all to over 100 million Americans. I want to cut taxes _ cut taxes _ for 95 percent of all workers," he said.
The exchange unfolded 17 days before an election that is trending Obama's way as he bids to become America's first black president.
Anxiety over the teetering U.S. economy, uncertainty over the wisdom of McCain's choice of Alaska Gov. Sarah Palin as his running mate, and the Republicans' vicious character attacks against Obama in the last month all have been cited as possible reasons for McCain's drop in the polls.
Tax cuts
The differences between the two men on taxes have been present from the early days of the campaign, but lately they have attained greater prominence in the wake of a credit crunch, deep declines in the stock markets and rising joblessness.
McCain wants to retain all of the tax cuts that Bush won from Congress in 2001 and later years, reductions that applied at every level of income. Obama favors retaining Bush-era cuts except on taxpayers making more than about US$250,000, whose taxes would revert to higher levels in effect a few years ago.
Earlier Saturday, Palin urged supporters to turn "an underdog into a victor" as she pitched for votes at a baseball stadium in Lancaster, Pennsylvania, the only Democratic-leaning state which the McCain campaign is still aggressively contesting. However, state polls show Obama with a double-digit lead.
Obama picked up more newspaper endorsements Saturday, gaining the support of the Denver Post, the (Portland) Oregonian, and the Miami Herald. McCain gained the support of the Dallas Morning News.