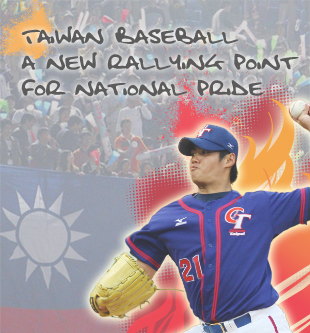 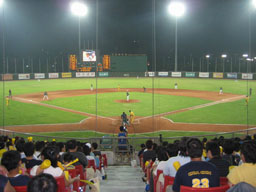 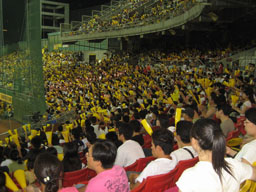 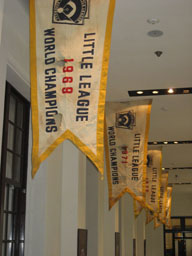 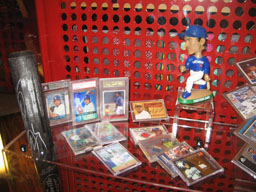 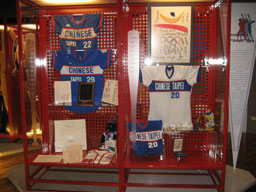 Clapping rhythmically and cheering, nearly ten thousand Taiwanese baseball fans rise to their feet in Taipei's Tienmu Baseball Stadium as two local pro baseball teams Brother Elephants and Uni-President Lions play a regular season game.
Despite the hot and humid weather in Taipei, the ballpark was packed with cheerleaders and baseball fans, some wearing the Elephants' iconic yellow and the Lions' green jerseys. They shouted the names of their favorite players as they see them make a dash for second base, strike a batter out, or walk to first base in a sun-dappled field on an August afternoon.
This isn't a championship game but a regular weekend afternoon match.
The spectacular near sold-out crowd shows that Taiwan people are still frantically in love with what is widely considered the island's national sport.
The fever for baseball is even higher when Taiwan's national baseball squads play in international events such as the Olympics.
When Taiwan's national baseball team played in the just-concluded Beijing Olympics in August, households all over the island anxiously watched or listened to live broadcasts, closely following every pitch and play in the games.
They would yell out loud for homers or whine when the team lost a game.
The national team eventually finished fifth in the eight-team tournament and suffered its first-ever loss to China in a major international event. For Taiwan's baseball fans, it was particularly hard to take. But many still feel proud of the national players who represented their country.

How it all started

Welcome to Taiwan, a country where baseball has a deeper meaning for its nationals than a simple game of bats and balls. Here, the seed of baseball has grown roots and grown into a luxuriant tree of Taiwanese culture.
For a country that has little international space and been deprived of membership in the major world organizations, the game has become a wellspring for national pride with Taiwan baseballers shining out in global competitions, some of them stars of U.S. Major and Minor leagues.
Baseball has been played in Taiwan for more than 100 years. It was introduced by the Japanese who ruled the island from 1895 to 1945.
In the days of Japanese colonial rule, baseball was known as yakyu, the Japanese word for baseball. The game was initially played only by Japanese. But they later promoted the sport around the island to improve the people's physical and mental health.
The first official game played on the island was in March 1906 in Taipei City. Two local schools, precursors of today's Jianguo High School and the Taipei Municipal University of Education drew a 5-5 tie, opening the first page in the history of Taiwan baseball. Soon, other schools and business all over the island started to form teams.
During its budding stage, however, most of the stronger baseball teams were from northern Taiwan, especially Taipei, the birthplace of the sport and home to several prominent schools and companies.
The turning point came in 1931 when a team of students from southern Taiwan's Chiayi School of Agriculture and Forestry beat a team from northern Taiwan. The Chiayi team was made up of Japanese and Taiwan students. Their victory meant that baseball had become a sport of the entire island. They also made Taiwan qualify for a national high school tournament at the Koshien Stadium in Japan where they won Second place over 600 high schools around Japan.
The groundbreaking victory not only earned the Taiwanese baseball players greater respect from their Japanese counterparts, but also encouraged more people in Taiwan to play baseball, eventually making it Taiwan's national sport.

After the Second World War, the baseball fever continued to spread even faster under the Kuomintang government.
The sport gradually turned into a national symbol that united the country especially after it was forced out of the United Nations in 1971.
Interestingly, what first brought Taiwan baseball worldwide fame was a bunch of little leaguers between the ages of 11 and 13. The Little League teams had done amazingly well and had dominated in the world competition held annually in Williamsport, Pennsylvania for decades.
In the 27 years from 1969 to 1996, Taiwan won an incredible 17 Little League World Series Championships-an overall number second only to the United States and almost three times in comparison with the third place, Japan.
Outstanding performance in the competitive sport turned into a source of national pride, symbolically achieving for Taiwan on the international stage what diplomacy could not. The local teams' victory in foreign lands helped to promote the island nation to the world and also lifted the people and the government of Taiwan to regain self-esteem.
Whenever these hometown boys played for championships on the other side of the globe, every Taiwanese would stay up late until the wee hours of the night to watch or listen to the broadcasts.

The birth of pro baseball

The amazing performance of the local teams had built Taiwan into a new global stronghold for baseball. National teams had also begun to shine in the Summer Olympics after the sport was introduced as an event.
The Taiwan team won the bronze medal in the 1984 Los Angeles Olympics and the silver in 1992 in Barcelona.
As the sport grew even more popular in Taiwan, especially with the Olympic medals, local baseballers formed the Chinese Professional Baseball League in 1989. The Uni-President Lions and the Brother Elephants played the league's first game at the Taipei Municipal Baseball Stadium on March 17, 1990.
In 1997, the Taiwan Major League was founded because of a CPBL broadcasting rights dispute. But after running losses, the two leagues merged and Taiwan's total of six ball clubs were born.
Despite some cases of game-fixing that would cause some disillusionment among fans, in the 18 years of its history, the league continued to run and is still the only professional sports league in Taiwan.
In 2002, slugger Chen Chin-feng signed by Los Angeles Dodgers making MLB debut which made him the first Taiwanese to play in the U.S.'s Major League Baseball. Four other Taiwanese baseball players were later drafted to play in the MLB.
The most famous Taiwan-born player is the New York Yankees' ace starter Wang Chien-ming whose 44 wins from the beginning of the 2006 season to May 26, 2008 beat any major league pitcher during that stretch.
Wang also holds the record as the Major League's quickest pitcher to reach 50 wins in two decades, earning him the name "Taiwan Glory."
For Taiwanese people, not only baseball fans, watching Tainan-born Wang's games on TV once a week has become a national pastime and an islandwide phenomenon.
Wang and the baseball players who have made it to the U.S. major league are the best evidence that the nation is indeed a baseball stronghold in the world.
More than a hundred years have passed since the Japanese first played a baseball game on Taiwan soil and the sport continues to flourish in Taiwan.
National pride may no longer rest on fast economic growth rates nor on Taiwan's being Silicon Island-but yes, a baseball island. National dignity has found another rallying point and it's a sport that's bound to stay for another hundred years.