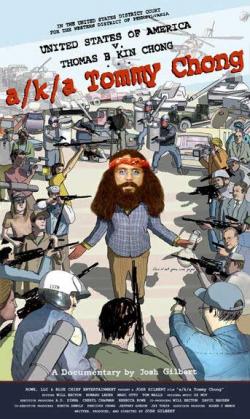 Tommy Chong's glory days of starring as the latter half of the pothead comedy act Cheech & Chong were decades behind him.
And then he went to prison. A documentary, "a/k/a Tommy Chong," on how he was jailed for his reputation, part of a nationwide sting aimed at sellers of pot paraphernalia, has won awards at film festivals. The movie comes out on DVD Tuesday.
"You do not have to approve of drugs to be offended" at how Chong was treated, critic Roger Ebert wrote.
Selective prosecution
Chong became a symbol for victims of the politicized Bush Justice Department, which followed up its "selective prosecution" of Chong by seizing 10,000 copies of the DVD last May, even though he doesn't profit from the film.
"The Justice Department? They're my best career boosters," Chong jokes.
Chong's stand-up act was re-invigorated. His long-estranged partner, Cheech Marin, agreed to re-form their act and take it on the road.
But there's a cautionary tale in Chong's story. We reached him at his home in Pacific Palisades, California.
'No American is safe'
Question: Why should the average American care about what happens to a guy who's famous for what you're famous for?
Answer: The American Dream is based on "the pursuit of happiness." The government found a way to take that away from me, and by incarcerating me for putting my name on water pipes, they can selectively prosecute anybody. Somehow, sending a piece of glass through the mails, or "conspiring" to send it, is a crime. If they can lock me up for that, no American is safe.
Q.: The film shows us that your son's company was lured, tricked into shipping pipes to a state where they're not allowed. Is there anything, in retrospect, that you could have done differently?
A.: They were determined to get me, and that's why I went to jail. Had I been a criminal, I would've been protected. I'm just an American citizen who got caught up in a PR campaign by the Bush administration.
But I'm their bad karma, by the way. They arrested a popular guy. And everybody wants to hear my story. Now I've got a DVD, Cheech and I are touring. I do interviews about the why and how of what they did all the time. I'm that headache that won't go away for them.
Q.: What was the low point for you?
A.: Oh, that first night in jail. I had a bad, bad attack of claustrophobia. There was a prisoner in the bunk above me, one off to the side. They're men, so they're making men sounds. I could hear the doors being locked. I had a real panic attack. Then, I got calm. I felt "the presence." After that first night, I had the best experience of my life.
Q.: When did it start seeming funny to you?
A.: That next day. It was like going on a cruise, because every dude in there knew who I was. If they didn't know the records or movies, they knew the TV ("That '70s Show") show.
The prison thought they were punishing me more, putting me right across the hall from the bathroom. But I'm an old guy. That came in handy!