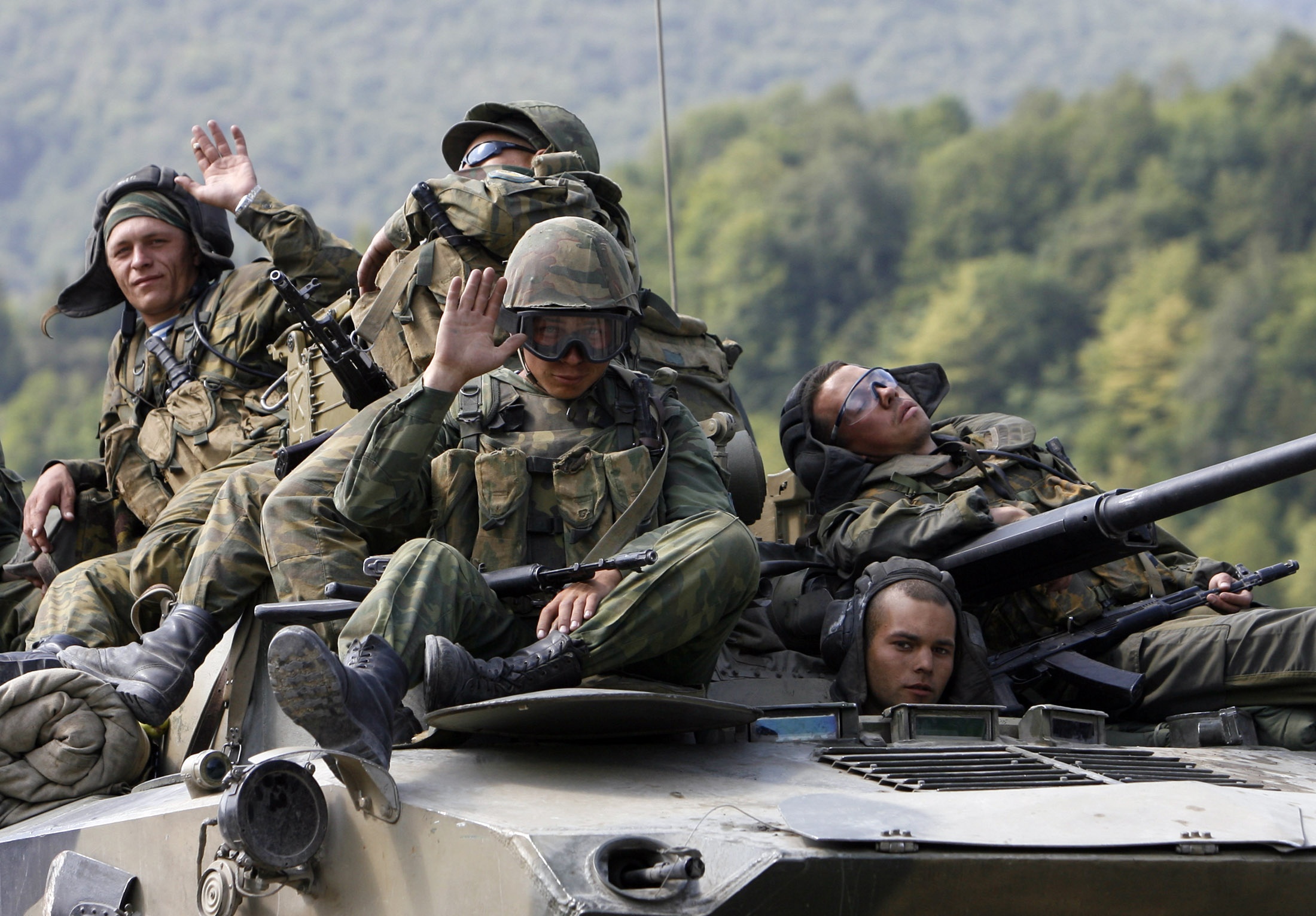 Russian forces began to pullout from parts of Georgia yesterday, but a top general said hundreds of soldiers would remain deep inside the country along the main strategic highway.
As the United Nations again failed to agree on a resolution on the conflict, Russia finally began to withdraw, in line with a French-brokered plan, from the strongly pro-Western ex-Soviet republic.
Troops poured into Georgia on August 8, initially to repulse a Georgian assault against Moscow-backed separatists in the South Ossetia region, then moving quickly to occupy areas beyond.
An international outcry has sent Russia's already chilly relations with the West into crisis.
Twenty Russian military vehicles carrying hundreds of troops headed north from near the Georgian city of Gori toward the separatist region of South Ossetia, an Agence France-Presse reporter said.
The nine tanks, nine trucks carrying troops and two armored personnel carriers headed towards the South Ossetian capital Tskhinvali.
"The troops are leaving," Russian Lieutenant Colonel Andrei Bobrun said at the scene. "By 10:00 p.m. (local time) all the Russian troops in the area will have left."
In the west of the country, troops left a barracks in Poti, a key oil port. However they were dug in at a checkpoint between the towns of Senaki and Zugdidi and also between Poti and Senaki.
Russia says 500 "peacekeepers" are to remain in a buffer zone around South Ossetia. An unknown number of combat troops also remain inside South Ossetia as well as another Moscow-backed separatist zone, Abkhazia.
In Moscow, the deputy chief of general staff, Anatoly Nogovitsyn, showed journalists a map detailing what he said would be Russian "peacekeepers" "zone of responsibility."
This includes control of a key highway linking the Georgian capital to the sea.
Military posts are to be established outside Poti and troops will have the right to deploy anywhere on the road between Poti and Senaki, according to the map.
Two other stretches of the same road that come within the "zone of responsibility" flank Gori, just west of Tbilisi, the map showed.
The deployments effectively strip Georgia's control of the main east-west road, a vital economic artery.
In addition, Novogitsyn said that "if needed we reserve the right to boost these forces with units from the Russian peacekeepers contingent."
Georgian National Security Council Secretary Alexander Lomaia told AFP that he would meet later with a Russian commander to discuss Russian deployment plans.
"We will listen to him, but of course it's not Russia that must decide these things unilaterally," he said, referring to the French-brokered peace plan.
Western capitals have rallied around Georgian President Mikheil Saakashvili, who is seeking NATO membership for his country of just under five million people.
U.S. President George W. Bush told Saakashvili on Thursday that he wanted a quick end to Russia's "siege," the White House said.
"In the phone call, President Bush said that the United States is looking for Russian compliance with the agreement to withdraw their forces and an end to their siege of Georgia," said spokesman Gordon Johndroe.