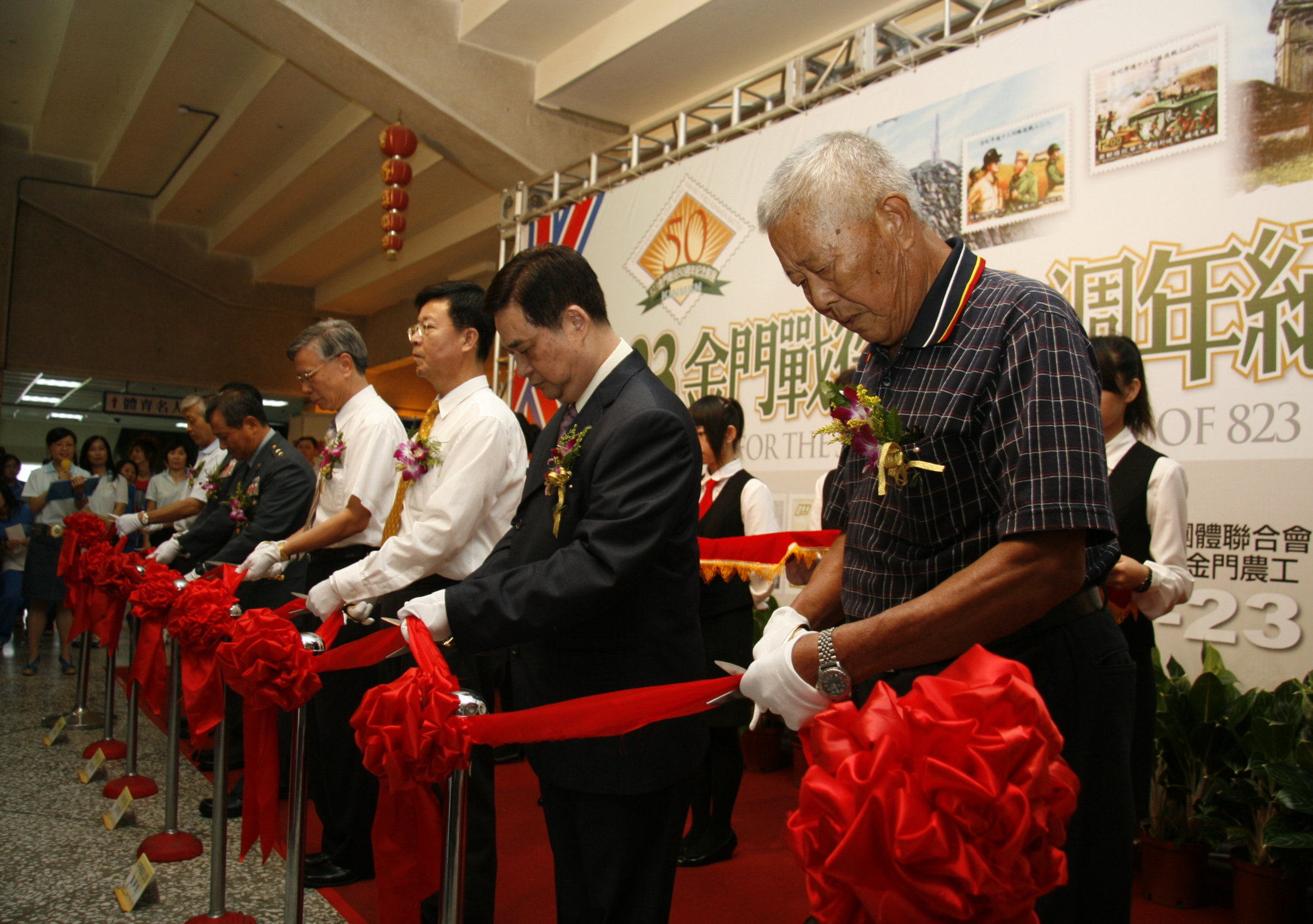 He is one of a few postmen in Taiwan to have won the Kuanghua medal from the Ministry of National Defense, as a result of his part in the 1958 artillery battle between China and Taiwan.
However, on the eve of the 50th anniversary of the battle, 74-year-old Tung Kuo-chung said he would happily give up his medal in exchange for peace if he had the choice.
The battle began August 23, 1958 when the first shot fired by Chinese artillery troops deployed across the narrow strait from the Taiwan-controlled island of Kinmen exploded on the tiny island at 5:30 p.m.
That first barrage lasted for two hours, during which Chinese artillery troops pounded the island with more than 57,000 shells.
Tung, 24 at the time, was serving as a postman at Kinmen's now-defunct First Military Post Office, which was responsible for delivering letters to various military units on the island.
Tung's beat covered Mount Taiwu, which housed the Kinmen Defense Command and was therefore the target of China's heaviest attacks.
As a young man who grew up on the frontline island, Tung was no stranger to artillery attacks, but none so intensive as the one the island underwent in that battle.
In order to deliver his letters, Tung went on his regular round between volleys, crawling from position to position and taking shelter in bunkers or whatever object could shield him from the Chinese shelling.
As there were no telephone links between Kinmen and Taiwan at the time, Tung knew that letters were the only link between soldiers pinned down by artillery fire and their families in Taiwan.
It was about 2 a.m. the next day when Tung finished delivering all the mail he had received August 23 and returned to his home at Gugang, in southern Kinmen where his mother, wife and 23-day-old baby girl were waiting anxiously for his return.
He knelt down in front of the flickering flame of the "Heaven Lantern," which was supposed to bring his family the blessings of the Emperor of Heaven, and the tablet of his ancestors enshrined in the family altar, thanking them for his survival.
The relentless artillery barrage lasted for 44 days. Chinese troops hammered the 148 square-kilometer island with more than 474,000 shells - a rate of four shells per square meter.
At the peak of the barrage, the whole island was shrouded by a thick cloud of smoke and many residents and soldiers hunkered down in bunkers and shelters could hardly breathe because of the reek of gunpowder.
Tung carried on with his job despite the danger, visiting the different positions to deliver letters to the soldiers and learning to predict the distances of the explosions by the sound they made.
The reward was more than adequate compensation for the risks he was taking, as Tung was welcomed by the soldiers wherever he went with his post bag.
The soldiers greeted him with applause, shouting "long life to the postman, " or carryied him on their shoulders as a hero before poring over the letters he brought.
Tung would collect letters and money the soldiers wanted to send back to Taiwan, as well as buying postage stamps for them.
His services earned him the nickname "soldiers' vitamin" on the island and the Kuanghua medal after the battle.
The barrage took a heavy toll on the island, taking the lives of around 500 military personnel, including the three deputy commanders of the Kinmen Defense Center, and 80 civilians, and leaving hardly a house undamaged.
Tung, who retired from the Kinmen Post Office in 1996, recalled that his teacher at elementary school had encouraged him and his classmates to "reclaim the Chinese mainland and eat a bowl of noodles at Nanjing."
Nanjing was the capital of the Chinese nationalist government before it lost a civil war to the Chinese communist regime and relocated to Taiwan in 1949.
Tung said he did eat bowls of noodles - not only in Nanjing, but also in Shanghai, Guangzhou and Beijing on the mainland - not because Taiwan won the war against China but because the two former civil war rivals decided to bury the hatchet and reach out to each other after 1987.
Tung lent his medal for permanent display at the Postal Museum in Taipei after the battle. The Directorate General of Postal Services considers him a paragon for his dedication to his job amid the flying shells and hopes his courage will rub off on his fellow workers.
Looking at his grandchildren toddling around him at his Gugang home, Tung said he hopes his descendants will live in peace forever and will never suffer the ordeal of war.