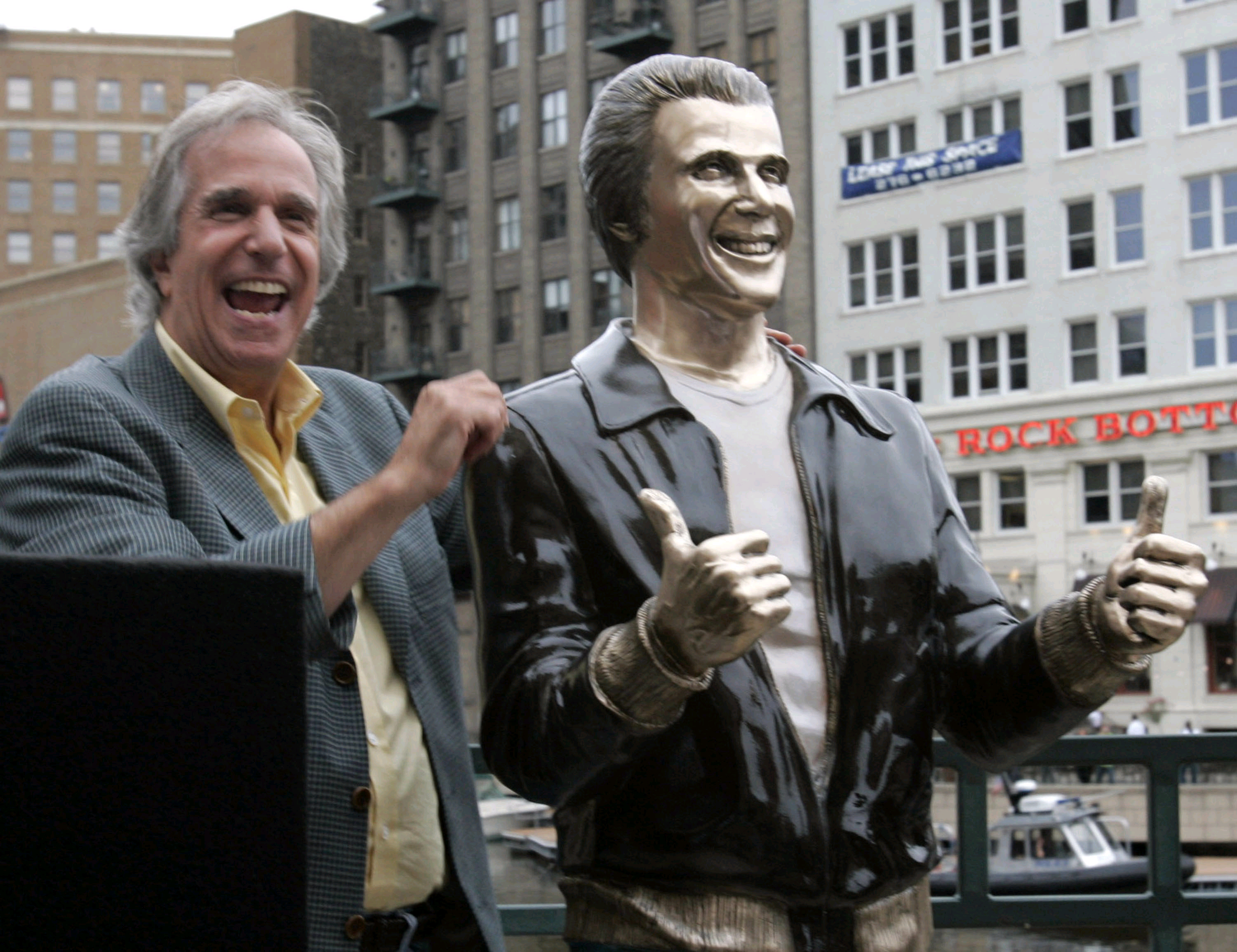 Reality and TV collided Monday when Cindy Williams, whose "Laverne & Shirley" character was a brewery worker from Milwaukee, stepped foot for the first time in a Milwaukee brewery and ran into the Fons.
That would be Karen Fons from human resources at MillerCoors here. "To the other Fonz," Williams signed on her shirt when she popped in at a celebration to celebrate 1 million safe working hours at the brewery.
A few miles away, Anson Williams was touring the Harley-Davidson Museum, celebrating the motorcycle lifestyle associated not with his own "Happy Days" character, Potsie Weber, but rather with the Fonz.
It's all about the Fonz
In Milwaukee this week, it all comes back to the Fonz. And it's raining "Happy Days" and "Laverne & Shirley" stars who have come to help unveil his bronze likeness and praise his alter ego, Henry Winkler.
Tuesday morning, a statue of "Happy Days'" lovable tough guy Fonzie was dedicated on the Riverwalk. From now till forever, locals and visitors will be able to pose with the leather-jacketed icon, his thumbs aimed skyward in a silent "aaay."
"We're so proud of Henry, and we're proud of the show," Anson Williams said.
Told that there are some people in Milwaukee who think it harms the city's cosmopolitan image to keep reminding everyone that both these silly TV shows were set in the town, Cindy Williams said, "Who are these people?" in that same simmering voice Shirley Feeney used when she was about to lose her cool. "Let's get a loudspeaker and drive through their neighborhoods. Why wouldn't they want to be part of pop culture as well as the ballet, the opera and other arts?"
"Laverne & Shirley" was a spin-off of "Happy Days" and equally popular.
'Good feelings'
Anson Williams (no relation to Cindy; his real last name is Heimlick, and despite the different spelling he's related to the guy who invented the thrust used on choking victims) said the past is worth remembering, even the pretend TV past.
"It's good feelings. It's a smile," he said about the Fonzie statue. "Art is an experience. Art is a connection."
It's been decades since these shows went to reruns, but people seemed delighted to encounter the two early arrivals, especially Cindy at the brewery. Worker Carl Lunowa presented her with a beer bottle that had a work glove pulled over the top, a gesture that was instantly familiar to anyone who watched "Laverne & Shirley."
Anson proclaimed Milwaukee to be prettier than his home of Malibu, California Cindy, who has two grown kids and lives in the San Fernando Valley, called her adopted Milwaukee "a hip little hideaway." Both said they've been here numerous times over the years, but less lately.
Cindy now is doing mostly stage work. Anson has been directing TV shows, and he's pushing a line of skin products and drug-free remedies.
Anson brought two of his five daughters along on the visit. Jessa, 10, swore she has never seen "Happy Days." Hannah, 19, watched just one episode that involved her dad wearing a dress, and she didn't want to see any more. "Our house isn't big on watching TV," she said.
Anson's favorite "Happy Days" episode? "Every one I'm in," he joked. For "L&S," Cindy picked the two-part "Murder on the Moose Jaw Express" and a show where the gals take part in an experiment that deprives them of sleep and food to hilarious results.
Neither actor seemed upset over the lack of a bronze Shirley or Potsie.
"There were Laverne and Shirley dolls," Cindy said, "which were pretty frightening."