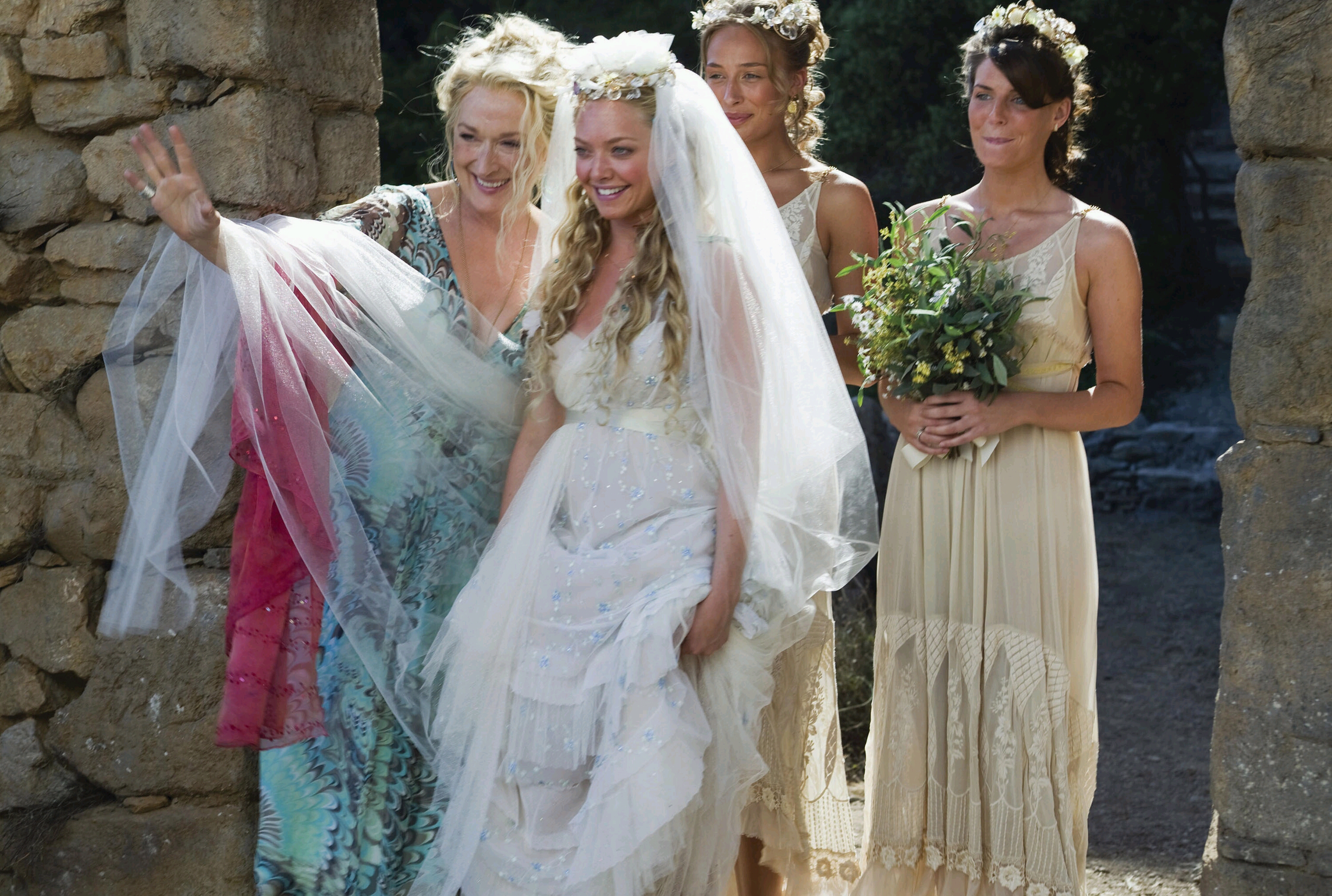 'Mamma Mia!' 媽媽咪呀
Directed by Phyllida Lloyd
Staring Meryl Streep, Pierce Brosnan, Colin Firth, Julie Walters, Stellan Skarsgard
Opens Taiwan: Today
"Mamma Mia!" is a pajama party of a musical, a stay-up-too-late, sing-in-front-of-the-mirror, worry-about-the-mess-later romp. It gets by on the featherweight golden oldies of ABBA and the treat of seeing and hearing some golden oldies of the cinema break character and belt out a song.
This took some guts. Pierce Brosnan risked life and limb many a time as James Bond, but he's never been braver than he is here when he woos an old flame (Meryl Streep) with a close-to-on-key cover of ABBA's "S.O.S."
Brosnan, like the rest of the cast (Colin Firth, Julie Walters, Stellan Skarsgard and Christine Baranski among them) puts these vintage bubblegum tunes over with charisma alone.
The plot, concocted for the stage as a vehicle for ABBA songs, shows its clumsy patchwork on the big screen. Twenty-year-old Sophie (Amanda Seyfried), raised in Greece, invites three men to her wedding - Mom's old flames, one of whom she is sure must be her father.
The bride-to-be moons through songs with her two girlfriends. Mom and her two girlfriends vamp down memory lane. And the three would-be dads meet, bond and sing and try to figure out why they've been summoned to sunny Greece, where each enjoyed a lovely tryst with Donna (Streep).
First-time feature director Phyllida Lloyd takes the idyllic setting, the A-list cast and the effervescent songs and tries not to muck it up, with mixed results. The staging is often pedestrian; the acting, ham-on-wry. But try to keep from grinning. Hating on ABBA is like kicking a kitten. You can't do it.
Things begin dully as Sophie croons a couple of songs. Then Mom realizes three ex-beaus have shown up at her tiny Greek hotel (she doesn't know why), and Streep launches into the title tune.
The middle-age mom is transformed into her giddy, disco-age self, manic over juggling men whom she wanted out of her life, frantic at what this means to the wedding.
But Streep is upstaged by her former backup singers, played by Walters ("Educating Rita") and Baranski (of TV's "Cybill"). Walters was never anybody's idea of a chorine, but girlfriend, pushing 60, nails song after song, landing most of the laughs and blowing "Take a Chance on Me" right out of the Aegean. Baranski delivers the showstopping "Does Your Mother Know" with panache and raunch.
The younger leads are pleasant enough (Dominic Cooper is the would-be groom), but it's the people with mileage on them who come to life here. Skarsgard ("Good Will Hunting") is the epitome of the grizzled old seafarer-travel author, Firth a delightful British priss of a banker and Brosnan properly dashing (and paunchy) as one guy who never recovered from Donna's charms. And Streep makes every scene, every song she's in, pay off.
Old-fashioned? Yes? Comparable to "Hairspray" or even "Across the Universe?" No. But if you're old enough to remember the songs, "Mamma Mia!" is your "Waterloo," as in: "How could I ever refuse? I feel like I win when I lose."