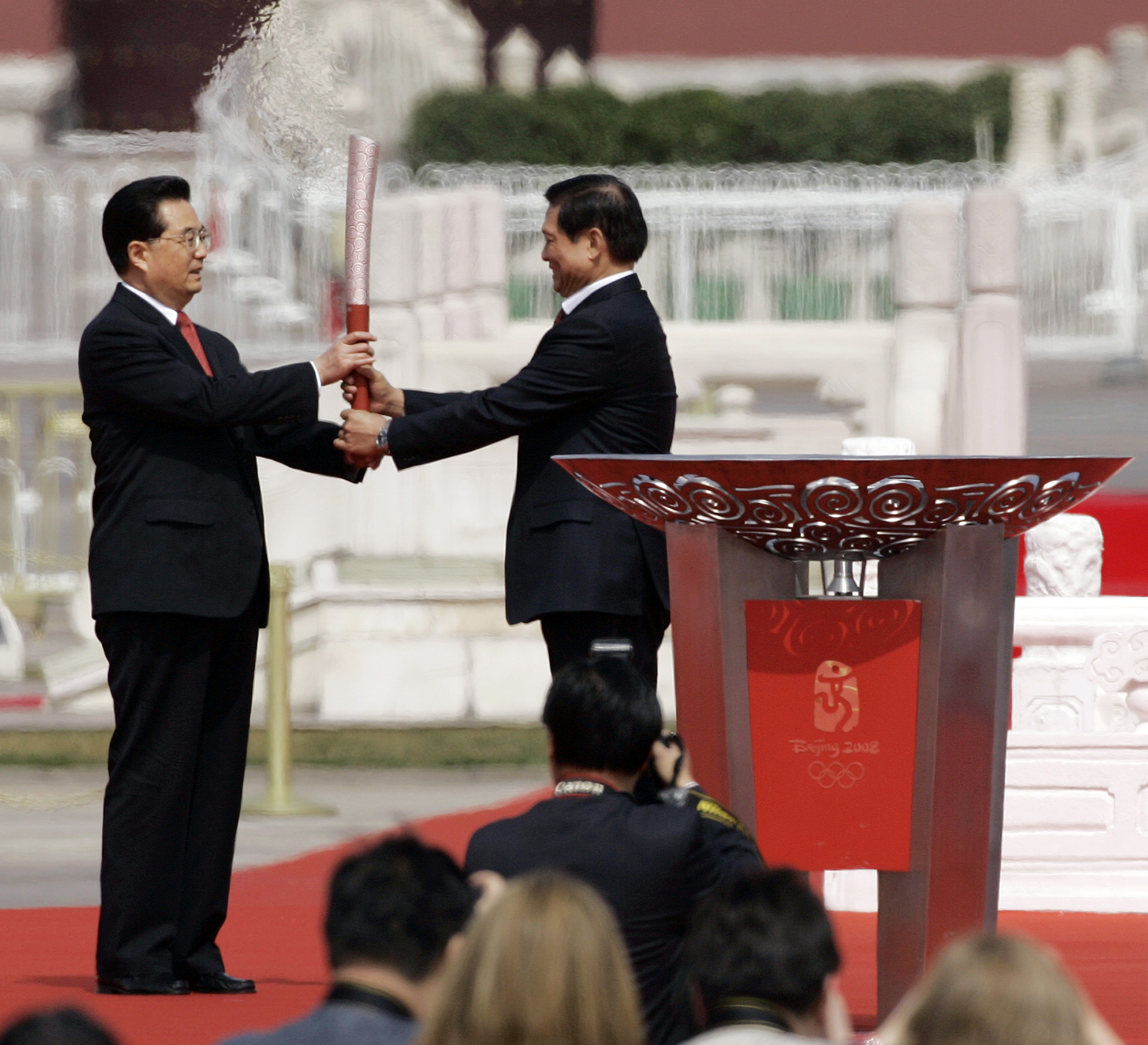 China celebrated the start of the Olympic torch relay yesterday, but heavy security highlighted concerns that protests over Tibet, human rights and other issues may tarnish its historic journey.
China's President Hu Jintao (胡錦濤) officially launched the flame on its globe-trotting journey at a nationally televised ceremony from Tiananmen Square, Beijing's political heart, after it arrived from Greece.
The 130-day relay, hailed as the most ambitious ever, will cross 19 countries before returning to China for a three-month tour that includes an ascent of Mount Everest.
Hu held aloft the torch before passing it to Liu Xiang, a Chinese sporting icon who is the reigning 110-meter hurdles Olympic and world champion.
However tight security showed that China's communist rulers were intent on ensuring the torch relay would begin without any hint of the protests that activists have threatened.
Square sealed off
Authorities sealed off Tiananmen Square -- the scene of democracy protests in 1989 that were crushed by the military -- on Sunday night ahead of the torch ceremony.
Security personnel could be seen on surrounding buildings, and nearby subway stations were closed off to prevent unauthorized people intruding on the ceremony.
Activist groups have warned they intend to use the torch relay to highlight their many concerns over China, including the crisis in Tibet, Beijing's close ties with the government in Sudan, and domestic human rights issues.
The highest profile issue on the global agenda is Tibet, where a crackdown on three weeks of protests against Chinese rule of the remote Himalayan region has raised concerns among world leaders.
Yesterday, China has stepped up attacks on the Dalai Lama, blasting him for abusing religion, stirring protests in Tibet and preparing for independence as the Olympic flame arrived in Beijing on Monday under tight security.
Evidence found
A report by Xinhua, China's official news agency, said the government had evidence the Dalai Lama and his supporters had planned the rash of anti-Chinese unrest across the Himalayan region and nearby areas this month.
The Olympic torch will pass through Tibet for the Everest leg in May, and then again when it goes through Lhasa in June. Chinese officials have already pledged tight security for the Tibetan legs.
Pro-Tibet activists and other groups have said they are planning protests at key torch relay locations, including London on April 6, Paris on April 7 and San Francisco on April 9.
Other potential protest spots include New Delhi on April 17. The Chinese government has already approached India about security arrangements.
India is home to the Tibetan spiritual leader the Dalai Lama and many other exiled Tibetans.
The torch heads to Almaty, the capital of Kazakhstan, today.