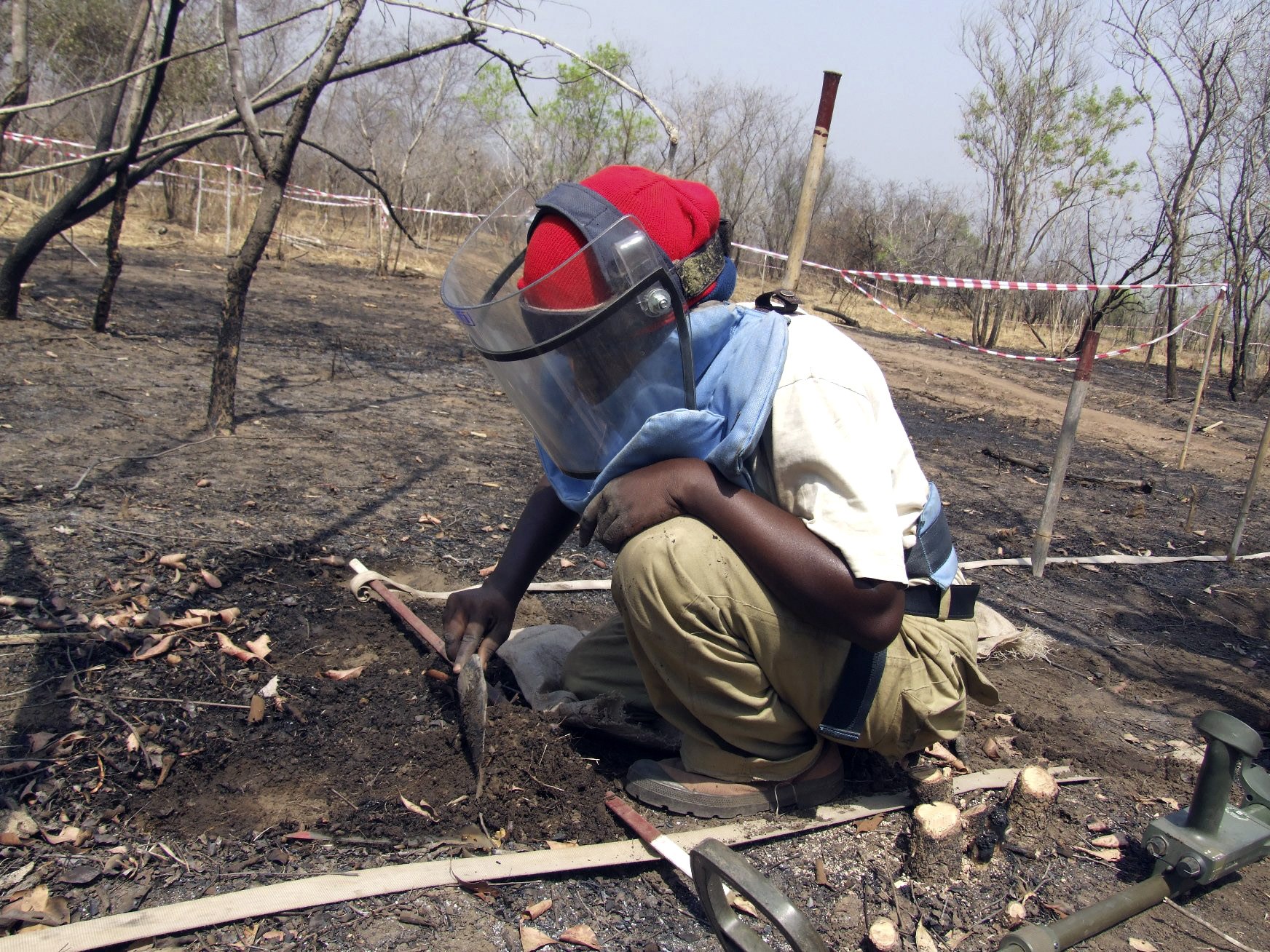 Seven-months pregnant Opayi Mary stands half a meter away from a mine made expressly to blow anything over 3 kilograms to pieces. For her, it's just part of a day's work.
Mary leads an all-female team of deminers working for Norwegian People's Aid in one of south Sudan's most dangerous areas: the civil war battlefield Mile 38.
The location, 38 miles from the southern capital Juba, was on the frontline in a decades-long conflict between mainly Christian and animist southern rebels and the Islamist government in Khartoum.
The war, fought over ideology and ethnicity and fuelled by oil, killed 2 million people and displaced 4 million before a peace deal was signed in 2005.
Now, south Sudan's semi-autonomous government, which will hold a referendum on secession in 2011, is trying to rebuild a region where even the most basic infrastructure is lacking.
Clearing the thousands of mines is an important part of efforts to rebuild the devastated region, where mined roads have made travel and transport of goods difficult.
"I was so afraid of my first one," Mary admits. Two years later she is now in charge of her group's safety and for exploding the mines taken from this empty scrubland.
"Now I have taken more than 20. I can even hold them with my hand," Mary grins. She is short and seems all burgeoning bump but walks fast between cordoned off areas.
Under Mary's watch, Joanne Jenty slides a prong into a marked-out area in front of her that she has already wetted. In the hot silence of the bush and on her hands and knees, she is feeling for the side of a mine that she will then delicately unearth.
People used to live along this major trade route but have been slow to return since the war ended, deterred by a lack of infrastructure, worries of a return to fighting and the lines of hidden explosives buried just inches under the earth's surface.
The U.N. Mine Action Office, which coordinates demining projects run by dozens of groups, says more than 2,000 people have been killed or injured by mines since the end of the war. The cost for farmers and communities is incalculable, it says.
Still a struggle
With a new administration and funds of between US$1.5 billion and US$1.7 billion a year from the region's share of oil revenues, many southerners were expecting dramatic peace dividends for communities long alienated from basic services by war.
They have been disappointed. The daily struggle for survival has not changed for most rural populations and returning refugees put more pressure on scant resources. A government study showed around 90 percent see corruption as a major problem.
And the peace is still shaky.
In December and January, Misseriya tribesmen fought southern soldiers in the Abyei area, an oil-rich region straddling northern and southern Sudan. The distribution of oil revenues and border demarcation remain contentious issues.
But Mary, who fled the war to neighboring Uganda, believes passionately that peace will hold.
"My work is like a soldier," she explained.
"When we are in training we learn: your first mistake is your last," she said as she showed her simple bush tent that contained a fancy handbag and a bottle of nail polish.
So far, Mary's team and another NPA team have removed 205 antipersonnel mines and 96 anti-tank mines from around the main road that links neighboring Uganda to Juba, the capital of a vast and wild region that still has no large commercial farming or factories.
For Mary, who feels her baby move as she works, the job just has to be done, inch by grueling inch in prickling grass.
"We have to work hard to develop our country, even if it is hard," she said. "We have to clear. For my children and for others."
Mary initially wanted to be a doctor but could not afford the training. But her pragmatic mind has adapted well to clearing contaminated earth.
According to Lado Victor, from Norwegian People's Aid, women learn demining techniques as quickly as men but follow procedures more vigorously. The only complication is pregnancy.
Southerners have traditionally raised large families with up to 10 children, and since the war there is a social consensus on the need to repopulate. At any one time, a handful of the 25-woman team are pregnant, Victor explained.
The women used to have in-camp sitters who would look after the babies while they were in the minefields. But the sudden appearance of a rabid dog from the wilderness encouraged NPA to enforce longer maternity leave.
Mary will eventually leave her child with her mother in a nearby town. She admits that especially since she became pregnant for the first time there has been growing pressure on her to stop what many in the traditionally conservative south see as masculine and dangerous labor.
"A lot of people tell my husband he should stop me," she said. "I just don't mind it," she adds.