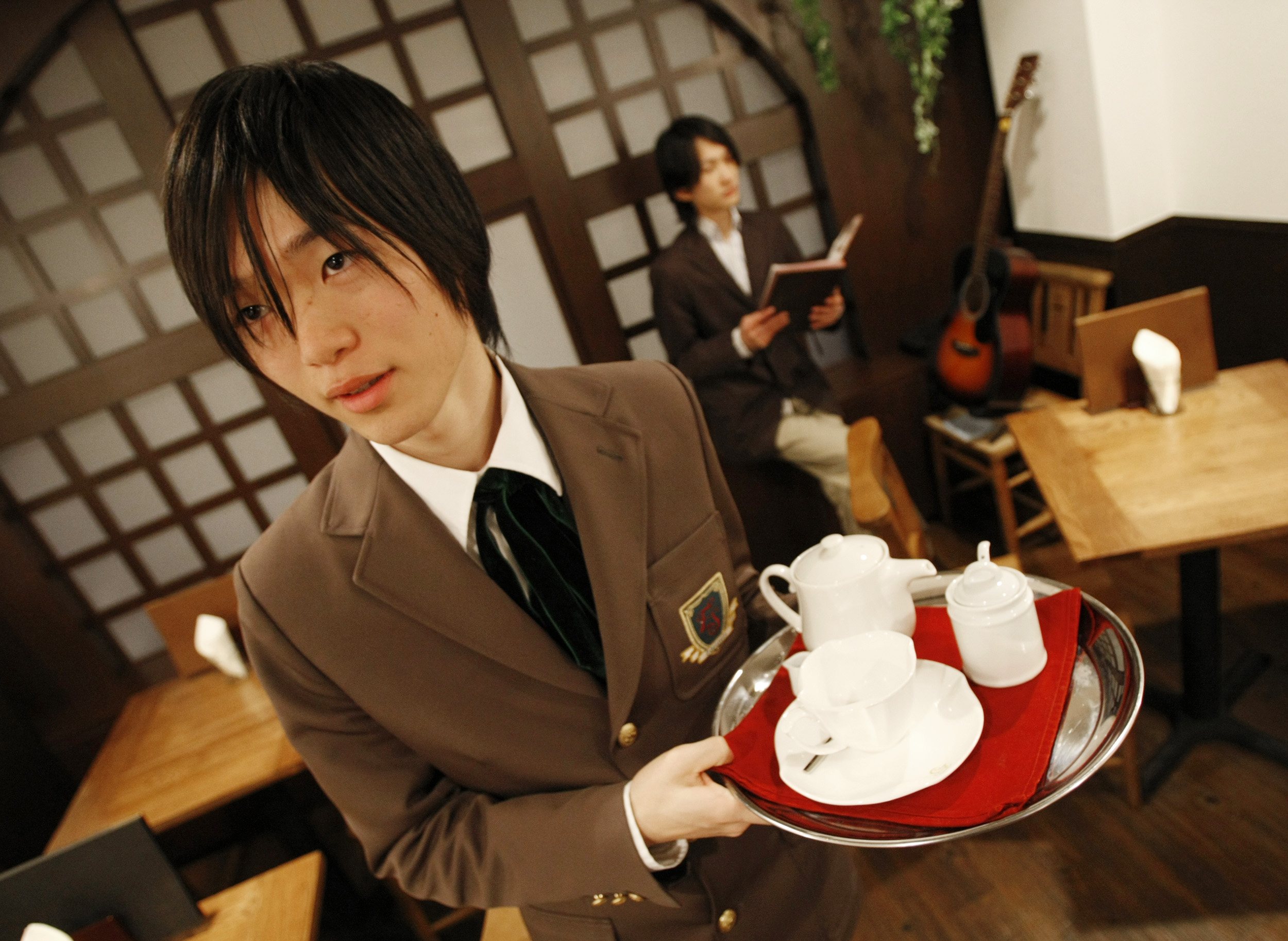 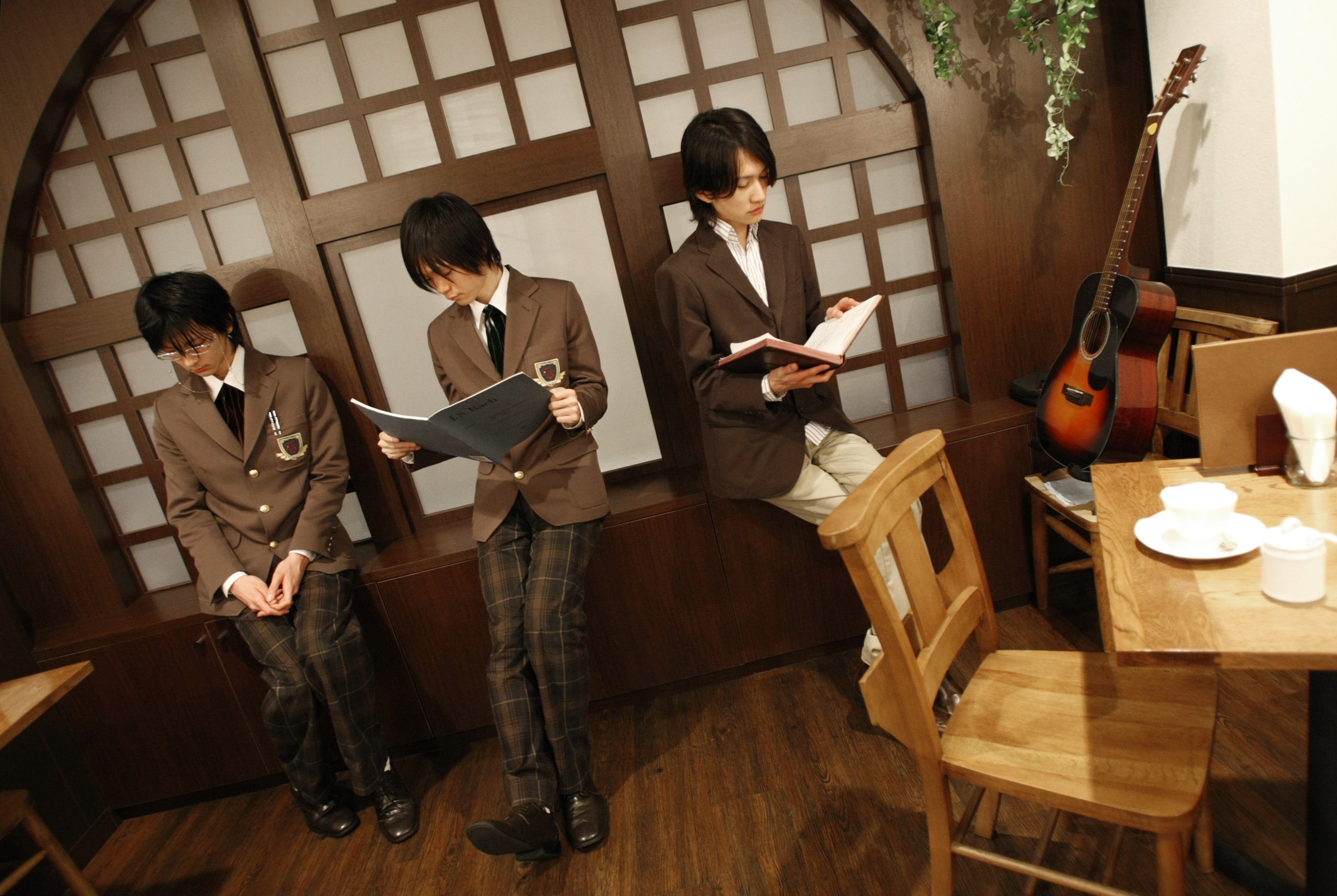 At Edelstein boarding school, the schoolboys wear lip-gloss, the headmistress has a weakness for homoerotic comic books, and there is only one subject: how to serve female visitors.
Welcome to Tokyo's first schoolboy cafe, the latest in a flurry of eateries in Japan where customers and waiters role play themes from manga comics.
In keeping with the schoolboy theme, waiters with manicured hands and soft voices pretend to be teenage students, chatting and flirting with well-dressed Japanese women playing the roles of benefactresses visiting the school.
On a Saturday in January, the cafe, which opened late last year, was packed with giggling customers.
"Most of our customers are office ladies in their twenties and thirties, women who are fashionable but normal," said Emiko Sakamaki, Edelstein's 27-year-old manager, herself dressed in a loose mini-dress over skinny jeans and knee-high boots.
Edelstein is based on one of Sakamaki's favorite comic books, a 1970s cult classic about romance at a German school. Its visitors are united by a passion for such "boy-love manga," or comics about boy-boy romance for female readers - a genre that is currently undergoing a huge revival in Japan.
Most boy-love manga feature dreamy, feminine-looking male characters. The same beauty ideal guides Sakamaki when she selects the waiters who talk about their pretend homework and studies at Edelstein.
"I'm in the flower arrangement club," whispers one girlish, long-haired waiter at the cafe, looking up from the book of German poetry he is reading.
Role-play cafes for men have long been popular in Tokyo. Most revolve around waitresses dressed as French maids and target "otaku" - geeky fans of comics and animation movies.
One of the reasons that role-play and dressing up are so popular in Japan is that they allow people to briefly escape the extreme social control and rigid norms of everyday life, anthropologists say.
The otaku market, from animation movies to computer games and accessories, totalled 187 billion yen (US$1.73 billion) in 2007, according to entertainment research firm Media Create. But recently, businesses have discovered another type of free-spending Japanese consumer: the female otaku, who tends to be better-looking, trendier, and more sociable than her male counterpart.
One of the defining feature of the female otaku is their love for manga comic books, especially boy-love manga.
"There are two reasons why this place is so popular. Firstly, this kind of cafe environment for women doesn't exist much in Tokyo," says Sakamaki, who also invented Tokyo's first "butler cafe" for females. "And secondly," she adds, "there are now a lot of girls who like animation movies and comics."
Around 150 boy-love manga and magazines are published every month in Japan, according to Eureka, a literary magazine.
In the women's section of the Aoyama book shop, around the corner from Edelstein, the latest boy-love titles are stacked between books with saccharine pink covers promising sweet tales of pop stars and athletes.
The easily shocked should avoid taking a closer look. The new generation of boy-love manga such as "All about J" and "Don't Say Anymore, Darling" features carefully drawn, often violent sex scenes, ranging from anal and oral sex to bondage and male gang rape.
Sakamaki sees the genre as a form of escapism. "These types of people don't exist in reality, they only exist in comics," she says, referring both to the manga and to the kind of atmosphere she is trying to create at Edelstein.
"In boy-love comics, beautiful, fragile boys are often placed close to death. That gives them a shadow and makes them even more beautiful."
In a recent column in the Yomiuri Shimbun newspaper, Kanta Ishida, a journalist specializing in manga, said the genre also offers an alternative to traditional gender roles in Japan.
Over beer and fried pork at a bar in Tokyo's noisy and neon-lit Shibuya district, three Japanese aged around 30 talk about male and female otakuSampling the fried pork. Takashi Kudo shares his own theory about the sudden excitement over female otaku.
"Male otaku became a huge business, and then that kind of marketing reached a limit. So the marketing companies wondered what they could do next," he said. "And then they discovered that fujoshi can also be big business."