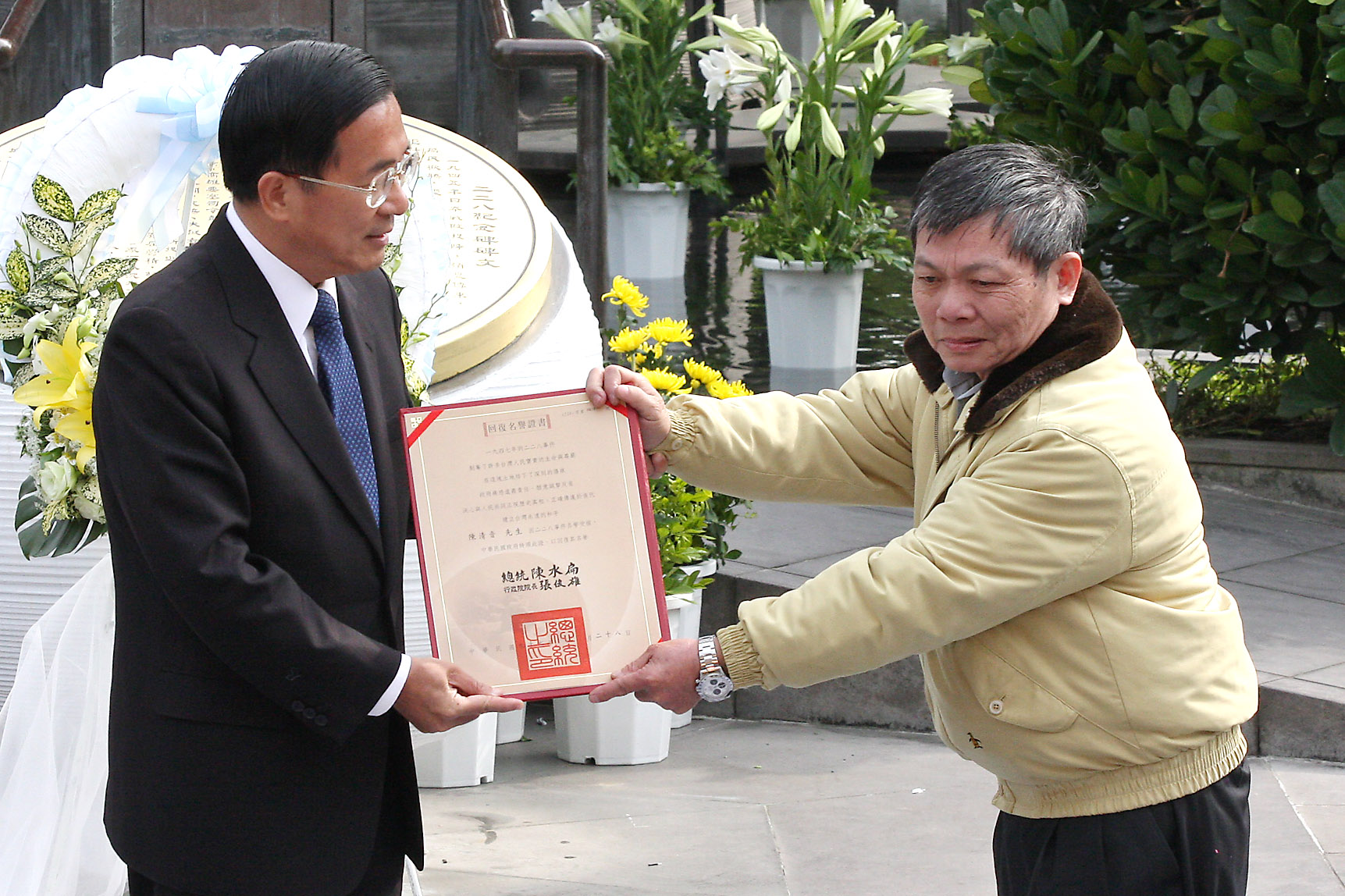 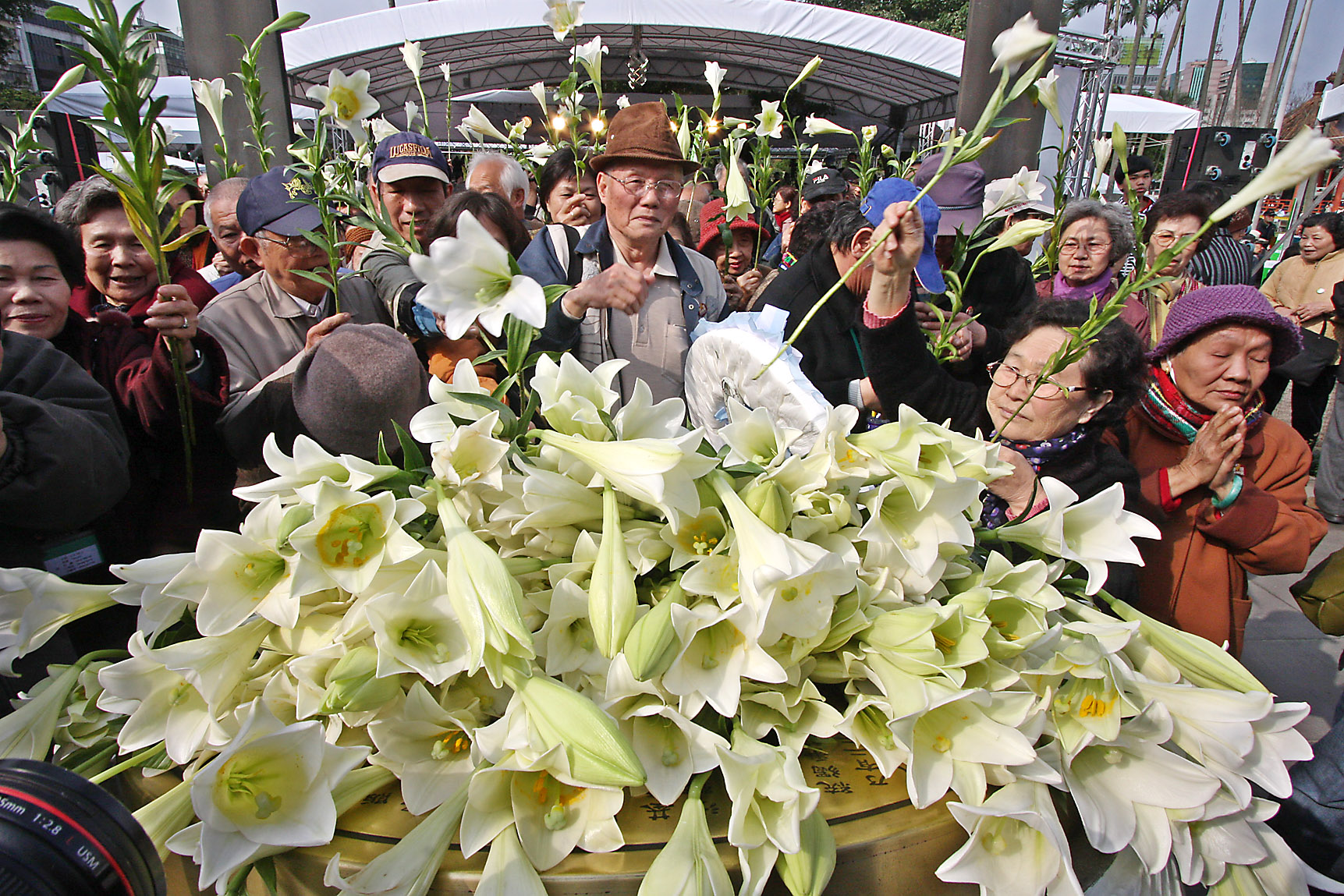 In his last appearance as head-of-state, President Chen Shui-bian (陳水扁) appealed to the people of Taiwan to "uncompromisingly defend" their fundamental human rights. Chen spoke at the annual commemoration of the "February 28th Incident" of 1947, in which over 10,000 Taiwanese were killed by Kuomintang troops under the command of then Republic of China president Chiang Kai-shek (蔣介石) during the suppression of a citizen uprising.
Chen also presented certificates of the rehabilitation of the innocence of four "228" victims before the ceremony ended with the now traditional laying of lilies on the 228 Memorial by several hundred "228" relatives and human rights activists.
In addition to Chen, speeches were delivered by Vice President Annette Lu (呂秀蓮), KMT Taipei City Mayor Hau Lung-pin and February 28 Memorial Foundation Chairman Chen Chin-huang (陳錦煌), and poet Chang Fang-ssu recited a poem entitled "White Aftermath Terror Report."
Chen stated that "some people believe that because the 228 Incident happened over 60 years ago so there is no need to bring it up again" or that bringing up "228" was only done for "political interests" or to "provoke ethnic antagonisms." Chen responded by saying that "if we are unable to face each other's past, we will be unable to build a common future."
The president also emphasized that "228" was "not the conclusion of the suffering of the Taiwan people as 'the 228 Incident' was the beginning of over a half century of authoritarian rule" including four decades of martial law rule.
The president related that it took over a half century for the people of Taiwan to directly elect their president and "be the masters of their own country."
Moreover, Chen declared that the struggle for democracy, freedom, human rights and justice in Taiwan "was not a distant affair of the previous generation but the personal experience of our generation" and called for greater effort to "ensure that future generations can live in an era of freedom and happiness without fear or bitter tears and powerless sighs in the night."
However, Chen said that there remain many unanswered questions that need clarification, including the subsequent suppression of the facts during the military and martial law rule that followed, and whether the responsibility of the former authoritarian rulers should be pursued.
Final appearance
Chen noted that yesterday's ceremony would be the last in which he will appear as president and reminded the audience that "freedom, democracy, human rights and justice are not favors of political rulers but inherent and fundamental human rights of all individuals that cannot be abrogated or restricted."
The president stated that the listing of such rights in the constitution or the legal code was not enough and declared that "real freedom and democracy can but "depend on the totally uncompromising resolution of every individual to uphold their human rights."
"I pray to Heaven to give the 23 million people of Taiwan the courage and wisdom to understand the real significance and meaning of human rights and to defend their human rights from any infringement or oppression," concluded the president.
In his address, February 28 Memorial Foundation chairman Chen Chin-huang related that the KMT had been "unwilling to face" its responsibility for the 228 incident.
Chen related that KMT presidential candidate Ma Ying-jeou (馬英九) had proposed the use of the term "compensation" for the 228 and white terror victims in 1995 when he was minister of justice, while DPP presidential candidate Frank Hsieh (謝長廷), then a DPP legislator, had introduced legislation calling for the provision of "reparations."
Shortly before President Chen's address, Taipei City Mayor Hau Lung-pin told the audience that "we should use a very solemn mentality to commemorate this critical day in Taiwan's history.'
Hau said that the Taipei City government under former mayors Chen Shui-bian and Ma Ying-jeou and himself had worked to "let the Taiwan people understand what happened in this history and find the motive force to help Taiwan society find mutual tolerance and forgiveness" and remember the lessons of the 228 incident.
Hau said he hoped that the Taipei City "228 Memorial Museum" can become a platform for "feelings and truth" for victims or relatives of 228 victims and urged the audience to "build hope and look toward the light."
Hau also stated that "any person today who is a public servant should remind himself that Taiwan is already a democratic society and rulers cannot use violence against the people."
"I also must remind everyone that any policy driven by ideology is a type of force and violence and is a violence of language," Hau stated.
After the ceremony, February 28 Memorial Foundation director of planning Lin Chen-feng told The Taiwan News that the theme of "Taiwan Stands Up" meant in Taiwanese both that Taiwan should "stand up" but also "step out.
Critical election
"This election is extraordinary," said Lin, who stated that "winning or losing is normal in democratic politics, but we cannot allow Taiwan to be completely lost."
"If we lose Taiwan and if we lose democracy normally, we may face a restoration of authoritarianism in politics," said Lin.
Referring to Hau's statement, Lin stated that the KMT regime "did not just use ideology to rule but was something far worse as they used military force as its shield to force their ideology on Taiwan."