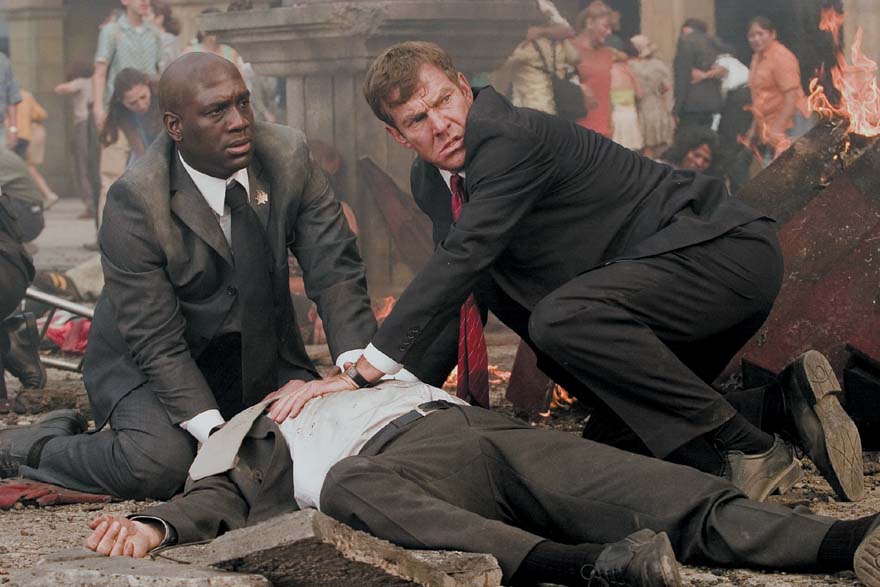 Vantage Point
刺殺據點
Directed by: Pete Travis
Starring: Dennis Quaid, Forest Whitaker, Matthew Fox, William Hurt, Sigourney Weaver
Opens: Wednesday, February 27
"Vantage Point," the second major popcorn movie of the New Year is, like "Cloverfield," quite the contraption. An over-plotted, gimmicky presidential-assassination thriller, its interlocking pieces have to fit just-so for it to stay coherent and ratchet up the tension.
The tricky business here is showing, from half a dozen points of view, a terrorist attempt on the life of a U.S. president (William Hurt) during an anti-terrorism summit in Spain. And it clicks. But unlike the equally gimmicky "Cloverfield," Vantage Point allows us time to care about what happens, about who lives and who will die.
Scenic Salamanca hurtles by at a blur as we follow a cable news network's coverage of a speech that ends with shots fired, and then explosions. Testy exchanges between a reporter (Zoe Saldana, the least convincing player in the cast) and her producer (Sigourney Weaver) suggest this network doesn't want to cover the unpleasant half of a plaza half-filled with a cheering crowd, half-filled with protesters.
"Not everyone loves us," the reporter cracks.
Pow pow BOOM boom, shots are fired, bombs go off. As the smoke clears, the clock and the film rewind to 23 minutes earlier and we see how a veteran Secret Service agent (Dennis Quaid, with his game face on) witnessed the incident.
Tom Barnes is just back on the job after taking a bullet for his boss, and his nerves are showing. Unlike his partner (Matthew Fox), he's suspicious. He reacts to perceived threats. Pow pow BOOM boom, he picks himself up, surveys the chaos, looks at video footage, sees things we don't, yells "Oh my God," and we rewind again.
A tourist with a camcorder (Forest Whitaker, as genuine as ever) tapes it all, trying to sort out the images and confusion. He follows a chase after an armed Spaniard.
Rewind, the screen reads "23 minutes earlier," and we do it again. And again.
Director Pete Travis directs this Barry L. Levy script with one eye on the clock. It's all about tempo, with close-ups and tiny pauses in each sequence sketching in the characters. Repetition helps, as time and again we see a sea of Spaniards retreat from a stage where the president was standing. Travis takes us into the narrow streets on foot or in compact cars, chasing bad guys. The editing and stunt driving give "Vantage Point" the best car chase since "The Transporter."
The body count and the violence rise as we meet the people behind the plot and see the lengths to which they'll go.
It's so breathless that you almost don't notice how insanely intricate this all is. If you thought "Shooter" had a story thread that was hard to follow, you'd better take caffeine into the theater with this one. Blink and you'll miss something - a lot of something.
It's not remotely as smart as, say, "Memento," or even the similarly structured "Crash" or "Amores Perros." And the plot is more complicated than it needed to be. The breathless pace of the chases doesn't hide the odd continuity error (wrecked cars that seem to have been to the body shop between takes).
But take it in and "Vantage Point," by its finale, will have changed your vantage point as well. You'll be watching it from the edge of your seat.