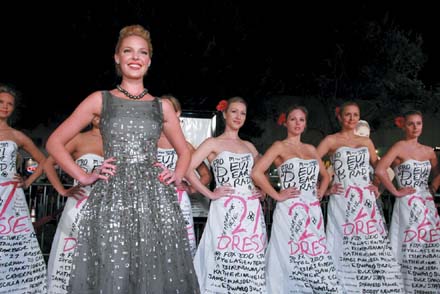 27 Dresses
27件禮服的秘密
Directed by: Anne Fletcher
Starring: Katherine Heigl, James Marsden, Edward Burns, Judy Greer, Malin Akerman
Opens: Wednesday, February 27
Is the long search for the new Meg Ryan over?
That years-long quest to find a leading lady who could make her romantic hurt feel funny is a big reason romantic comedies have struggled in recent years. But could the new Meg be Katherine Heigl?
In the best Meg Ryan tradition, when she pines, we pine. When she hurts, we hurt. And laugh.
In "27 Dresses," Heigl stars as not-so-plain Jane, the dependable friend that every bride leans on when that special day comes along. Jane is the ultimate bridesmaid, helping with the planning, the organizing, the cake-arranging, even the holding-that-big-gown-when-the-bride-must-go-potty.
She is engagingly selfless on other women's "big day."
"It's their day, not mine."
James Marsden ("Hairspray," "Enchanted") finally earns a straight romantic lead role as Kevin, a slightly snarky newspaper reporter who covers weddings, writes warm and witty accounts of them, and longs for "my ticket out of the taffeta ghetto."
They meet cute. She's injured at her umpteenth bouquet toss.
She's idealistic, lovesick for her boss (Edward Burns) and a true romantic. He's cynical and not above using her lost Filofax to stalk her and figure out that she has a thing for weddings, and those often hideous bridesmaid dresses. Could she be a big story? Would such a newspaper account be a violation, to her?
That "big story" presents itself when Jane's dishy model sister (Malin Akerman) comes home and proceeds to sweep boss Burns off his feet. Will Jane be able to stay selfless, or will her heartbreak trump her concern for everybody else's happiness?
The screenwriter who adapted "The Devil Wears Prada" (Aline Brosh McKenna) doesn't surprise us with her destination here. We know where this fight-fight-fight-fall in love comedy is going. Director Anne Fletcher ("Step Up") serves up tried and trite musical montages of wedding organizing, wedding line-dancing, even wedding toilet trips. She also lets the movie go flat-footed at about the 90-minute mark and overstay its welcome.
But there's wit in this script, and Heigl makes the laughs land.
Heigl and Marsden are well-matched. To paraphrase what they used to say about Astaire and Rogers, he gives her charm, she gives him edge.
It's not one for the ages, but this comedy about the "perpetual bridesmaid" suggests a romantic marriage between star and audience that could last and last. Meg would be proud.