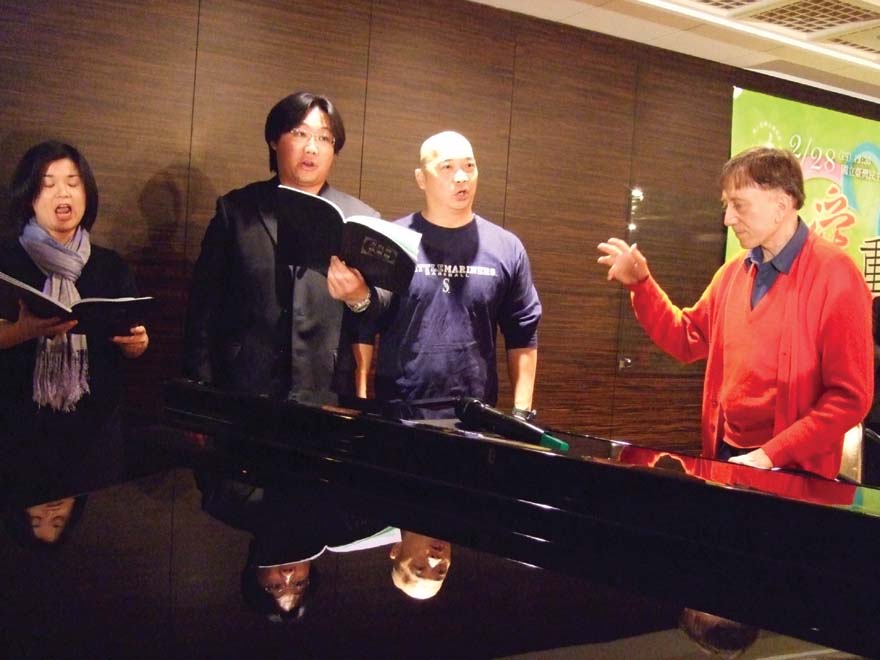 A big, outdoor concert program involving 1,200 musicians and singers, all to perform under the baton of Hungarian maestro Tamas Vasary, will serve to commemorate the 2-28 Incident or the 2-28 Massacre with a difference this year. The concert to unfold within sight of the Democracy Memorial Hall in Taipei at 7:30 tonight has been titled "Love Reborn."
An anti-government uprising on February 28, 1947, resulted in the death of thousands when the Kuomintang authorities violently suppressed it. Many disappeared and others were imprisoned in the wake of the White Terror triggered by the incident.
On behalf of the Council for Cultural Affairs, the National Taiwan Symphony Orchestra has invited the Taipei Sinfonietta and Philharmonic Orchestra as well as the Taipei Century Symphony Orchestra to join this performance in the square outside the National Concert Hall in Taipei this evening.
The expected cold front is making the people responsible for getting this project off the ground a bit anxious. But challenges are still going to be met.
The stage setup takes the safety of the performers into serious consideration. Microphones, all part of a good sound system, as well as big screens to enable all musicians to see the conductor and what exactly is happening, are now in place.
The groups have been rehearsing mostly separately. The National Taiwan Symphony Orchestra has been practicing at its base in Wufeng, Taichung County. The two other orchestras have been preparing for the concert at different places. The chorus has been using a church facility.
There are provisions for 3,000 to 3,500 seated spectators. An estimated 5,000 persons are expected.
The 75-year-old Tamas Vasary has been the NTSO's choice for conductor because of his wonderful track record as maestro. In recent years, he has done recordings of Brahms' compositions. His fame and experience cannot be denied.
Vasary, who studied with Erno Dohnanyi and later worked as assistant to Zoltan Kodaly, can relate to the people of Taiwan, who suffered during the White Terror in the aftermath of the 2-28 Incident.
"I myself left Hungary in 1956 for political reason," revealed Vasary. His father was among the politicians of the reform party working against the government. When the Soviets invaded Hungary to crush the revolution, his father was among those arrested and taken away. The musician had to go to the head of the secret police to find out where his father was taken. He sent a letter to the Minister of Interior, citing as his references prominent individuals like Zoltan Kodaly. After he was assured that his father would not be tortured, he left to honor an invitation to play as winner of the Queen Elisabeth Competition in Belgium.
During an audience with Queen Elisabeth, he asked for help in liberating his father. She, who happened to be very close to the Soviet authorities, interceded.
"The next day, my father was liberated and he got his passport to travel to Belgium," said Vasary.
The repertoire this evening shows the effort to bring together the different ethnic groups in Taiwan society. Chen Shu-si's "Ping Ban" is an example of Hakka music. It requires a suona player. The Chinese oboe fascinates Vasary.
Wang Ming-je's "Taiwan (for Chorus and Orchestra)" will have lyrics written by Li Jr-hau. Vasary described this piece as well as the works composed by Uongu Yatauyongana and Tyzen Hsiao as "simple, lyrical and romantic melodies with pentatonic scale." Chen Shu-si's opening number struck him as like "a joyful dance."
Uongu Yatauyongana's "Train Ride Up the Mountain" captures the feeling of going up the Alishan in a train. It moves forward and then slips back, chugging along till it reaches the destination above the clouds. The original composer came from the Tsou tribe. His music has been rearranged by Chung Yiu-kwong.
Meanwhile Tyzen Hsiao's "Ode to Jade Mountain" has awe-inspiring lyrics written by Li Min-yung. Yushan or Jade Mountain symbolizes the spirit of Taiwan. Its sunrise really takes the breath away.
Sibelius' "Finlandia" - which is stirring 20th century music about Finnish nationalism - likewise belongs in the program.
Beethoven's "Symphony No. 9 - Choral"(4th movement) will also be performed. Schiller's lyrics will be replaced byHsiang Yang's original and rather encouraging lyrics to be sung in Taiwanese.
The other day Vasary asked the vocalists if it was easier to sing in Taiwanese. Their reply was that it was easuer to vocalize in German.
Vasary revealed: "Since the concert will be in the open air, I will try to memorize all the scores after digesting them. I want to be a conductor with the scores in my head. Then I can have better contact with the orchestra."
Vasary, winner of the Franz Liszt competition in Budapest in 1948, will perform as piano soloist with the National Taiwan Symphony Orchestra at the Chung Hsing Hall in Taichung tomorrow, February 29. He will interpret Liszt.