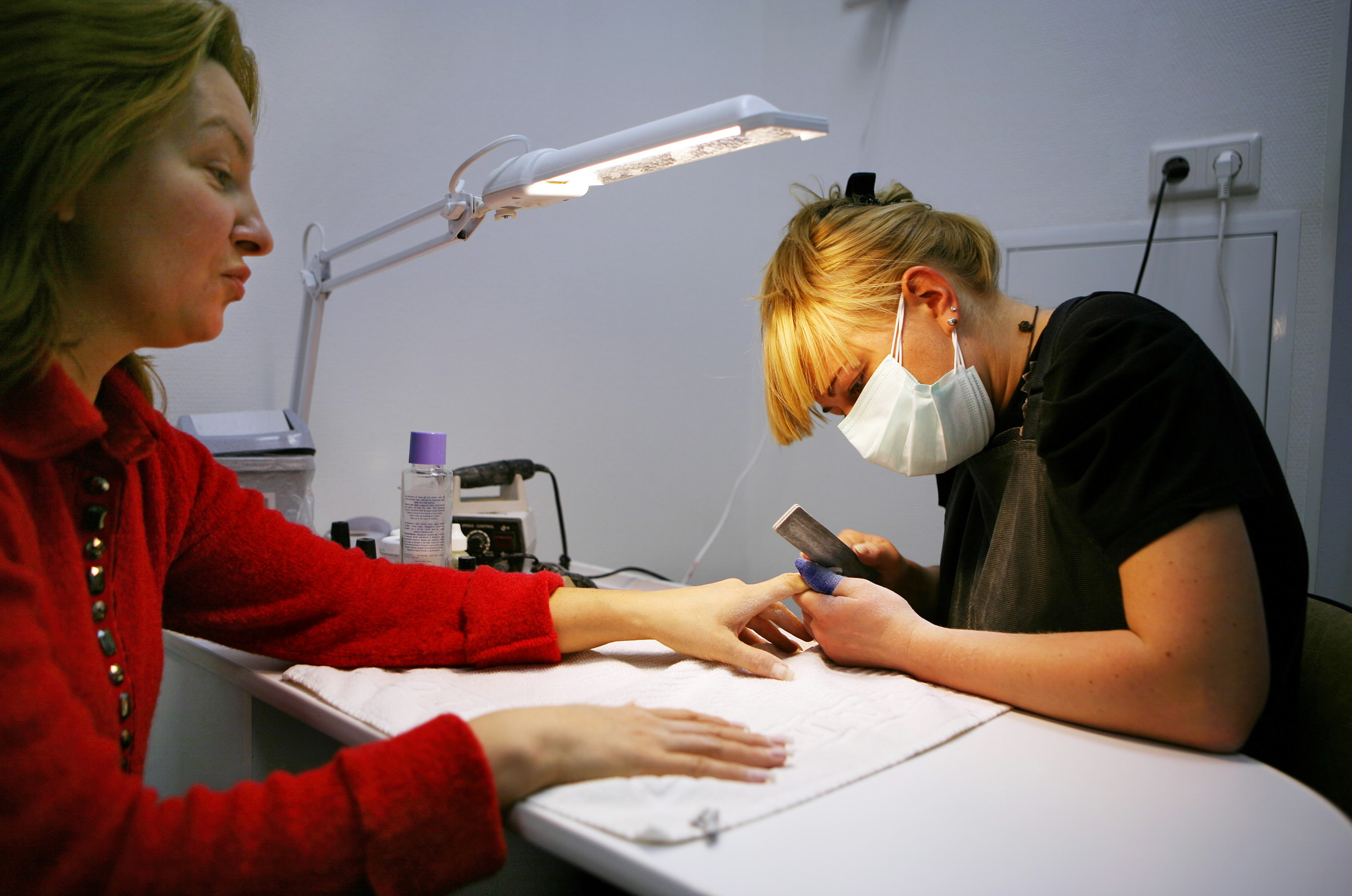 Yulia Barabasheva never wanted to have her own beauty salon. She's not even that passionate about nail design, despite having coached her mother to a Russian championship this year. But with a dream of securing a steadier income and starting a family, she opened her unmarked brown metal door to the public in April last year.
It took the help of her husband, Igor Barabashev, a businessman, to get US$180,000 in start-up loans and complete a six-month slog through Russia's formidable bureaucracy to obtain a license. Now, she and her staff of 14 take clients up to 12 hours a day, seven days a week, giving them thinner eyebrows or 5-inch nails.
At 25, Barabasheva is politically unengaged, like many of her "Putin generation." But she enjoys a rising prosperity, which Russians typically chalk up to Russian President Vladimir Putin. Serving that new wealth has opened the door to opportunities that would have been unheard of for average Russians just a decade ago. But even as Putin's Russia allows ever greater numbers of people, like Barabasheva, to move up the economic ladder, it demands a scrappy persistence to battle red tape and corruption while trying to get ahead.
"Moscow is a city that eats people up and doesn't leave any time for life," says Barabasheva, who has worked since she left home at age 14. "We have a kind of family atmosphere here [at the salon] and I don't want to destroy it for the world."
A reluctant entrepreneur in many ways, Barabasheva finds herself caught up in a life she didn't expect. Her hopes for a family of her own were shaken six months ago when she and Igor decided to separate, their relationship strained by the new business. But despite having lost the impetus for undertaking such a challenging venture, she remains resolutely committed to her middle-aged employees, many of whom would have difficulty finding new work in a society that prizes youth and glamour.
"I feel responsibility to them and I know none of them will ever fail me," she says, sitting in her office crammed with boxes and beauty supplies. "I can't just simply line them up and say, 'Thank you girls, you're free to go, I've decided to change my life.' "
Dramatic boost in wealth
Barabasheva and her employees are reaping the benefits of an economy tamed since the 1990s, when a few well-connected businessmen accumulated huge wealth while 40 percent of Russians lived in poverty. Her clients, shimmering in fur coats as they arrive, easily slot in US$80 monthly manicures between Mediterranean vacations and children's English tutoring sessions.
That shift toward broader prosperity, especially in Moscow, has been dramatic. In his first five years in office, Putin brought the poverty rate of his countrymen down to about 16 percent, according to the World Bank. Today, he said in a recent speech, it's less than 14 percent. Official figures put the middle class at about 20 percent of the population.
Barabasheva doesn't see herself as middle class, even though she runs her own business. In costly Moscow, she argues, people need to earn at least US$15,000 a month to qualify, and she doesn't. She is evasive about her earnings, saying only that she earns as much as she can and shares a percentage of profits with her employers. "I stand on my own two feet," she says firmly.
Barabasheva has proved her mettle before. Born to teenage parents on the outskirts of Moscow and in her own apartment by 16, she passed high school by showing up just for exams, and worked in construction and a liquor factory before turning to nail design to make a better living. As she describes the pressures she has faced during a rare break from work, a radiant smile and animated demeanor suggest that her persistence and love for those around her have, if anything, been fortified.
"In order to live, I've got to believe in something," says Barabasheva, who keeps a photo on her desktop of her celebrating her parents' 25th anniversary with them. "And I really believe I can give a lot."
Working painstakingly under a fluorescent lamp, her arms covered in fine nail dust, she passes long hours trying to make her 100 regular clients - some 90 of whom are single women - "feel well inside." Her clients - doctors, entrepreneurs, and even top figure skater Elena Sokolova - leave happier, and not just because their hands are more beautiful, she says. They nourish her as well, she adds - enriching her mind with their experiences and expertise until she has a chance, someday, to finish her college degree.
Looking beyond appearances
For Barabasheva, her employees are more than professionals. The family atmosphere she has tried to cultivate has borne fruit: they're a crucial support to her as she goes through her second divorce at age 25.
"For the first time, I felt I was quite empty and couldn't give anything to anyone," she says. "But my clients and all my staff helped."
Her staff are all women, since she has been underwhelmed by former male colleagues. "They have almost nothing left of a man in them," she says despairingly. And it's not just colleagues: In general, she yearns to see men show more responsibility and devotion to their families ?though she doesn't criticize Igor, with whom she says she is still friendly.
"There is something wrong in the society. Nobody looks inside, into your soul, but everyone is looking at your face and your figure - appearance is everything," says Barabasheva, who sees her salon as countering that through female camaraderie. "I think it is the women who are to blame for that. Everything is on sale. We sold ourselves.... I always thought that being rich leads to degradation, but being poor also leads to a degradation."