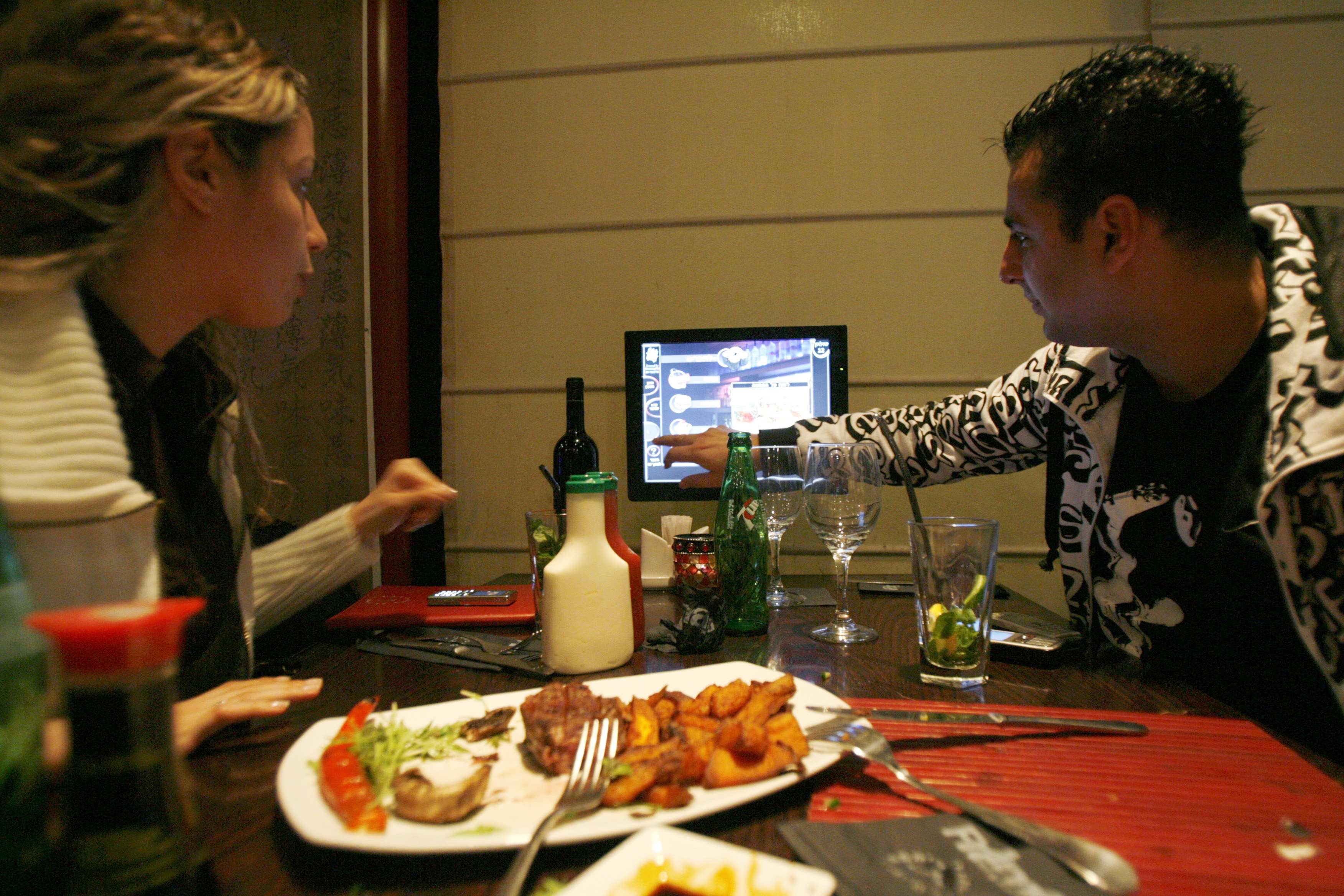 Enter the e-waiter.
Restaurants in Europe, the United States and Japan are testing technology to let diners order their food direct from a screen at their table instead of depending on a fellow human being to note their choice - sometimes grumpily or erroneously.
Besides cutting costs, companies that sell the "e-menu" argue the bytes-for-bites approach has a novelty value that can lure younger customers, and boost revenues as tantalizing photographs of succulent steaks and gooey desserts tempt diners to order more.
It also could extend the TV dinner. How about a computer-game dinner?
The idea may be only the latest gimmick in a trade which is driven by consumer appetites and where fads help. But at least for now, it appears to be boosting business.
In Israel, start-up Conceptic has already installed e-Menu technology in sushi bars, pubs and family restaurants. The system is based on touch-screens already used in self-service canteens or for ticketing in airports and cinemas.
"It's about impulse-buying," said Adi Chitayat, Conceptic's chief executive. "If a person starts looking at pictures of chocolate cake, the chances are he'll order it."
The firm has also supplied its systems to restaurants in France, South Africa and Belgium.
Frame, a trendy sushi restaurant in Tel Aviv, said sales on tables with the e-Menu have increased by about 11 percent. Customers often call ahead to reserve spots equipped with the screens, manager Natalie Edry told Reuters.
At one of the e-Menu tables, information technology worker Gil Uriel and his young family were enthusiastic as they checked out pictures of the dishes on offer and squabbled over desserts.
"It's more visual," said Uriel, as his children clicked away furiously on a games function between courses. "We can still choose, we can still argue - but it's much easier when you can all see it."
In Japan, a company called Aska T3 has produced a similar system. But the field is attracting more than startups.
Microsoft says its new Microsoft Surface system, which transforms an entire table into one big touch-screen, is due to go live in spring 2008 in some U.S. hotels and casinos, letting customers order food direct as well as play music and games.
The Seattle-based giant says on its Web site it will "transform the way people shop, dine, entertain and live." Both Conceptic and Microsoft argue their examples of interactive and communal technology represent the future.
"We are living in a technology age," said Conceptic's Chitayat. "People are not afraid of screens." The company, which launched its pilot in 2006, expects to turn a profit in mid-2009, he added.
Chitayat said taking computers into restaurants is an obvious next step after technology revolutionized the workplace, although he noted restaurants with the e-Menu - including Frame - still rely on waiters to deliver the food.
His company is also piloting a Web-based version, to let customers log on to a restaurant's WiFi Internet network and place their orders from their own laptops, hand-held computers or cell phones.
But many diners doubt the e-menu idea will take off.
"I don't believe in screens, I believe in humans," said businessman Yoash Torkman as he lunched at Frame. "I'll wait for 15 minutes for a waitress instead of using this. It's a gimmick and gimmicks have very short lives."
In Europe, where dining out is a time-honored tradition as much about good conversation and etiquette as staving off hunger, waiting staff were unsurprisingly circumspect.
"See this man here? He's been coming here for 25 years," said a waitress at Italian restaurant in Brussels, who gave her name only as Giovanna. "I know his wife, I know his daughter. Do you think it would be better if he was welcomed by computer?"
Some analysts also wonder if the appeal will extend beyond early-adopters like the Frame customer Uriel, to evolve into a tool that changes the way people eat out.
"There are always some people who embrace a new technology but others will avoid it for as long as possible," said Jackie Fenn, emerging technology analyst at Gartner consulting group.