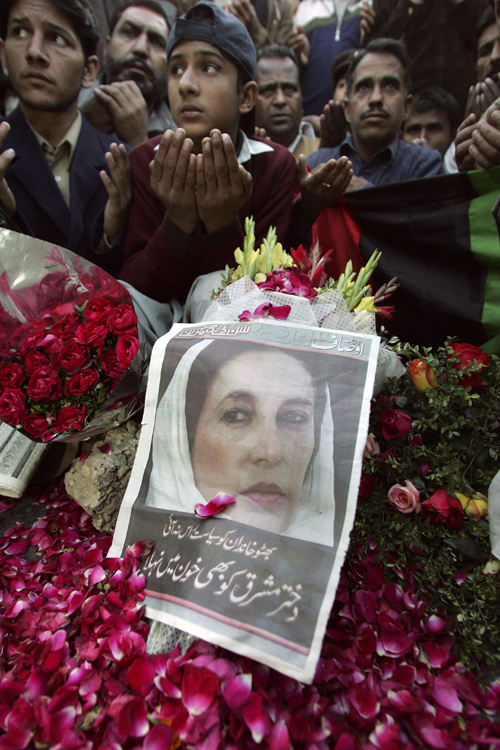 Pakistan's crucial January 8 parliamentary elections are likely to be postponed up to four months following the assassination of Pakistan's opposition leader Benazir Bhutto, a spokesman for the ruling party said yesterday.
In a related development, a key opposition party said it would reverse an earlier decision to boycott the vote if Bhutto's group decided to run. Bhutto's Pakistan People's Party was expected to announce its decision later yesterday.
"We will definitely contest the elections if the PPP decides to contest," said Sadiq ul-Farooq, a senior member of former Pakistan Prime Minister Nawaz Sharif's Pakistan Muslim League-N party.
Bhutto's death in a suicide attack on Thursday has sparked a wave riots by her supporters and thrust Pakistan deeper into political uncertainty.
The participation of both main opposition parties would boost the credibility of the elections, meant to usher in democracy after eight years of military rule under Pakistan President Pervez Musharraf.
Ul-Farooq said Bhutto's widower, Asif Ali Zardari, had told Sharif during a meeting Saturday that Bhutto wanted to contest the elections and that she had told her party to do so even if she was assassinated.
Officials of Bhutto's party could not immediately be reached for comment on that.
Speaking earlier, Tariq Azim, information secretary of the ruling Pakistan Muslim League-Q, said the vote would lose credibility if it was held on schedule, with Bhutto's party in mourning and other opposition groups intent on boycotting. He expected authorities to announce a delay in the January 8 schedule within 24 hours.
"How long the postponement will be for will up to the Election Commission," he told The Associated Press. "I think we are looking at a delay of a few weeks ... of up to three or four months."
The caretaker government said it had started consultations with political parties but there was no immediate plan to reschedule the elections.
The Election Commission is due to hold an emergency meeting today to decide how to proceed.
Azim referred to the destruction of several election offices in rioting as another reason for delaying the vote. The commission has said that hampered the printing of ballot slips and the training of poll workers.
Azim said the caretaker government has already suggested a conference of all Pakistan's political parties on how to conduct the vote.
"Dialogue is imperative so a new date is agreed with the opposition parties to make the elections meaningful. To have the elections now while (Bhutto's) Pakistan People's Party is still in mourning, to expect candidates to go out campaigning is unfair," said Azim.
"The elections will lose credibility," he said.
Opposition parties have claimed the elections are likely to be rigged because of alleged bias in the Election Commission and the caretaker government, but appear reluctant to leave the field open to the ruling party, which supports Musharraf.