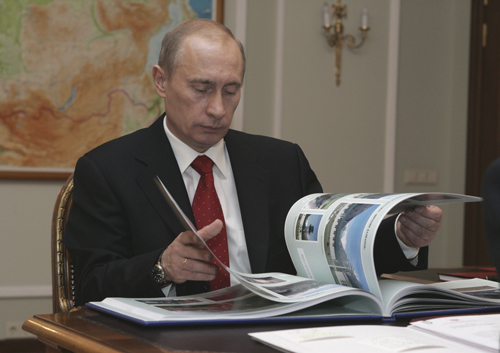 For Russia, 2007 was the year where almost everything in and outside the country revolved around one man: Vladimir Putin.
In a momentous 12 months, Putin confronted the West and entrenched his authority at home in revivals of what some see as both Cold War tensions and Soviet-style authoritarianism.
Seen from outside, "the Russia year" got off to a sobering start when, in an address in Munich in February, Putin openly challenged the United States, accusing Washington of attempting to dominate the world.
Prior Kremlin billing of an "important foreign policy speech" could not have prepared the world for that unexpected blast of geopolitical invective or for the chain of events that followed.
Repudiation of arms treaties, renewed long-range nuclear bomber patrols, a threat to retarget nuclear missiles at European capitals: These are some of the ways that Russia showed its unhappiness with the security status-quo.
Yet as relations between Moscow and the West seemed to worsen by the day in 2007, Putin stuck to his argument that Russia's actions were an answer to steps already undertaken by the West against Russia.
Moscow cites expansion of NATO, unilateral abrogation by the United States in 2001 of the Anti-Ballistic Missle Treaty, refusal by NATO states to apply a conventional arms limitation pact, and patrols near Russia of NATO aircraft as examples of the West's pressure.
The biggest thorn in Russia's side however - and the project that seemed to provide the backdrop to virtually all discussions between Moscow and Washington - was the plan for deployment of a U.S. missile defense system in eastern Europe.
Though the United States shrugged the suggestion off as "ludicrous," Russia insisted the system was a potential security threat and challenged Washington to open its plan to cooperation with Moscow, an offer so far greeted coolly.
On a range of other international diplomatic issues - the standoff over Iran's nuclear program and the future of Kosovo among them - Russia showed that, for better or worse, it was again a voice the world had to reckon with.
After years of apparently fruitless diplomacy on Iran, 2007 ended with Russia making its first deliveries of nuclear fuel needed to power the Islamic state's first nuclear power station.
Not everything involved saber rattling for Russia in 2007. In July, Russia was awarded the 2014 winter Olympic games after an intensive lobbying campaign and the country was overjoyed by its football team's 11th-hour qualification for the Euro 2008 football competition.
At home, Putin's sway over the political process at home was all but total as he prepared to keep power even after leaving the Kremlin next spring.
Viewed inside Russia, the year began with intensifying speculation about how - and whether - the 55-year-old Putin would leave office at the end of his second and last consecutive term.
That speculation grew when Putin said in the spring that he planned to retain "influence" in Russian politics after leaving office and by the autumn it was less a question of whether he would try to retain power than how.
The "how" became clear this month, when Putin led the ruling United Russia party to a crushing victory in parliamentary elections, designated his chosen successor and then said he would remain at the head of government - in the post of prime minister - if his chosen successor replaced him in the Kremlin.
"In very general terms, Russia in 2007 stepped further down an irreversible path toward transformation into a semi-authoritarian state," said Alexei Sidorenko, a political analyst at the Carnegie Moscow Center.
The parliamentary elections were held December 2 and presidential elections are scheduled for March 2.
"The whole year was about preparing these elections, for making these elections happen, for producing a candidate" to succeed Putin in the Kremlin so that Putin can stay on as prime minister, Sidorenko said.
"That was the whole motive. All reform stopped. Everything that happened this year was to prepare the ground for this."
The central role of Putin, both in Russian domestic politics and in world affairs in 2007, was summed up neatly by the U.S. news weekly Time, which designated Putin the Person of the Year.
The designation "is a clear-eyed recognition of the world as it is and of the most powerful individuals and forces shaping that world - for better or for worse," Time said in a note accompanying its cover story on Putin.
As Russia's ruling elite lined up behind Putin to solidify their grip on power in the country, they also made sure, through new electoral regulations and strict state control of most national broadcast media, that real political opponents were ostracized, marginalized, silenced.
"I'm not fighting to become president. I'm fighting to make sure there are real elections in Russia." That is how chess legend and Putin critic Garry Kasparov, whose political activities are barely known in Russia, described his quixotic drive to unseat Putin at the ballot box.
But with the popular Putin at its helm, the United Russia party won around 64 percent of the votes in the parliamentary vote and Putin's chosen successor, Dmitry Medvedev, is seen as virtually certain to win the presidential election in March.
Meanwhile, as the world's largest energy producer Russia continued in 2007 to pull in record windfalls from sales of oil and gas while foreign direct investment in Russia continued to climb despite a business climate widely seen as difficult.