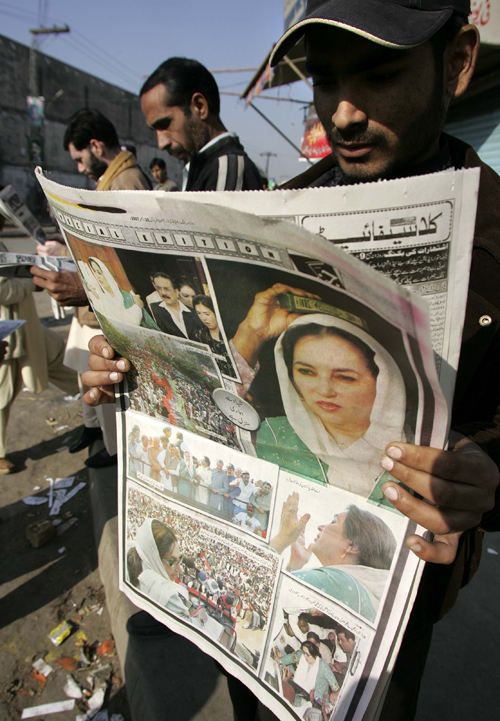 As with other assassinations in Pakistan's bloody political history, the world may never know who killed Benazir Bhutto - but there is no shortage of potential culprits to choose from, analysts say.
There could be almost as many motives as well, in a country with a murky nexus of intelligence agencies, dozens of Islamic militant outfits, hundreds of tribal clans and an army whose reach extends to every corner of Pakistani life.
While the government was quick to point a finger at al-Qaida, that name is little more than a convenient catch-all for a staggering array of militant groups, and the reality is vastly more complex, analysts say.
The government's ties with Islamic militants, whether training them to fight in Kashmir or jockey for power in Afghanistan, leave the state apparatus itself with questions to answer, they say.
"It is common knowledge that some of the intelligence agencies have maintained links with militant and sectarian groups, dating back to the Soviet military intervention in Afghanistan," said political analyst Hasan Askari.
"Even after Pakistan joined the global war on terrorism, there was always doubt whether these agencies fully severed their connections to militant elements," said Askari, former head of political science at Punjab University.
The leaders of Pakistan's three intelligence agencies are all current or retired members of the military, which has run the country for more than half its existence - and has its own chequered history with the Bhutto family.
After Bhutto survived the worst terror attack in Pakistan's history in October, she blamed remnants of the regime of General Zia ul-Haq, who toppled her father from power in 1977 and had him hanged two years later.
Musharraf's woes
President Pervez Musharraf was head of the military when he seized power in a 1999 coup and remained army chief until just over a month ago, giving up a lifelong career in uniform only after intense pressure to bring Pakistan nominally under civilian rule.
Meanwhile his decision to become a U.S. ally after September 11 enraged Islamic hardliners, who have everything to gain from fostering turmoil, which dissipates the state's ability to rein them in.
"Their aim is to have a safe haven in Pakistan from where they can carry out an agenda of radical Islam," said a top government counter-terrorism official who could not be named.
"Their action plan is to eliminate leaders and strike at targets which could deeply hurt state institutions," the official said. "Their long-term plan is to destabilize Pakistan, as that would give them space to move around."
Adding to the mix of home-grown militants, Pakistan's northern tribal areas became a safe haven for the hardcore Arab leadership of al-Qaida, including Osama bin Laden, after they escaped from Afghanistan in November 2001.
From this unruly mountainous region al-Qaida has plotted a global terrorist war that has included two attempts to kill Musharraf and the 7/7 London underground bombings.
Popular appeal
If the jumble of disparate militant groups may once have had different goals, they were united by a hatred of Bhutto, whose enormous popular appeal and pro-U.S. stance were a major obstacle to their objectives.
Analysts say her elimination - capping a year of unprecedented militant violence that has left more than 800 people dead - can only be seen to undermine Musharraf's assertions that he has brought radicals under control.
"Ultimately, governments have to accept responsibility for the circumstances under which such acts take place," said Rasul Baksh Rais of the Lahore University of Management Sciences.
"Although the government would not appear to benefit from Bhutto's assassination, it cannot absolve itself of responsibility," Rais said. "The Musharraf government has many questions to answer."
The government's explanation of how she died - it said she hit her head on a vehicle sunroof - and its outright rejection by Bhutto's party will add to those questions.
Pakistan has a long history of not answering those questions.
General Zia, Bhutto's brothers Murtaza and Shahnawaz and Pakistan's first prime minister Liaqat Ali Khan all died in mysterious circumstances, and debate still rages today over who was responsible.
"Given the track record of high-profile political assassinations in Pakistan, one does not expect the investigation of Bhutto's killing will uncover the real culprits," analyst Askari said.
"Such murders do not get solved," he said. "They remain open forever."