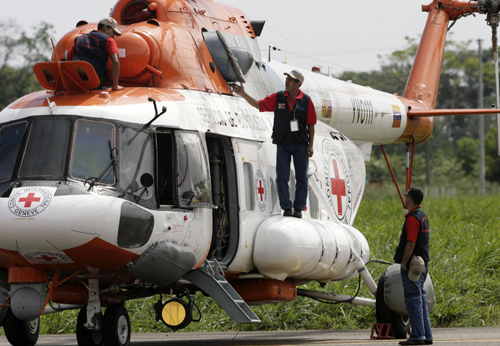 A Venezuelan-sponsored plan to free three hostages held by Colombian rebels was stalled by the guerrillas' failure to reveal their location, and Venezuelan President Hugo Chavez said it may unravel if the stalemate drags on.
Concern was growing yesterday about the mission to release two former Colombian politicians and the young son born to one of them in captivity as the Revolutionary Armed Forces of Colombia, or FARC, withheld their whereabouts after weeks of promising to free them.
Chavez negotiated the rescue effort with the FARC and had initially hoped to see the release take place on Thursday.
"If this were to drag on three or four or five days, for security reasons, it could collapse and we would have to think of something else," he said late on Saturday.
The leftist firebrand was not the only one voicing concern.
"The question is why is it taking so long for the FARC to give the coordinates. They were the ones who proposed this hostage release," a senior Colombian government official told Reuters, asking not to be identified.
Others involved in planning the hand-over said there was still time for the FARC to say where it was keeping Consuelo Gonzalez, Clara Rojas and her son Emmanuel, who was fathered by a guerrilla fighter and is thought to be 4 years old.
"We do not have the coordinates but we could get them at any time, and then we expect the mission to move along," said Yves Heller, spokesman for the International Committee of the Red Cross, which is helping coordinate the hand-over.
Rojas was captured in 2002 and Gonzalez in 2001.
Foreign envoys flew to the central Colombian town of Villavicencio on Saturday to observe the mission. Among them were former Argentine President Nestor Kirchner, officials from France and Switzerland and U.S. film director Oliver Stone, who is making a documentary about Latin America.
"We all want to see this mission go well," Stone told reporters in Villavicencio. "President Chavez is very unselfish and is really trying to make this work."
The Venezuelan leader sent two helicopters into Colombia on Friday, but they remained grounded in flat, hot and humid Villavicencio at the foot of the Andes mountains.