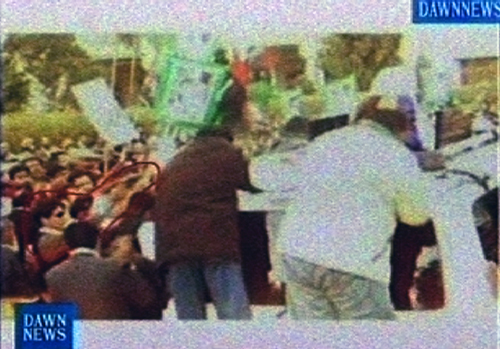 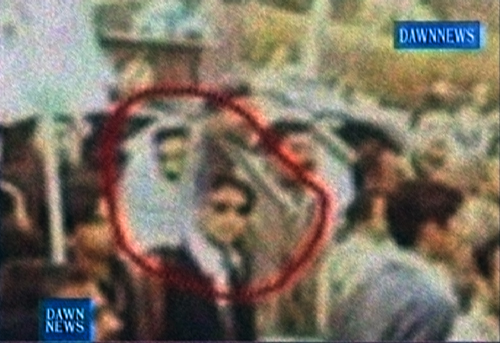 A Pakistani television channel broadcast yesterday grainy still pictures of what it said appeared to be two men who attacked and killed opposition leader Benazir Bhutto.
Former prime minister Bhutto was killed in a gun and bomb attack on Thursday as she stood up through the sun-roof of her bullet-proof vehicle to wave to supporter as she left an election rally in the city of Rawalpindi.
The government has blamed al-Qaida.
Dawn News Television showed three pictures it said it had obtained from an amateur photographer.
One showed two men standing in the crowd outside the rally ground before Bhutto left.
One was a clean-cut young man wearing sun glasses, a white shirt and dark waist coat. Behind him stood a man with a white shawl over his head, who Dawn said was believed to be the bomber.
Two other photographs showed the clean-cut man pointing a pistol at Bhutto as she left the rally.
He appeared to be about 3 meters from Bhutto, standing on the left of her vehicle, pointing the gun with his right hand as she faced away from him.
Authorities said three shots were fired at Bhutto moments before a suicide bomber set off explosives. As well as Bhutto, 23 people were killed.
Authorities have not said how many attackers they believed were involved.
Senior police and government officials declined immediate comment saying a four-officer team was handling the investigation.
The government said Bhutto was killed when the force of the blast smashed her head into a lever on the sun-roof, which fractured her skull.
Her party dismisses that as "ludicrous" saying she was killed by a bullet in the head.
Doctors did not carry out a post-mortem of Bhutto's body on the instructions of her family, officials say.
The Interior Ministry said on Saturday her body could be exhumed for more tests if her party wanted.