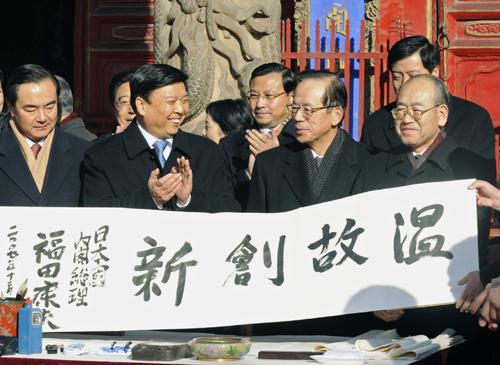 Japanese Prime Minister Yasuo Fukuda was set to visit the birthplace of the ancient Chinese philosopher Confucius yesterday to wrap up a four-day visit to China that has seen a warming of relations between the countries.
The visit to Qufu will demonstrate "the common cultural background between the Chinese people and Japanese people," said Japanese foreign ministry spokesman Mitsuo Sakaba.
The Japanese leader toured a Toyota plant in the industrial port city of Tianjin on Saturday after talks with China's Premier Wen Jiabao on a range of issues, including arrangements for China's President Hu Jintao to visit Japan in 2008 - the first such trip by a Chinese head of state in 10 years.
Earlier Saturday, Fukuda met Chinese schoolchildren and tossed a baseball with Wen, in some lighthearted moments a day after talks to improve historically strained ties with China's leaders.
Wearing baseball uniforms, the two premiers played catch after a breakfast meeting at a state guesthouse. They laughed, joked and chased stray balls as journalists and a half-dozen Chinese players looked on.
Wen wore a gray jersey from Kyoto's Ritsumeikan University, where he played baseball with students during a visit to Japan in April. The back of the jersey had his name and the number 35 - for the 35th anniversary of Japan-China diplomatic relations. Fukuda, a baseball player in high school, wore a plain red and white uniform.
"Prime Minister Fukuda said the spring has come in our relations and after 2 1/2 hours of talks, I truly feel that the spring of China-Japan relations has indeed arrived," said Wen.
Fukuda's China visit has been hailed by both sides as a success and has produced agreements to cooperate on fighting climate change and increase youth exchanges.
Tokyo is eager to help China tackle pollution problems that are increasingly felt across the sea in Japan. Officials also discussed North Korea.
"China-Japan relations have never faced this kind of opportunity, and I believe China and Japan should become creative partners to build a better Asia and world," Fukuda said Friday in a speech at Peking University, calling both countries "major presences in the world."