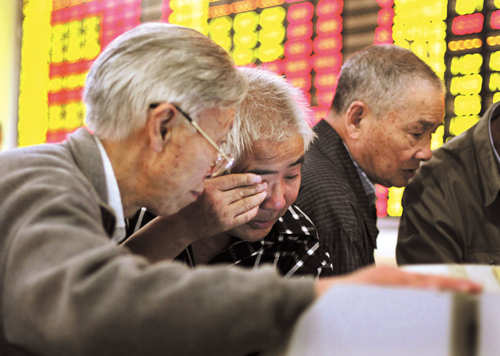 This year, the world discovered the Chinese stock market.
Investors in China poured their money into shares like never before, sending the market on a turbulent, stunning, record-breaking ride.
And around the world, people took notice: In February, for the first time ever, a plunge in Chinese stocks triggered a global market sell-off, suggesting the potential sway this heretofore ignored market will have in years to come.
China's market quickly recovered and the Shanghai Composite index went on to soar 97 percent this year, making it the world's best-performing major benchmark index.
But the year ahead isn't going to be as rewarding, analysts say - and the volatility will likely continue.
"It was a nice rally," UBS economist Jonathan Anderson wrote in a recent report. The market in 2008 "may not be nearly as exciting."
While many Chinese believe that authorities will to try to keep the markets on an even keel ahead of the Beijing Olympics in August, other risks loom.
Beijing is struggling to keep inflation in check and could continue to raise interest rates. Also, the mortgage crisis in the U.S. has raised the risk of a recession that might sap demand for Chinese exports.
Jason Zhou, 37, is among the legions of Chinese stock investors who were chastened by the market's roller-coaster performance this year.
Zhou, who works for a foreign trade company in Shanghai, bought shares in oil and gas giant PetroChina just after it listed shares on the Shanghai Stock Exchange in November at 43 yuan (US$5.90).
Normally, such elite state-controlled companies have seen huge, sustained gains after IPOs on domestic bourses.
But PetroChina, whose market value, according to some methods of calculation briefly surpassed US$1 trillion after its local market debut, has fallen back to just above 30 yuan (US$4.10) per share, still nearly twice its IPO price.
Zhou cut his losses and sold when the shares fell to 38 yuan (about US$5.20)
"The loss is not huge, but it's impressive enough," Zhou says. "This was not a pleasant experience."
Neither was the 8.8 percent plunge in the Shanghai index on Feb. 27, which spooked investors around the world and was one of several gut-wrenching drops this year.
In another sign of China's growing market muscle, Shanghai became the second most popular place for initial public offerings behind New York as companies raised US$48.62 billion through November, according to the World Federation of Exchanges.
That surpassed the US$31.81 billion raised in IPOs in Hong Kong and the US$43.47 billion chalked up in London during the 11-month period, the federation's numbers show. Only the New York Stock Exchange, with US$52.06 billion, had more.
However, despite the rising prominence of China's two main stock markets in Shanghai and Shenzhen, they still severely restrict foreign participation and are largely walled-off from the rest of the world.
Overseas companies are barred from listing on them and foreign individual investors can only buy limited quantities of yuan-denominated "A shares" through designated "qualified foreign institutional investors." Those so-called QFII purchases are capped at US$10 billion, though that ceiling is due to triple soon.
China's markets still exist mostly to raise money for state companies - the reason they were set up in the early 1990s.
In 2007, PetroChina, coal miner China Shenhua Energy Co. and China Construction Bank Corp. heeded the government's call to return to local capital markets to raise funds and improve the quality of listed companies.
Among the IPOs up next: China Mobile, the country's largest mobile service provider, which plans to raise US$10 billion or more in a listing in coming months.
Reforms aimed at combatting rampant price manipulation and other abuses, improving shareholding arrangements and strengthening corporate disclosure requirements helped restore investor confidence after years of devastating scandals kept share prices mired in multi-year lows.
But as far as Zhou is concerned, they haven't gone far enough.
"Listed companies in China seem to have more freedom than elsewhere to choose what they want or don't want to disclose," he says. "That's so unfair to investors, especially our individual investors."
Still, many analysts and investors remain bullish about China, given its booming growth. The economy is forecast to grow close to 11 percent next year once again, despite efforts to curb investment and cool inflation.
"Don't be too panicked about the experience with PetroChina," says Chen Huiqin, an analyst at Nanjing-based Huatai Securities. "The IPOs of big state-owned companies are still full of potential."
Since mid-October the market has slumped after regulators, fearing that prices were rising too quickly, suspended sales of mutual funds to new subscribers.
That ban ended in late December, spurring a modest rally, but prices so far show no signs of shooting skyward. Since hitting a record of 6,124.04 on October 16, the Shanghai index has fallen 14 percent. On Friday, the last day of trading for the year, it closed at 5,261.56 points.
Wang Mingxuan, a 53-year-old retiree, said she's pleased so far with how her investments have fared, despite the recent market doldrums.
She isn't counting on an Olympics rally, but nonetheless is betting on stocks whose businesses should benefit from the Games, such as China Telecom and Air China. The latter is an Olympics sponsor.
"But the risk is always very high, and the government can't protect you," Wang said while watching the price boards scroll by at a Beijing brokerage. "You come here for a fight, not for fun. You should learn things about the market or else nobody can help you."