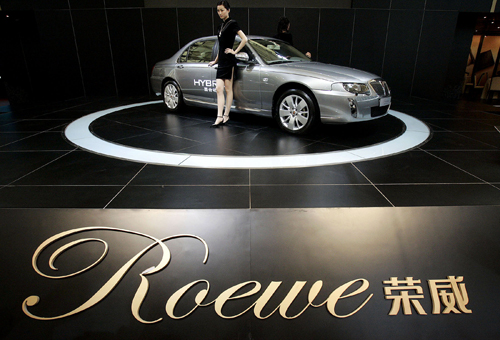 The merger of two of China's state-run auto makers comes as its domestic market booms and as the quickly accelerating nation gears up to compete with top global brands, industry officials said.
The merger announced Wednesday between Shanghai Automotive Industry Corp (SAIC), one of China's largest car groups, and rival Nanjing Auto is one of the biggest-ever tie-ups between mainland vehicle makers.
The deal is aimed at building the group into a "world-class" firm, SAIC chairman Hu Maoyuan said at the signing ceremony.
"China's automotive industry needs to raise its capability to reinvigorate itself and find its own area where it can compete internationally, this is why we must go down the road of mergers," he said.
The SAIC buyout came amid government calls for local car companies to consolidate and end a fierce rivalry that worsened when SAIC and Nanjing both bought parts of Britain's MG Rover.
In the deal, Shanghai-based SAIC will pay 2.1 billion yuan (US$287 million) to Nanjing Auto's parent, Yuejin Motor, in exchange for the vehicle and core auto parts assets of Nanjing Auto, which owns the MG car brand.
In return, Yuejin Motor will receive 320 million SAIC Motor shares from its parent SAIC - which bought the rights to two Rover models in 2005 - equivalent to about five percent of the listed company.
The deal comes as Chinese auto sales are likely to hit or surpass 8.7 million units in 2007, 20 percent more than the previous year, according to figures published Saturday by the China Association of Automobile Manufacturers.
In 2006, more than 7.2 million autos were sold in China, more than in Japan and second only to the United States.
Battered by rocketing oil prices and economic recession, European, American and Japanese auto markets are stagnating, while in China, according to Xinhua news agency, up to 10 million Chinese households are eager to buy cars as soon as incomes rise and car prices drop.
Analysts reacted warmly to the merger which they said would strengthen the local industry as it seeks to compete with foreign rivals.
"This is good news for SAIC and for Nanjing and the industry as a whole," Liu Shuofeng, an analyst with CEL Venture Capital.
"Consolidation among automotive companies should secure the local auto sector's future, as companies turn bigger and better to face competition."
Wang Mingchun, of TX Securities Consulting in Beijing, said: "China's constructors will depend on the domestic market for the coming five to 10 years, then after they develop better products they will look to foreign markets."
China's auto exports amounted to about 1,000 units in 2003, but grew to 170,000 in 2005 - a number higher than those imported during the year - but largely exported only to emerging markets.
SAIC, which is keen to build its own brand cars even though it has China-based joint ventures with General Motors and Volkswagen, wants the MG brand as a platform to boost sales internationally.
"We will continue to promote the MG brand on the overseas market to boost our exports," SAIC Motor president Chen Hong said at a briefing in Beijing.
Chen said SAIC would also revive production in Britain of the MG brand as early as possible.
The merger came as Nanjing Auto said it was ending its sedan joint venture with Fiat of Italy, while five days before the deal was revealed, General Motors announced it will sell over one million vehicles in China this year.
The U.S. automaker, which with Volkswagen, owns the biggest market shares in China, has become the first constructor to surpass the mythical one million car barrier in a year, a feat attained largely with the help of its 10-year joint venture partner SAIC.
GM's growth in China has been as remarkable as the nation's overall industry growth, with sales hitting 100,000 units in 2002 and growing to 500,000 vehicles by 2005.
Meanwhile French group PSA, in a joint venture with Dongfeng Motor, sold 200,000 Citroens and Peugeots vehicles in China in 2006, and expect to sell a total of 450,000 units in 2008 and 2009.