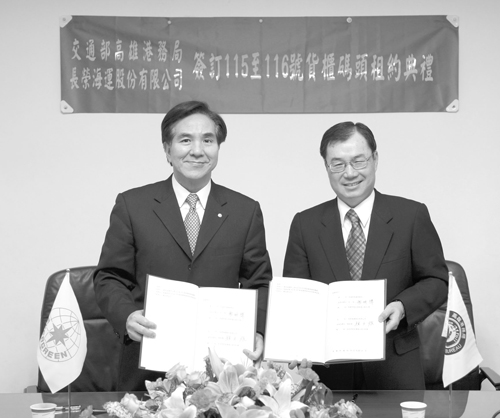 Evergreen Marine Corp (Taiwan) Ltd, which currently operates two large container terminals in the Port of Kaohsiung, has extended its lease on its Container Terminal No. 4 facility (Piers 115 and 116) for a further 10 years.
The lease extension contract, which covers the period from March 1, 2008 to February 28, 2018, was signed by EMC's President, Jack Yen, and Director-General of the Kaohsiung Harbour Bureau, Shieh Ming-hui, at the Evergreen International Building in Taoyuan on December 27.
Container Terminal No. 4 opened for business in 1987 on a 206,480m2 site with a total quay length of 596m. The berths are served by six post-Panamax gantry cranes, 26 rail mounted gantry cranes and six empty container stackers.
In addition to Container Terminal No. 4, Evergreen also operates Container Terminal No. 5, which comprises three berths (Piers 79, 80 and 81).
Speaking at the signing ceremony, Yen said:
"This latest contract follows on from Evergreen's extension of the lease on its three berths at Kaohsiung's Container Terminal No. 5, which was signed this summer. The lease extensions are part of our strategy to provide customers with efficient one-stop transport services at lower operational costs through investment in upstream and downstream businesses."